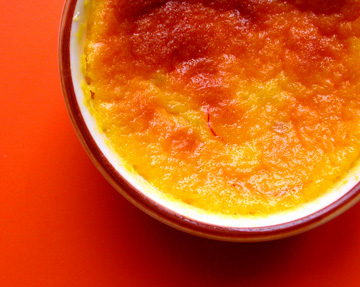 text shall follow shortly... Now it has. This is Saffron and Stem Ginger Cheesecake, based on a Gordon Ramsay recipe. Saffron seemed to me a rather unusual ingredient for cheesecake, and so did ginger (albeit not as unusual as saffron). 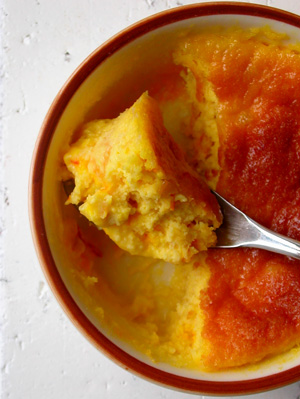 I know, you can sort of spot a strand of saffron on the surface of the cake in the image, but it'd be unlikely to guess that there's ginger in it. 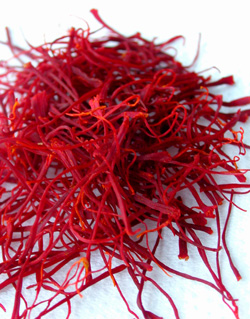 Saffron, an indispensable spice for Spanish paella, is normally quite high-priced, but considering how small an amount you usually need at a time, it actually isn't too bad - although I wish I had gotten it in a smaller portion, even if I only got 1 gram (0.0353 oz!). 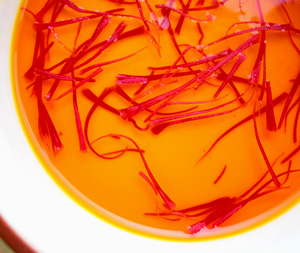 I first toasted saffron strands very lightly, then soaked them in hot water. I have always wondered how come these scarlet shreds would give out such near-fluorescent yellow. 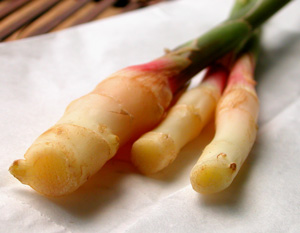 The other featured flavor in this cheesecake is stem ginger, which is rarely, if at all, found in Japan. It is basically young ginger roots preserved in syrup, so I tried and reproduce something similar using first-of-the-season young ginger. 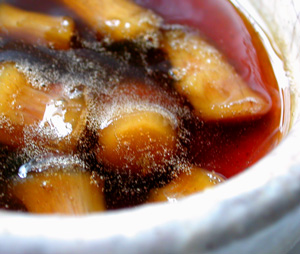 I cooked some ginger roots first in plain water, changing water several times, then in water, brown sugar, and honey. The ginger didn't get as tender as stem ginger should be, but I at least got syrup that resembled that of stem ginger. I decided to add some store-bought crystallized ginger bits.

Now the cheesecake batter, as with most other cakes I'd usually make, was quite easy to whip up. It should contain mascarpone cheese, creme fraiche and soured cream - and I just used mascarpone and sour cream, as creme fraiche also doesn't seem to exist in this country (sigh). 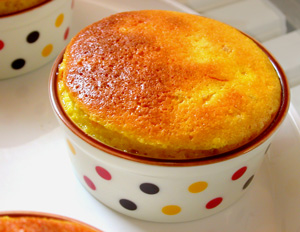 Other than that, I followed the recipe - well except that I didn't bother to make sponge base but simply baked the cheesecake in small ramekins. 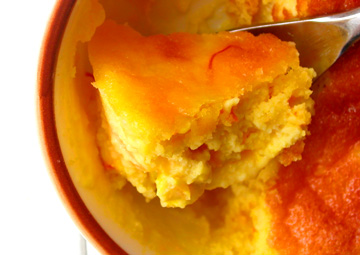 The cake rose prettily and then sunk. I chilled them overnight before having a bite, and the cakes had nice and moist, and yet light texture thanks to whipped egg white. Saffron definitely added a character to both flavor and color, whereas ginger wasn't all that prominent, which I wished it had been. It was really interesting to taste saffron in sweet stuff, I'd definitely explore this further (and I've got loads of saffron left!).
posted by chika at: 4/21/2005 01:52:00 PM

Is it creme brulee? Looks so yummy!

Hmm...custard? Can't wait for the post - i'd like to find out what makes it such an orangey-red (blood oranges?) ^^

Is it a "creme brulee" with saffron inside ??? One of my favourite ;-)

I suggest you to do a saffron cake. Ther cake base can be a pound cake, a "genoise" or a madeira (without any of the traditional flavours). You just add the saffron and its infusion inside the dough (and you need quite a lot (about 20 strands). It's a really subtil cake and it go well with a cup of green tea.

Reid - no-no, creme brulee's got to have that crisp surface! ;) this was yummy, nevertheless.

Tea - well it was sort of like custard, actually. Saffron was the trick!

Estelle - I think I will try pound cake or maybe madeleines(-like small cakes, to be precise) with added saffron... thanks for a great insight as always!

Oooh, saffron and ginger cheesecake. Sounds yummy and looks so good. Too bad the ginger flavor wasn't so pronounced. I just made some ginger sorbet which was quite good!

hi chika-san! so beautiful, per usual. i'm sorry the ginger wasn't so pronounced as well, but i love the idea of using saffron in sweet things. are those the cheesecake factory cups you've used?

This dessert was so beautiful, but all I could think was, "Oh my goodness - look at all of that saffron!" I hope you are able to get it cheaper where you are than here in the States... as much as went into the recipe, I couldn't even imagine spending so on my foodish experiments. Perhaps that's what defines you as a step above in food blogging, eh? I love the idea of the flavor combination though. I'm an enormous fan of ginger, but have never thought to add it to cheesecake...

Thanks for sharing it with us!

Reid - ginger sorbet! that's a winner. I really want to try this cheesecake again, but I've got too many other recipes I want to try, too :P

Journey Girl - ginger cheesecake is quite good, you should give one a try someday!
This time I got 1g of saffron for approx. US$8, but later I found a $4 one in another place. oh well, mine looks prettier - what else can I say?? hope you can find something at reasonable cost over there.

Saffron is wonderful isn't it! I really enjoyed your blog and the beautiful photography. I'll be sure to visit again.

where did you get those bowls?, they are amazing!!