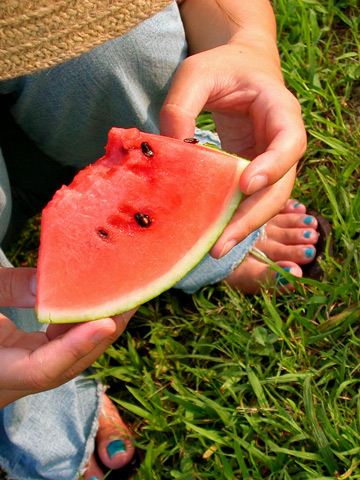 No hot and sunny August weekend afternoon can be complete without a generous slice or two of good watermelon - or so I say. Shall we take this handsome watermelon with us under the sun... 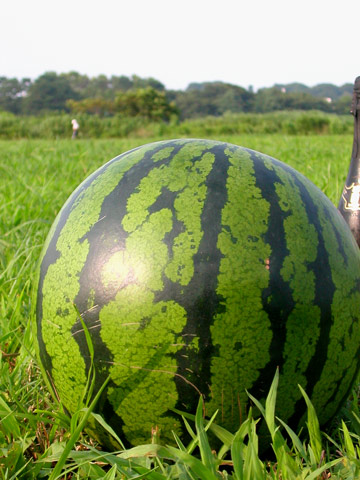 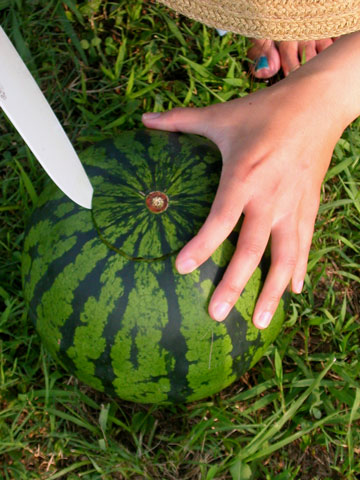 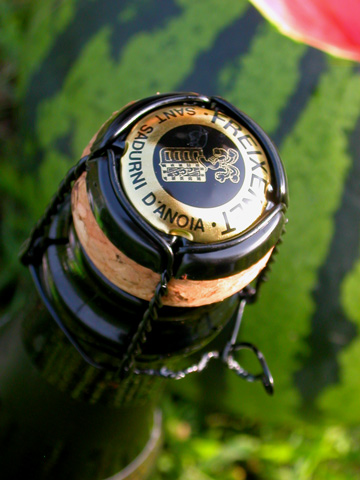 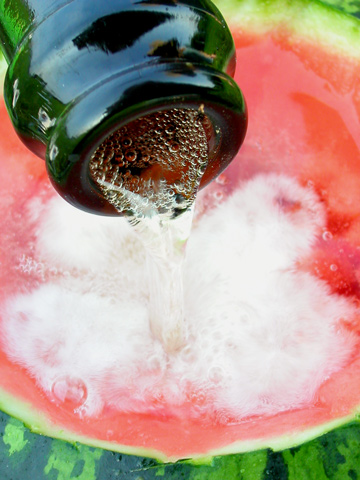 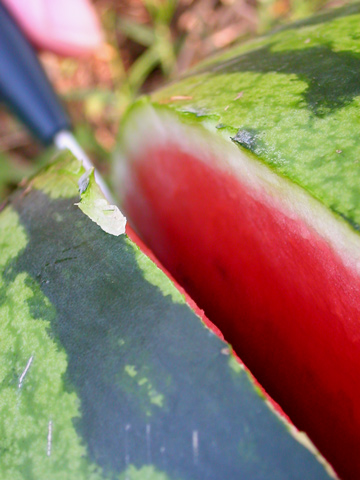 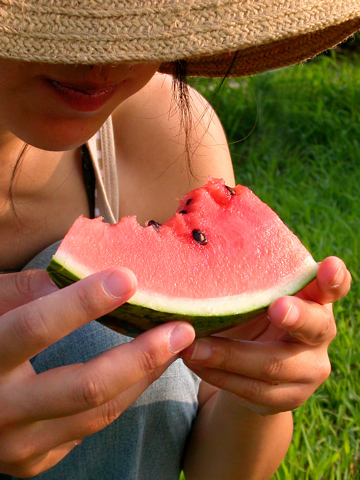 I've done this before: soaking a watermelon with alcohol. Last time (which was last summer) I did it with vodka, and it was fun. But I remembered a tip-off from the very friend who I had heard this vodka-in-watermelon (or should I say watermelon-in-vodka?) method from: you can do it with champagne, as well. Now I love champagne better than any other alchohol including vodka, so I was determined to try it. And I have waited for a whole year, until the watermelon season is nearly over.

One typical afternoon of a hot summer weekend a couple of weeks back, I dashed to the store and got a handsome 10-lb watermelon, and a Freixenet, a Spanish sparkling wine. I know this isn't a champagne, but I went with it because, well, it seemed reasonably good. And I knew it is a safely good bubbly.

Like I did last year, we tried to cut out a top part of the watermelon to pour the wine in, but figured out it wouldn't work, since the flesh of our watermelon was - as is the case with any good watermelon in Japan - pretty solid and dense, and wouldn't absorb the liquid so much. So we ended up cutting slices out of the watermelon and just poured wine over the slices as we ate. It worked good enough, and it was sure delicious. This was such a refreshing treat on a hot summer day. 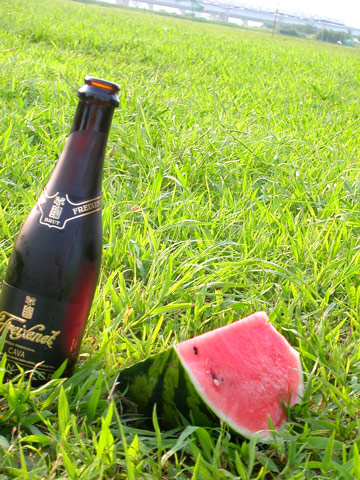 (this last shot is by my sis - thanks Yuka!)

Watermelon aside, I have few things I like about summer, especially the lousy hot-and-super-humid one like we have in Tokyo. And one of the few things I do like definitely is fireworks. Starting in the mid July and through August, fireworks shows are a big thing in Japan, and every weekend there are fireworks somewhere in town. Major ones are really spectacular - tens of thousands of firework pieces would lit up the dark sky for a period of an hour or so.

Last weekend there was one near our place. I was taking a nap in that evening, and the thunderous roar got me up. I got out onto a balcony, and saw it going on. 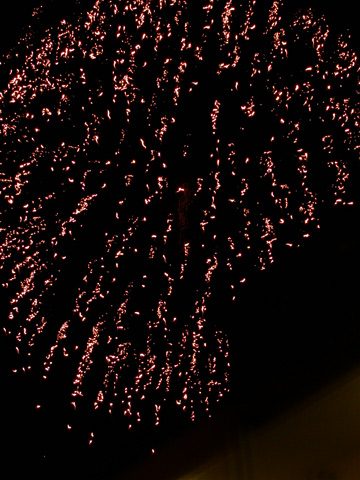 We eventually went outside and watched the fireworks near our place. I tried to capture some of them with my camera, of course - and look what I've got. 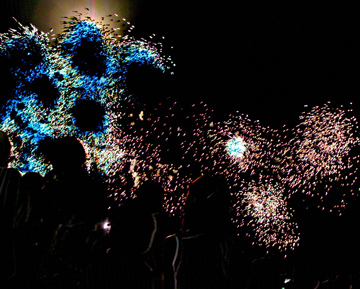 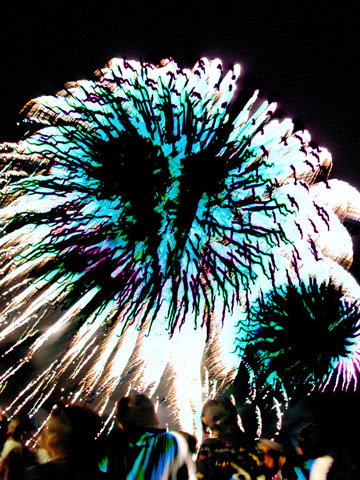 No, these aren't a PhotoShop work. My camera did it. Sigh, my 3-year old crappy Nikon broke last year and I had it fixed, and it got busted again during my last trip to Europe earlier this summer. It still does take pictures, but only close-ups; the color and brightness of a picture get weird when I try to shoot without zooming in. I may call these psychedelic images piece of "art", but I can't help but think now is the time to get a new camera.
posted by chika at: 8/24/2005 11:20:00 AM

Posted by Joe @ Culinary in the Desert

Camera's don't work well on fireworks. Never had watermellon that's been infused with beer. Does the alcohol actually saturate itself through the watermellon?

Sugoi , Chika-san! The watermelon looks positively luscious and it must've been wonderful with the Freixenet. The fireworks still look magnificent regardless of whatever camera you used.

Wonderful pictures! Especially the ones with the straw hat and the turquoise toenails ;) We have soaked watermelons before, using all kinds of alcohol, always a big hit a BBQs. Sadly we had very few chances to prepare something similar this summer - as we've been having constant rain and low temperatures for weeks... Would you kindly send us some of your sunshine???

Hi Chika - lovely pictures! And the fireworks looks wonderful as well with all those blue colours - quite unusual.
I've tried the vodka watermelon once, and although it was fun to eat (drink?), I found it too strong in terms of alcohol content. I imagine that fizzy would be much nicer and mellower indeed and I'll go with this next time.

I said it before and I'll say it again--you have the best site on the www!

I tried many variations on the tea and coffee jellies and enjoyed every last one of them. I had coffee jelly from a Japanese store here but it never occurred to me to make it myself. Duh.

You seem unhappy with your fireworks pictures, but I thought they were beautiful and captured the moment quite well.

Now I know what I can do to use up my vodka. Thanks for the inspiration!
Those fireworks photos do look pretty psychedelic!

nice toenails. though i prefer black myself.

Please write more, we haven't seen a lot of you on this blog recently !!

Loving your site! Can't wait for Summer to come to Australia, I'm dying to try that yogurt-maple-ricotta gelato!

I had a question though that's a bit random. Do you know of some great bakeries in japan that would be awesome to have an internship at? I'm going to graduate from the CIA in August of next year and am thinking about interning at either a bakery or cake place in Japan. Any ideas as to where would be good? My conversational Japanese is "ma-ma." (I can carry 10 year old's level of vocab worth of convo but am iliterate) I would really appreciate a few ideas as to where in Tokyo as I have no idea how to start researching this.

Pretty polish! Matches my car ;-) I would also advise watermelon with baslsamic vinegar and fennel salt, it's delicious.

Your site is just lovely! Thank you for the great ideas and beautiful photos! Best wishes to you!

Oh wow. I love these photos! They just scream summer! And I agree. Watermelon = summer. Esp when you have pip-spitting contests.

Hey I was wondering if you have a recipe for mille feuille japanese style!!

just got intoxed with liters of sangria last night and felt revived again with your refreshing pictures of champs with watermelon. will definitely have to try this at the next Singapore womad!! Happy sunday!

thanks a lot for your comments and I am sorry to have been terrible in blogging and replying to comments. I appreciate your visits and comments nevertheless. I am also glad you guys seemed to like the watermelon tricks and the fireworks photos :)

emi - I am sorry but I have no idea either as to which place might be good for doing an internship, but I guess you might want try out some of the places first, then decide on somewhere whose food you like. Good luck with the rest of your school year and upcoming career.

luvfood - sorry, I am not certain what exactly is the japanese-style mille feuille...

Oooh, it must be a great thirst-quencher. Can't wait for summer in Australia.... :-)

Chicka
Your blog is inspirational!
Your pictures are beautiful and your writing is so lovely and conversational.
everytime I come here to visit,you remind me to enjoy simple and wonderful aspects of life!
thank you!
( your site also motivated me to start my own blog!)

wow, you really have taken great photographes of yummy things.. may i know what camera & type were you using? thx :D

Hey, one things I've used when injecting fruits is this -surgery.

Take a 12 auge needle from the pharmacy, a syringe and surgigcal pasters.

Inject the fruit with the syringe, then surgically tape it over. Leave in the fridge to sit for a day....