My next destination after Paris was Milan, Italy - to be more precise, it was Piacenza, a town located to the south of Milan, where I was met by T, my fellow Japanese blogger and surely one of the most influential Japanese food bloggers. I ended up staying at her place for two nights before going back to Milan to spend one night. Piacenza was a small but pretty town, and I only did a little sightseeing there and instead hanged out with T and her family, enjoying my good company and the great weather (a bit too hot, perhaps).

As is the case with my stay in Paris, I have some of my photos from Italy in flickr to share with you, so go check them out.

A quick look: highlights of my three-day stay in Italy include:

- Piacenza: downtown and its vicinity. Downtown Piacenza is really compact and you won’t need much time to see its major sightseeing spots, but there're pretty small shops and streets, and I had fun just walking around. T and her husband took me to two of their favorite places to eat in their area, and there I had great local treats and one of the best pizzas I had ever had. 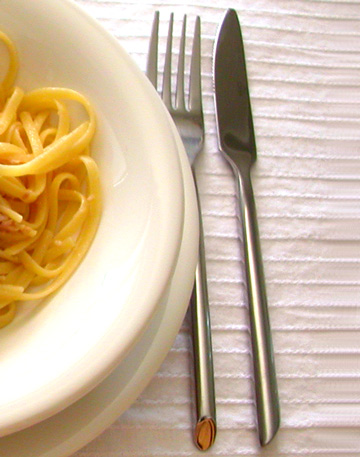 - Homemade dishes and sweets. I couldn't help but look forward to trying T's food, which has always looked great in these beautiful photographs on her blog. She didn't even try to be ostentatious, but instead had me at the plain dining table with the family and served me what they usually eat - simple dishes such as pasta and salad, or slices of cake with a cup of tea. They tasted as good as they'd look in the picture - and believe me, her photography never fails to make you drool.

- Milan. Well, I hadn't particularly been interested in visiting Milan, so I only took one afternoon there. The only thing I did want to see was the famous Duomo, which was under massive renovation to my great disappointment. I suppose there should be a number of attractions in town if I try to look for them, so next time I visit the friend I might do some research on the town beforehand. - Trans-alps flight to London. My flight was nearly cancelled due to sciopero, a notorious Italian strike. It did fly on schedule though, and what I saw aboard was this spectacular sight below me.

Posted by Joe @ Culinary in the Desert

Your pictures are beautiful. Makes me very jealous...Will be checking in more often for some good eye candy.

Wow Italy looks so nice, I want to go there to visit my relatives but I don't have enough money. The pictures you take are just breath taking; I'm definite going to look back here to see what else you have.

wow - what an amazing trip! your pictures are beautiful as well. The cutlery you have there is so cute!

What absolutely beautiful photographs!!!!! And with your eye for detail you miss nothing. From the largest monument to the smallest leaf you are able to enjoy it all.

What a wonderful life you lead!

Hi Chika.
Great photos! Your travelogues give me itchy feet!

I've tagged you for the Childhood Food Memories meme - which is very presumptuous of me - and I suspect you've already been tagged. But, if you haven't, I'd love to read about YOUR childhood food memories, especially after reading about the amazing care package your mum sent from Nagano. Those blackberries looked amazing!

Hi there, thanks for leaving a note, and watch out for my next travelog post for the trip, which should have come at least two months ago *sigh*

Nico - thanks for tapping me for the meme :) I've already got a few such memes to work on, but I haven't been able to get around to them...