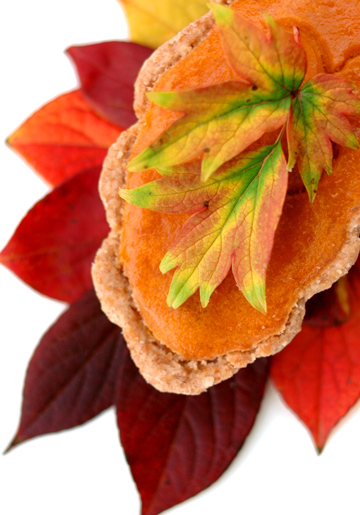 Pumpkin tart(elette) with a little bit of tricks. Tricks will be revealed in an update to follow sometime soon. Although I can't be on your doorstep to do trick-or-treats, and I might be a bit too old for that anyways, I wish everyone a happy Halloween. To those of you that, like myself, don't really do all that Halloween stuff, well, have a wonderful week.

***Updated Nov 12*** Ahem, it's not that the "tricks" were so special I had to keep them unknown forever. It's just my typical sporadic blogging habits. Thanks anyone who still remember this blog.

Okay, pumpkin tarts. It involved slighlty more complicated procedures than needed for what I'd normally make, but it was merely a matter of making tart shells. 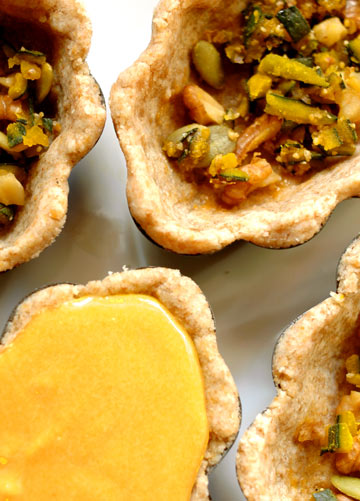 I prepared a tart dough a night before I planned to make the tarts, and on the day I baked the shells, whipped up the filling, filled the tart shells, and re-baked the whole thing, which then went into the fridge to cool.

I used Japanese kabocha pumpkins, which I think are the best of the kind. I love them in both cooking and baking, but when it's used for sweet stuff like pudding or cheesecake, recipes tend to tell you to use the flesh only, which leaves you with the bright green skin unused. But with this recipe, once you've cooked the kabocha, remove skin from the flesh, and chop it up to combine with nuts to fill the bottom of the tart shells. This not only allows to use up the kabocha skin (which I love) but adds a nice crunchy texture to the tarts with creamy and smooth filling. I combined the skin chunks with toasted walnuts, pumpkin seeds, and a bit of spices. 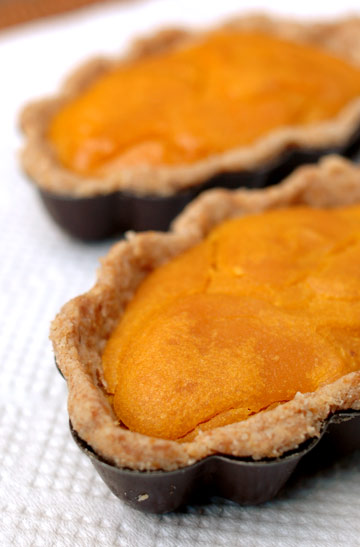 And the little "trick" part; these tartelettes were dairy- and sugar-free. Tart shells and filling, everything. Well, I have to say it was ALMOST sugar-free, as the home-made apricot jam I used to graze the bottom of the shell and the top of the filling did have a bit of white sugar. Otherwise, the tarts were sweetened with maple syrup and honey, and a bit of maple sugar, which is basically the same as maple syrup. The filling gained the cheesecake-like consistency from tofu along with ground almonds, soy milk, corn starch, and - believe ir or not - a tiny spoonful of miso. 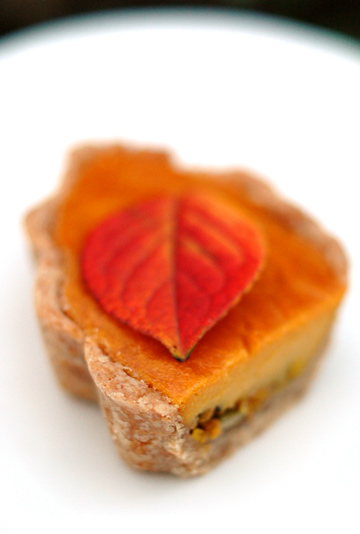 Doesn't sound too appetizing, you might wonder, but the tarts tasted fine - I'd even say they were yummy. They had some aftertaste of tofu at room temperature, but after sitting in the fridge for hours or overnights and completely chilled, there was no trace of tofu or any of soy taste, and the filling tasted really like cheesecake, true to its namesake, as the recipe (in Japanese) calls it Pumpkin Tofu-Cheese Tart. With the tart shells light and crumbly and the filling rich and sweet, the tartelettes were just as good as any pumpkin tarts that I have ever had.
posted by chika at: 10/31/2005 10:27:00 PM

I love this photo with the autumn leaves, Chika. Stunning! What a beautiful little tartlette pan you must have found to make it in that shape.

Chika - your photo is just gorgeous. What beautiful colors! Can't wait to hear about the tricks.

Your photography continues to astound. I am learning every time I come here. I'm going to look at your Japanese blog just in case I've missed some great photos!

Posted by Judith in Umbria

Chica, I am looking to buy a digital camera, and I just don't want to look at any other cameras - I'm dying to know which camera you use. You've spoiled me for any other camera. Hoping you won't mind sharing which make/model you use. Crossing my fingers!! :) Thank you!

I went to the Botanical Gardens this past weekend, and loved that little leaf so much, I wrote down the name! Acer Japonicum Aconitifolium, or, Fernleaf Maple. I LOVE it. So beautiful!

nice photo and nice blog. thanks

Hi, thanks for kind words! I was myself quite happy with the tarts as well as the photos of them with pretty autumn leaves :)

nauga - I'm now a 2+ month user of Nikon D70, but before that - and therefore for vast majority of my photos in the archives of this blog - I used Nikon CoolPix2500. It was basically a crappy little old camera but it did great jobs.

beautiful photos. the food looks amazing. i'll definitely be back to visit.

BEAUUUUUUUUUTIFUL pictures!! That tart looks so yummy too!

Hi,
Your site is so beautiful! Is there any way you could post or e-mail me the recipe for this in english? I cannot read the Japanese, and I am dying to try it after reading about it and seeing the lovely pictures on your site.
Thank you!

a technical question: what digital camera are you using to take the closeups of your recipes?

Chika-san,
Like Molly I would love to have this recipe in English. My goal for 2006 is to learn Japanese but I fear that it will be a l-o-n-g time before I'm capable of translating this for myself!
Congratulations on the website - your efforts are appreciated!
cheers,
annie

your tart looks ABSOLUTELY beautiful and delicious. I am so impressed. Subarashii!