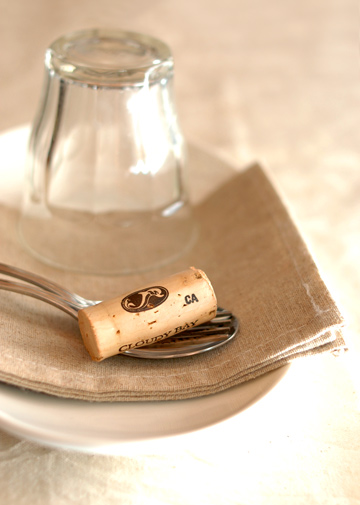 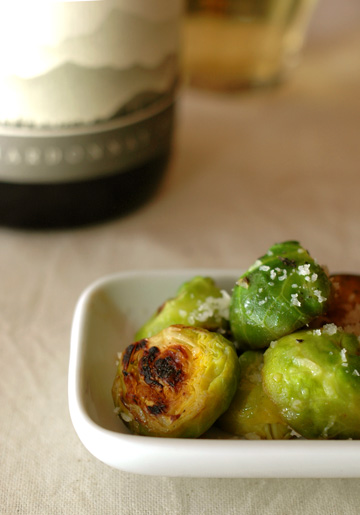 Seared brussels sprouts with thyme and manchego cheese to start with; 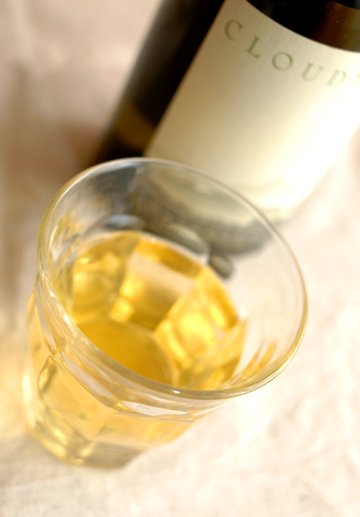 Alongside a Cloudy Bay 2001 Chardonnay; 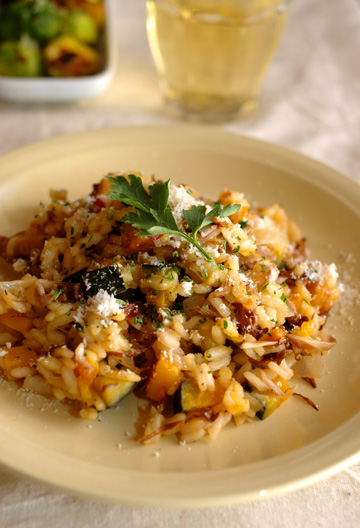 Followed by Risotto with roasted kabocha squash and radicchio; 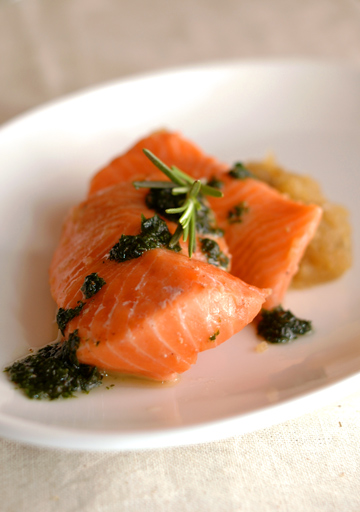 Slow-cooked salmon with apple-rosemary puree and herb oil; and 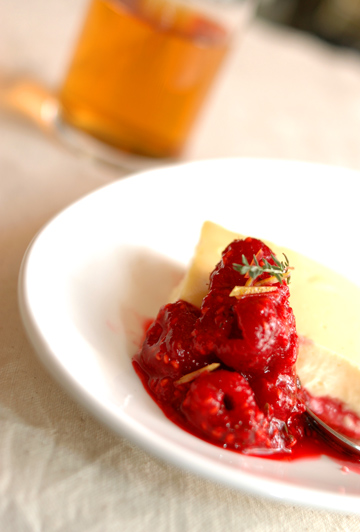 It took me quite a while to cook all these up in one day, but it made an extremely fulfilling dinner for sure. Pressed with work, I hadn't been able to cook a proper meal lately, and I had had an itch for cooking, especially when I had just gotten a new cookbook, which soon became a new favorite of mine.

Now, if you ever try to make a recipe from a chef cookbook - or any cookbook, in fact -, you'd most likely be doing more or less this kind of "adjustments" by yourself, replacing some ingredients you can't find or shortcutting some procedures that you have decided not to undertake. In this book, Melissa Clark has done it for you in a professional manner, so that you wouldn't have to get lost or end up putting a wrong focus while missing out critical parts with a sophisticated recipe.

That's one benefit of the book, true. But what meant more to me when I flipped through a copy of it at a bookstore while in Honolulu last month (this is something that's usually hard for me to do when I live in Japan) was the selection of dishes itself; just about every recipe in the book appealed to me, (even if I haven't been to any of the restaurants mentioned in the book!) from Fois Gras Terrine with Asian Pear Marmalade to White Gazpacho with Crab, Green Grapes, and Almonds to Arugula-Mint Salad with Apricots and Cumin to Mushroom Risotto with Truffle Tea Foam to Roasted Pork Chops with Peaches and Basil to Fresh Fig Tart with Parmesan Ice Cream. I didn't need much time to decide to get a copy, but I did when choosing what to cook first out of the book back home.

Since I couldn't decide on one single recipe, I went with several at one time, trying to make a sort of a set menu, which you have just seen in the pictures above. The brussels sprout dish is originally by Andy Nusser of Casa Mono, risotto by Suzanne Goin of Lucques, salmon by David Bouley of Danube, and cheese cake by Claudia Fleming formerly of Gramercy Tavern, for the record.

I, however, ended up tweaking some parts of the recipes, anyways. For the risotto, I left the kabocha skin on since I like it too, and added some shallots to onions because, well, I had some at home. For the salmon, which was briefly cooked at a ultra-low temperature to create silky texture, I used sashimi salmon just to secure freshness, and used flat-leaf parsley in place of chive for the oil. I also didn't use a blender to mix the herb and oil because I don't own one, and simply finely chopped the herb to mix into the oil, while omitting the garnishing horseradish altogether. With the raspberry compote for the cheesecake, I added a bit of grated zest of lemon to complement thyme, since I didn't find - or have never found - lemon thyme in Tokyo.

Despite all these changes, everything turned out delightfully good, I'm pleased to say. We all found the salmon especially good, even if I seem to have a bit overcooked the fillets; the texture of flesh was absolutely mellow and the sweet apple puree combined with aromatic browned butter and soothing rosemary was divine. We also liked the subtly goat-cheesy, light-textured but rich cheesecake a lot, although I personally preferred the cake chilled rather than at room temperature as suggested in the recipe. 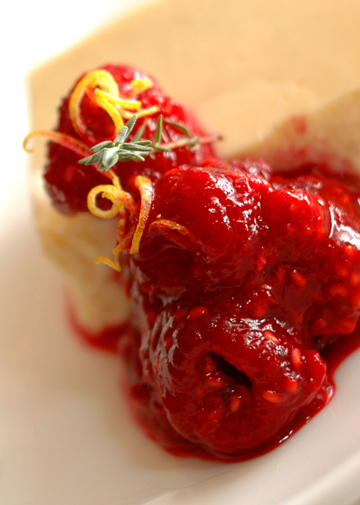 All in all, I was happy with everything I had cooked this time, and with cooking I had finally done for the first time in the past few weeks. It's good to be back in the kitchen after a while, even if it's only for a limited period of time. I have gained a renewed awareness that I love process of making food as much as I love eating it, and that I am so lucky to have family and folks who happily share what I have made with me. Honestly.
posted by chika at: 2/14/2006 01:25:00 AM

konnichiwa chika! just found your blog and i have to say you are great!! watashi wa suki desu chika's photo!! thats how far i have gone with my japanese so far, hope to improve soon! :)) keep doing the great job!

what a stunning meal. Your salmon looks amazingly devine. I haven't had it slow cooked before, but have heard many comments on the resulting soft texture prodcued with this method.

You images here are breath taking!

Your pictures are beautiful, they make me want to eat everything you have made!

I checked this book out of the library and really liked a lot of the recipes when I first paged through it. I want to try the Curried Sweet Corn and Coconut Soup, Handkerchief Pasta & Asparagus Flan! I think this is a book I want to own :)

Im not one for brussel sprouts but those look gorgeous. YOur guests are a real fortunate bunch!

I'm proud of how great a writer and cook you've become, Chika-sama. Hope all is well.

Where do you find brussel sprouts in Tokyo? I don't think I've ever seen them. A lot of the items you use in your food are also pretty pricey normally here. Are you purchasing at a wholesaler or a discount place like Yamaya or something? I love brussel sprouts, and have seen some wonderful recipies for them lately, but have never seen them here.

Wow! That looks like an amazing meal! Each dish was more enticing than the next. Yum!

Hi Chika, that's a very impressive feast! I've been contemplating buying this book for a while since I've really enjoyed Melissa Clark's other cookbooks. However I was worried that the book's recipes might be oversimplified and lose too much of the chef's original work. But everything you've cooked looked splendid - and now I can't wait to start cooking from it!

Your photography is absolutely inspirational. I must own this book. I must cook from this book. and I must seek lessons in digital photography.

Thank you for sharing your experience. I too find that I love the process of preparing food as much if not more than I enjoy eating it. And it's that much more special when shared with loved ones.

Hi, thanks everyone for all of the comments and kind words...

Scott - thanks, that means a lot when it comes from a great writer like yourself! (well, I'm not sure about the "cook" part in your case as I've never tried a food you cooked...)

travis - depending on what part of Tokyo you live in, brussels sprouts are more commonly seen in this couple of years or so. In my case for example, several of my local supermarkets had ones. Not everything was available at regular stores though; I did have to go to specialty food stores for some ingredients. I like Yamayas, but haven't been to one lately... there I would usually get wines and pastas :)

Clement - I think I know what you mean :) I haven't tried "original" recipes from the chefs appearing in this book and thus can't tell if they may be oversimplified, but things I've tried didn't disappointed me. And for serious involved cooks like yourself, this book can make a good one-stop introduction to recipes by different great chefs, so if you try and like a recipe from one chef, you could go further and check out their originals.