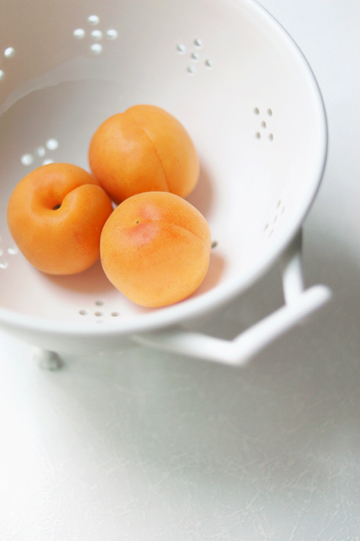 As I write this, I bite into a chilled, large, almost overripe nectarine I bought rather cheap a few days back. There a couple more sitting around in the fridge, along with perfectly ripe, beautiful white peaches, although I'm out of plums at the moment. What more can I ask for? Oh, maybe yellow peaches, when they become a little less expensive towards the end of August. As much as I hate summer (did I ever mention it?), I love summer fruits - especially those stone fruits.

And yet, there is something I have never particularly cared for among my beloved stone fruit family: apricot. Admittedly pretty to the eyes and to the camera, these small, plump, ever so rightly 'apricot-colored' fruits are found ubiquitously in bakery goods and jams year around, but I never liked any of them really, nor have I ever sought after them fresh druing a very, very short period of time in the early summer when they are around. In fact, they're one of the few fruits that I, a huge fruit-eater, positively avoid (another being persimmons) when I can - I can eat them, but wouldn't if there is another choice. Well, it has never bothered me as they don't find their way in too many dishes I cook or eat every day, and let's face it, apricots would come and go before I even notice.

That said, this year I did seek for some fresh apricots, and did buy a basketful, even if I wasn't exactly sure what to do with them. I was prompted to do so for a change, maybe, but it was largely due to the post and photos that a friend of mine in California put on her blog back in June - it literally drove me to go out and get some apricots. The blog's in Japanese, but you'll know exactly what I mean if you just look at her photo of apricots - looking stunning, it simply got me into believing that they must be something really good.

So, my long rambling aside, apricots. As someone who had never bought fresh apricots, I had little idea as to what to do with them (I did eat one, only to re-realize it wasn't my favorite fruit, after all). As I consulted my cookbooks for help, I was rather amazed by actually how many apricot recipes I had - I must have overlooked them without paying any attention. So, here are the things that I eventually made with those unlucky (or lucky?) apricots that were bought by someone who fails to fully appreciate the gold of the early summer... 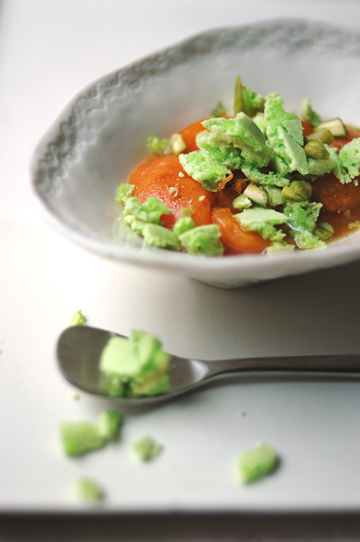 Quick Apricot Crumble with Pistachio Macarons (Crumble minute abricots-macarons a la pistache), from a cookbook that I bought a few years back in Paris called Picnic (Isabelle Brancq, Marabout 2005). Crumbles are one of the easiest pastries to make, but in this fool-proof recipe, it comes even easier as you only 'crumble' pistachio macarons (not to be confused with macaroons which are made with shredded coconuts - in case you are not familiar with this France's favorite treat, refer to this) over pan-sauteed apricots. Simple as it is, this was a dish to enjoy the enhanced flavor of tangy and sweet apricots - which to me was a little too much ('I knew I never liked apricots,' I muttered for the second time).

Well, that's that - other things looked more promising, and so they turned out to be, to my great relief: 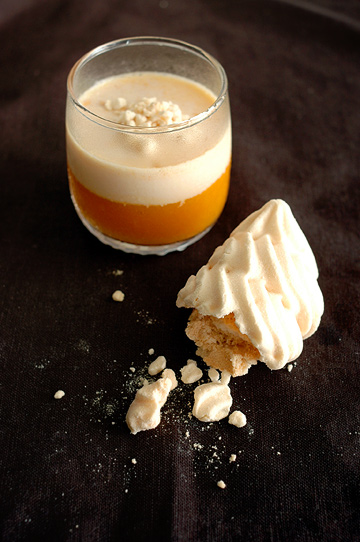 Found in book Delices de lait (Laurence Laurendon & Gilles Laurendon, Marabout 2003), this glass of pureed fresh apricots and mangoes topped with milk blender-mixed with broken meringues, called Fresh Fruit Cocktail with Meringue Milk (Cocktail de fruits frais au lait meringue) was rather a bliss. You might suspect that I liked it because it has mangoes mixed in it and I wouldn't argue, but the combination with the thick fruit puree with full of flavor and formy sweet milk I found was as great a match as it was a surprise (it had never occured to me to throw meringues and milk together into a blender!). The only problem was that the two preparations got mixed up as soon as I poured the milk into the glass half-filled with the apricot-mango puree. So I gave it a second try in which I popeed the glass with the bottom layer into the freezer for a bit before doing the top layer; this way, a thin layer formed on the surface of the fruit puree prevented it from blending with the milk mixture, producing a neatly layered drink.

Another nice and refreshing glass: 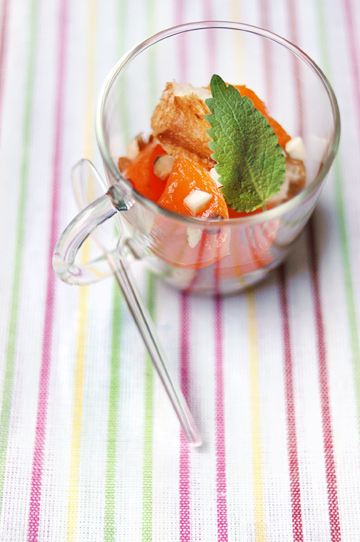 Apricot, Almond and Brioche Salad (Salade abricots-amandes-brioche) from the same book Picnic mentioned above. Here apricots are steeped in chilled lemon verbena tea and served added with toasted brioche and almond chuncks just before eating - simple but yummy, only if you eat it straight away once the brioche pieces are added to the tea and apricots or they get soggy (as a matter of fact, you shouldn't be taking pictures, honestly). I didn't get to find fresh lemon verbena, and although the recipe says you could substitute dry one for fresh, I ended up making the infusion with fresh lemon balm - may not have been as lemony as it would with lemon verbena, but light and refreshing nonetheless.

Now anything but light and refreshing: 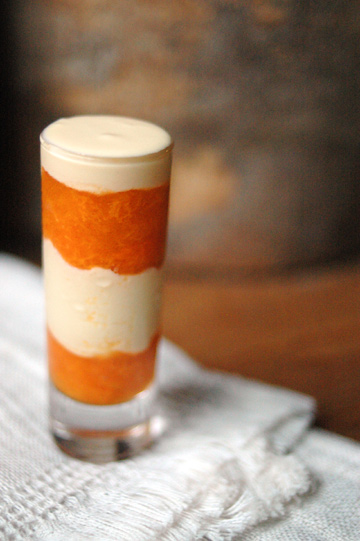 Apricot and Caramel Cream Cup (Coupe d'abricots et creme au caramel) was a truly flavorful, rich (maybe a tad bit too much so), and sweeeet treat that layered apricot compote (which I whipped up using the microwave) and a mixture of creme anglaise, caramel and heavy cream. For this caramel cream, I pretty much followed the recipe, which is found in the book Du caramel plein la bouche (Trish Deseine, Marabout 2005), and was stunned by how outrageously sweet it came out - so much so I even added some extra heavy cream in a desparete attempt to 'thin' it down - sweetnesswise, not caloriewise, of course. I couldn't believe I had made something that sweet myself, although it was even more unbelievable that the cream, as it turned out, was actually tasting good when combined with the tangy apricot compote that I had made. Pretty darn scary to think how such a sweet-and-tangy balance is based upon, in those luscious dessets loaded with sweeteners you get from patisseries in town.

By this time I had successfully used up all the apricots I'd got, all happily consumed basically, and this was exactly when it happened: 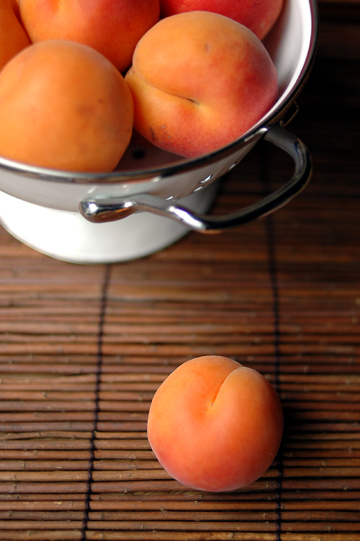 Why, more apricots came! I received a small box of apricots, not so perfectly looking but super-fresh being just off from the tree, from Nagano, the biggest apricot producer of the country. Not that it happens every summer, it was actually the first time that my mom sent me apricots... without even realizing that I rather dislike apricots... oh well. This must have been a year of apricot for me, I figured. So my honeymoon with apricots lingered a little further.... 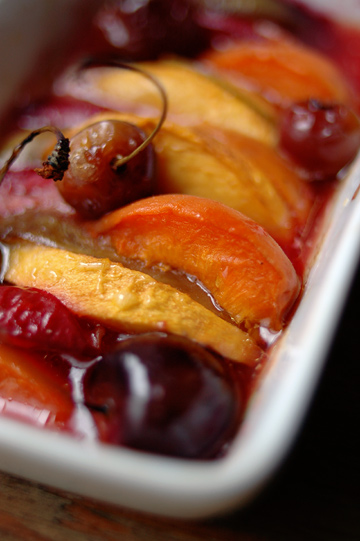 Here's my confession: I have a habit of roasting whatever fresh fruits. Even if I believe that most fruits taste best fresh, I just can't help it... ever since I encountered with that beautiful salad of fruits roasted with salted butter, which I have been making countless times for the past three years, using a various mix of fruits of the season. Based on the same recipe from the book Mes petits plats preferes (Trish Deseine, Marabout 2003) - although it's more of an idea (briliant one) than a recipe -, this time I got peaches (white and yellow), figs, cherries (bing, Rainier, and Japanese Sato-nishiki), and plums... and oh yes, apricots (too excited with the bunch of the fruits, I almost forgot that I'd got them to make fruit salad, for the purpoes of using up the apricots!... phew...). The salad was as delisious as ever, and I believe it was a good use of apricots.

One last thing before you got bored of (looking at) apricots: 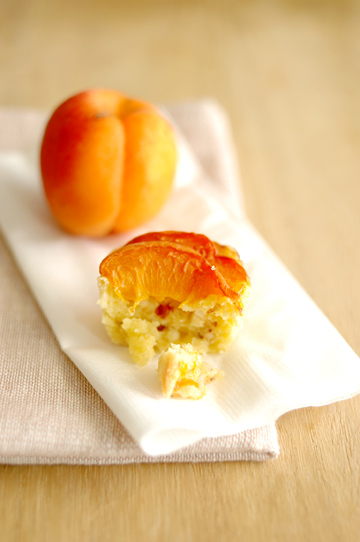 Apricot and Hazelnut Cakes (Cake abricots-noisettes), a yet another lazy-cook-friendly recipe from the book Picnic. It's a pretty straightforward recipe of cake that has chopped fresh apricots in the batter and is baked topped with chopped hazelnuts, except only I did it the other way around (mixed the hazelnuts in the batter and topped it with the apricots). Easy and yummy, and I'm sure the cake would be good with just about any other fresh fruit.

These were all made in the late June and early July, and apricots are now nowhere to be seen in the fruit shops, completely taken over by other stone fruits such as peaches and plums. Not that I'm THAT missing them, yet I am happy to have tried something I never positively liked, and quietly surprised by the fact that I have indeed some more apricot recipes I didn't get to try this year but would like to; overwhelmed by the number of recipes I had found, I decided to focus on recipes from French cookbooks only. So maybe next year, ones from my other sources will be on their way - and there are a number of them. A popular fruit it must be, I reckon.
posted by chika at: 8/05/2007 05:22:00 AM

What gorgeous desserts! I didn't make nearly as many apricot desserts as I would have liked this summer, so this post is such a lovely vicarious experience.

And roasted fruit salads sound delicious -- like crisps or cobblers pared down to their essence. I'm going to try that.

Stunning pictures and so many nice ways to use apricots. Here they are still in full season so might try some of these soon.

ne, chika-san! those apricots and apricot desserts look so beautiful!

Amazing photographs. It really makes you wish you could sit down and enjoy these treats.

Everything looks so yummy! So far, we haven't tasted good apricot this year, I don't know why. Other stone fruits are very good due to the cold winter in California (they wiped citrus crops though...) Anyway, your pictures made me feel like we should give another chance to apricot! Gotta hurry to the store!

Hello all, thanks a lot for your comments! Hope you'll enjoy apricots more than I did :P

ooishigal - nay, my French is only good enough to get me figure out recipes, with a help of dictionaries! but thanks though.

What a treasure trove of apricot usage. I have the same feelings about apricots as you do (did?), so these recipes may help me see more of a point the them.