rice can bubble, too

Just as not every French likes wine (or do they?), not all Japanese like Japanese "rice wine" or sake. At least I don't. It's customary in Japan to have a bit of sake as a part of New Year's celebration (often children as well), which would always be one of a few things that spoiled my otherwise fun New Year's break as a kid. I can quite happily spend the rest of my life without its help (not even in cooking, in which case I just use white wine).

Then, recently I read somewhere that they now have "sparkling sake" as an up and coming item especially among young women (yes, like myself!) who usually steer clear of sake; now produced and sold by an increaseing number of sake brewaries, sparkling sake is fast finding its way in restaurant and household tables, the article read... hm, not my home, I thought, not yet. 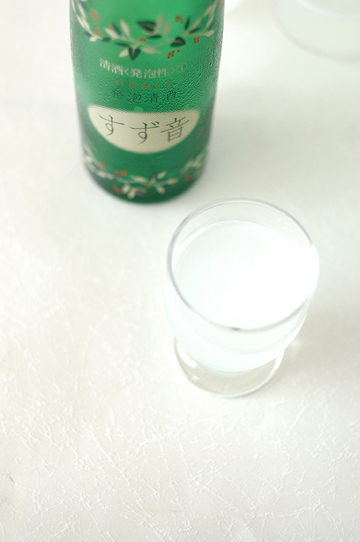 So I grabbed a couple of bottles of different brands a few days later, and just opened one this evening... and I must say I quite enjoyed it, even if it still had that distinctive smell of sake which put me off when I opened the bottle. Definitely sweeter, lighter and fruitier than regular sake, it was quite refreshing and almost too easy to drink... it went down quite quickly among three of us.

Not quite like champagne as the manufacturers advertise, and would perhaps be a bit too sweet to be served along with a meal to my taste, but some other brands are supposed to be drier, so I should try them one of these days while watching if they make it to become a staple at liquor shops and restaurants, or just flat out after a while like so many other things in Japan that come and go in a matter of months, if not weeks. At least, flatly speaking, it tasted way better than a Japanese sparkling wine (which is rare) I tried the other day, which was basically best forgotten. Can't possibly beat champagnes, but at least we can make something decent that bubbles other than beers....
posted by chika at: 9/30/2007 11:56:00 PM

sparkling sake...sounds interesting ! Wish you had used a light pastel coloured paper for background. It would've brought out the sake.

there's a small izakaya in Ginza which serves that. very nice but unfortunately, because of the second fermentation to get it fizzy, it's also very unstable and goes off quite quickly.

I'm with you on the sake -- just not to my taste. But, sparkling sake sounds interesting. From what I hear, the French can't keep up with the demand for champagne anyway so we'll all be looking for bubbly alternatives.

Tips for Makeup and Beauty said...

I'm starting to see these offered at various Japanese restaurants here in the San Francisco Bay Area. Too tempting for me to order something else, but I will try and order one next time I see it. Thanks for the description; I wonder if it would go well with Indian food, since they always suggest a sweeter wine to pair with it...