a beautiful month of the mountains 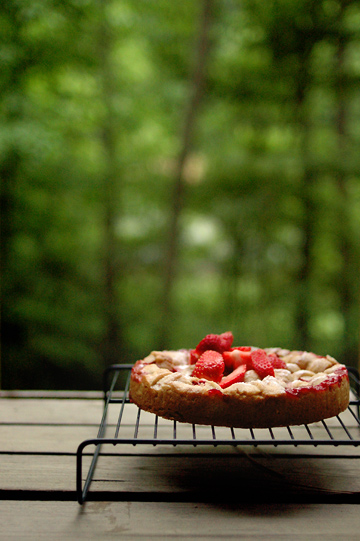 a few of my favorites during my stay up in the mountainous Nagano for the month of May, after the fun camping out: 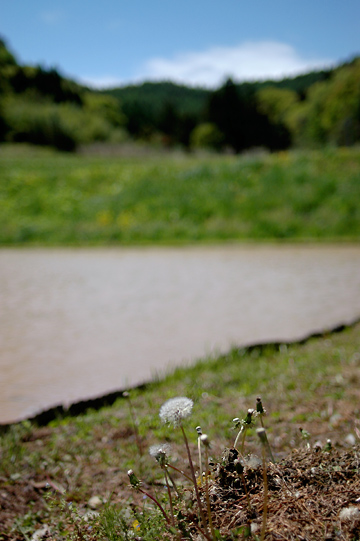 A patch of rice field, filled with water getting ready for planting Layers and layers of pale yellowish green leaves, just for a short while before turning all into darker green 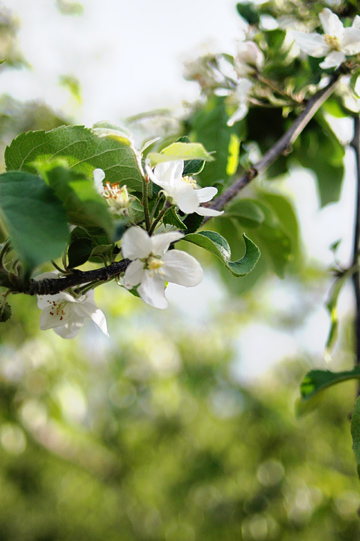 Apple blossoms, among hundreds of other flowers - those are on trees of edible apples, for which Nagano is one of nations' biggest producers 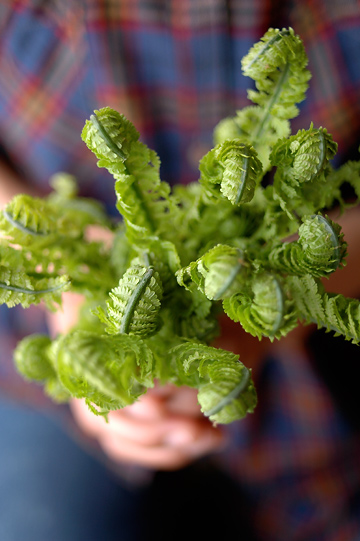 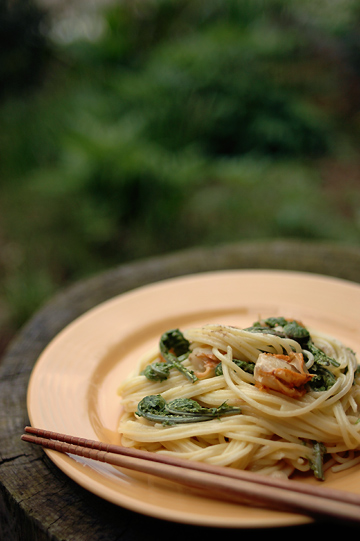 Pasta with kogomi and baby scallops; butter-sauteed scallops and blanched vegetable together with heavy cream make a quick but flavorful fare Sansai ten-don or a rice bowl with mountain vegetable tempura; topped with tempura of tender mountain vegetable shoots, this seasonal delicacy must be the most exquisite ten-don you could ever have - much, much better than a more common, so-called premium-grade ten-don that would typically have large shrimp tempuras on top. Rice field, right after the seedlings were planted 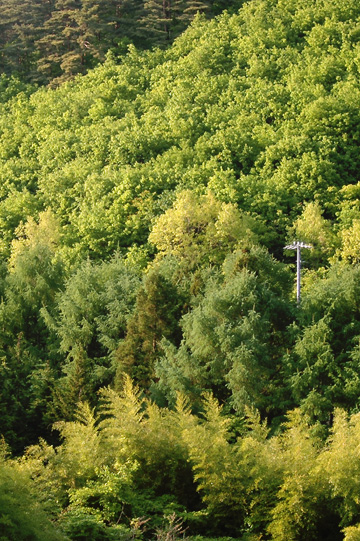 Mountain trees, still in layers of nuanced green, which however is definitely a notch bolder than a week before 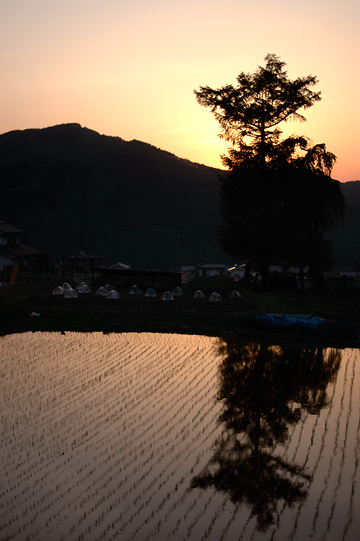 Green trees, mountains and rice fields - but all in pink 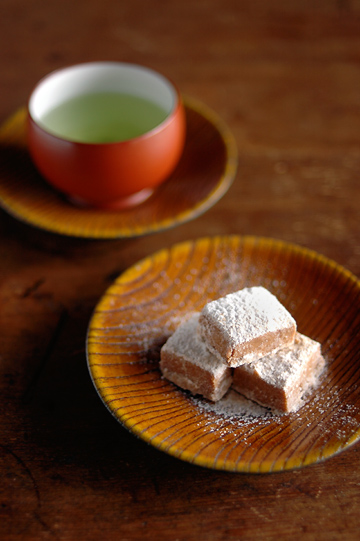 Another seasonal green - first-flash green tea, accompanied by kinako (ground roasted soybeans) "snowball" cookies that I made (I know they aren't snowballs, but I tried to reproduce my favorite shop's kinako cookies, which come in bricks like these!) A folk that has the green of trees reflected on it; and oh yes, the cheesecake as well! (I'm hoping to do another post for this and several other cheesecakes I made last months...) Orange-nut chocolate mousse cake, made proudly by my cousin who once was a professional baker and still makes us some occasionally.. yum! 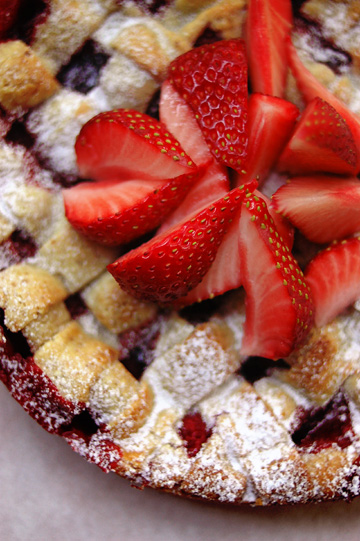 Berry Linzer Torte (recipe here); Linzer Torte was one of the two all-time favorites of my mother, among a countless good and not-so-good sweets I'd make for my families as a teenager, and I thought to give this fresh-berry version a try for my mom's birthday at the end of May. Some changes to the recipe I made here and there (using strawberries only, replacing hazelnuts with half almonds and half walnuts, etc.) aside, the lattice top didn't turn out very well, and the tart got quickly soggy before we were able to eat it - not a greatest birthday cake you can make for your mother's big day, but as they say it's the thought that counts, right? 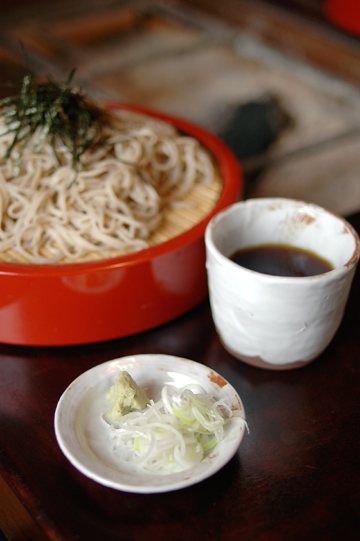 A soba lunch; soba, or buckwheat noodle dishes, can be had throughout the nation, but are one of Nagano's specialties. My mom took me to an old, small soba restaurant that's attached to an old inn, and just being there gave us a feeling as if we had been back in '50s or so (I wasn't born then, but you get the picture). 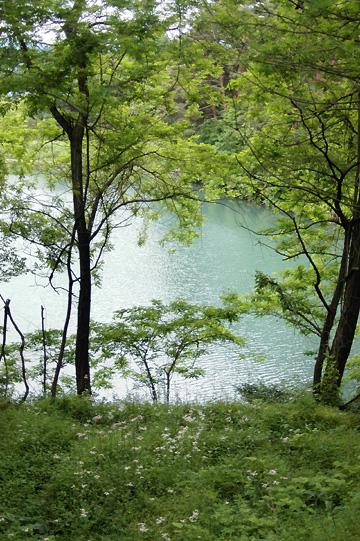 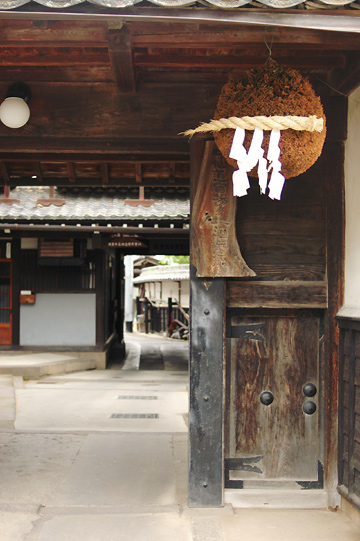 A sake brewery; Nagano may not be Japan's leading sake producing areas, but with the plentiful pure mountain water available and the large amount of rice production, they apparently have quite a few good ones on offer (well I don't drink sake myself and thus can't tell good ones from the mediocre, but I've been told so) 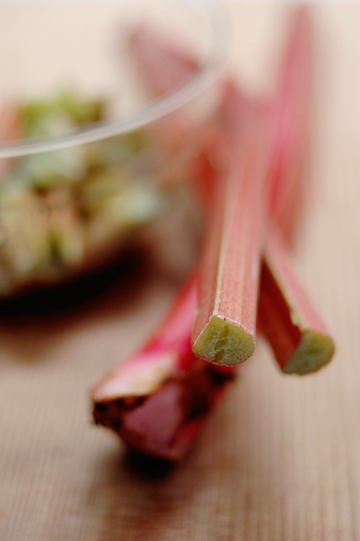 Rhubarb!; they are something that catches my eye whenever I find them on the store shelves, especially when I'm abroad - they are fairly expensive in Japan, or at least in Tokyo. Nagano produces rhubarb from a long time ago, yet this was my first time actually seeing them in store. What a pleasure of being able to afford a large bunch without being worried by their price tag.

My mom and I got a two large bunches, my mom for making jam, and me for some sweet treats to myself - crumble to begin with. I've been more or less using a Delia Smith recipe for the crumble dough (recipe here), but this time replaced half the flour with buckwheat flour; like I mentioned, buckwheat is a big produce of Nagano, and so is rhubarb (compared to other regions in Japan, anyway), so pairing them seemed to be quite reasonable to me. Besides, buckwheat and rhubarb, as it turned, belong to the same plant family (polygonaceous), which should make this combination of local specialities even more natural. Served with some fresh strawberry chunks lightly tossed with sugar and drops of rose water, the crumble made a casual but superb breakfast. 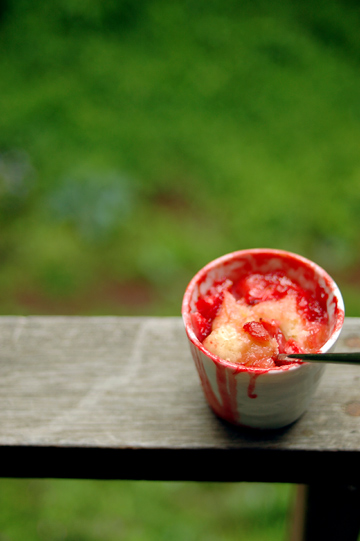 Another thing made from our rhubarb - rhubarb strawberry pudding cake (recipe here). Aptly named "pudding cake", the cake was a dense, steam-cake like, well compensated by the light and sour rhubarb-strawberry mix, although I personally found it on a bit too chewy side. 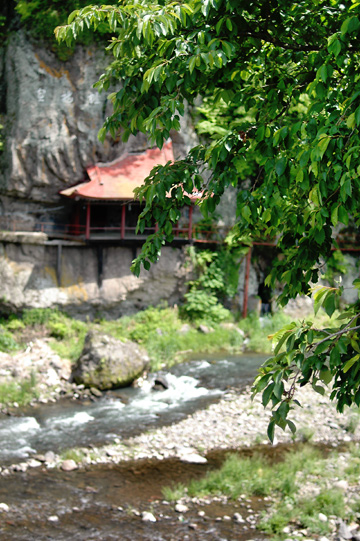 And it was right before the day I was to leave Nagano, after a month-and-half stay up in the mountain, getting lots of fresh mountain air and spectacular views, doing a lot of cooking, baking and eating using local ingredients in season, and spending some time with my mom. There are quite a few small farm-fresh green markets alongside major roads, and it is always fun to pop in and have a peek. We dropped by one on my way to the train station, as I was after a super-fresh asparagus bunch to take with me back to Tokyo. Tragically, asparagus was all gone for the day, yet we found some pretty plants in addition to a blueberry tree; I trusted it to my mom, hoping to have ripe, plump berries next time I'm back. 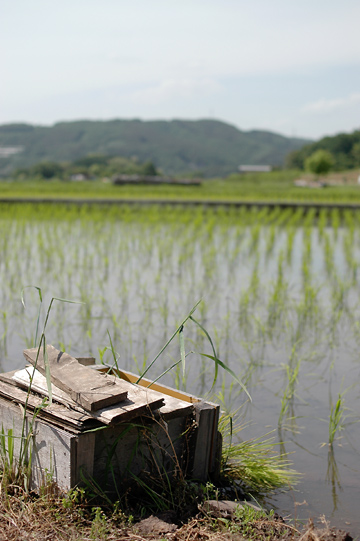 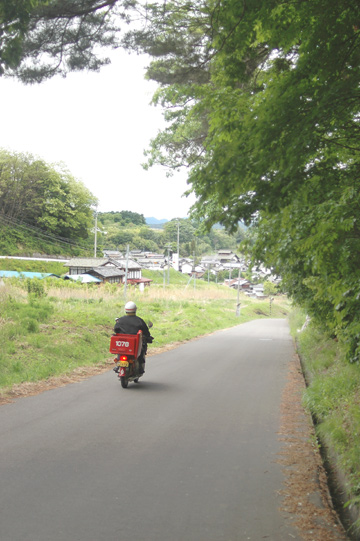 So I said good-byes and thank-yous to my mom and the glorious mountain nature that gave me such a fun- and fresh air-filled month and a half - I will come back, yes, soon.

During that month and half, I've shot thousands of photos of the mountains, flowers and food, as I often would. I couldn't quite have them all make it to here, but I've managed to put together a set of selected shots that I hope will give you a sense and air of the mountain life from spring to early summer, here. 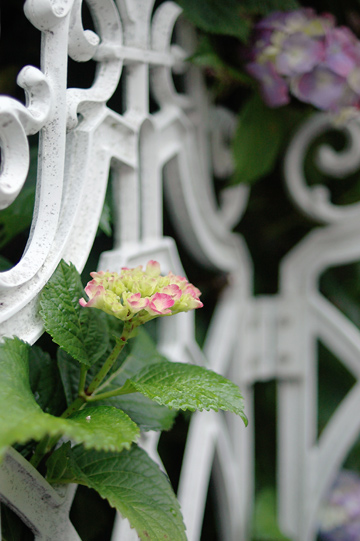 So the good-byes to Nagano meant hellos to Tokyo, which were quickly followed by hurried good-byes as I rushed around and packed, however. 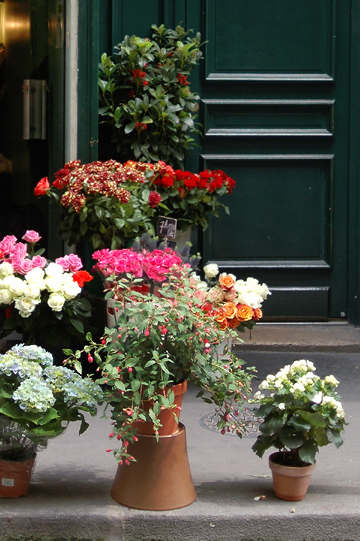 Then again, good-byes always come with new hellos... to and from old friends and favorites. And new ones to come, hopefully. 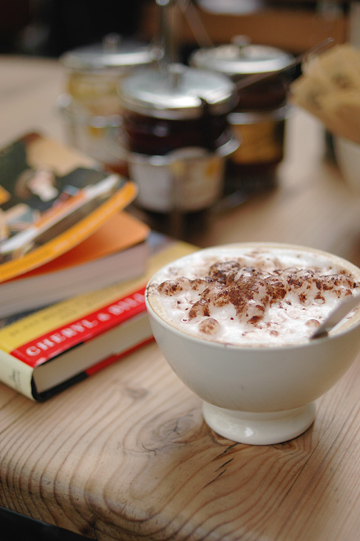 So here I say good-bye to the month of May and hello to June, in hope of spending a yet another wonderful month not in the mountains hundreds of miles away from Tokyo, but in busier, yet equally charming cities thousands of miles away from Japan.
posted by chika at: 6/07/2008 05:00:00 AM

looks very nice! where is this in nagano?!

An intoxicating post! Especially love the Sansai ten-don and the soba! I'm heading to Tokyo on Friday for a week's holiday and you have me all aquiver about the wonderful food I'm about to eat!

Could you please post your recipe for those yummy looking kinako snowballs?
Thank you!!

Your photos are always great!

If you don't mind me asking, what camera do you use?

And about the soba, how is it eaten? With those garnishes?

I love all your photos, but that first picture especially, conveys such longing. Beautiful!

I have a coworker just transfered to USA. He's from Nagano. He was very humble about introduce his place to me, possible of language difficulty. But from what you posted here... it's a beautiful place! All those cooking of yours, looks really delicious.

How much does your cousin want for the Orange-nut chocolate mousse cake recipe? ...drooling...

Your pictures are absolutely beautiful. I want to see more posts!

As always, your photos are absolutely lovely. Thank you for posting them!

I just nominated your blog for an award on my blog today :). Check out the entry for Monday, June 30th if you'd like to see it :D.

Your pictures look so tasty and fresh. Please let me know how to take pictures like you !

You're photographs are elegant and cause a sort of reminiscing, even about a place I've never been before.

hello there... thank you all for your comments and apologies for my belated replies.

Stephanie - hope you had a great time there!

someone - the recipe of kinako snowballs, it is posted on a Japanese cooking website (http://cookpad.com/mykitchen/recipe/452449/), and I cannot copy the original/translation here, sorry. It's basically a snowball recipe using vegetable oil instead of butter, and replacing part (15-20% or so) of plain flour with kinako powder (ground roasted soy beans).

Blackwidow - oh he should be proud of where he's from!

littlem - could be expensive ... lol. it indeed was drooling good.

someone - I know I know, it's hard to find them!


Thank you again for all for your kind words! xx

Could you please post the URL directly linked to the Kinako recipe? I have a hard time finding
it on the Japanese cooking website
which you indicated.

thank you for posting the URL to the kinako snowballs recipe!
I like how you made the cookies into bricks or squares instead of the original snowball shape. what is your method in making them into bricks? please share with me. also the recipe calls for vanilla oil, is it possible to substitute it with vanilla extract? lastly, in addition to the 30g of kinako powder listed on the recipe, you also added 15-20% of it in replacing some of the plain flour?

Beautiful, it's a pleasure to find a pretty japanese blog in English! Congratulations!