every day can be a soup day 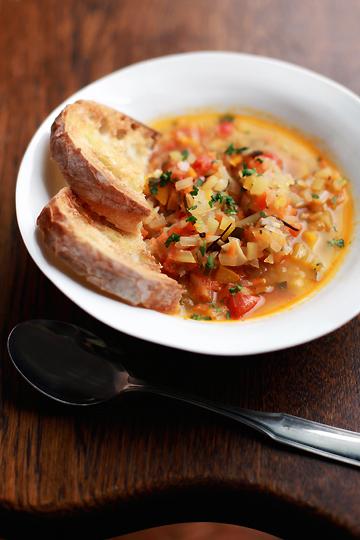 Nabe, or hot pots, may be a regular player on the dinner table during the cold winter months in Japan, but we do a lot of soups, too - often hearty, filling sort with a lot of good things crammed in. Other than being hearty and warming, there is something really comforting about soups - but perhaps you don't need me to tell you this.


Here are a few soups that I've been eating for the past week or two. All full of vegetables - in fact, only vegetables.

This unassuming, rather plain-looking bowl is kenchin-jiru, a miso-based soup that is believed to have been first created by monks of Kencho-ji temple, from which the name "kenchin" comes from ("jiru", meanwhile, means "soup"). When I was growing up, we didn't eat miso soup as often as a lot of other Japanese families may have been, but when we did, it would often end up being ton-jiru, a miso-based soup with pork fillets and vegetables. Filled with lots of large pieces of vegetable (often root veggies) and thin pork strips, the very chunky ton-jiru is a nutritious dish that can make a complete meal on its own - well, with a bowl of rice. That I think was certainly handy for our family with hungry kids and busy parents.


And I see kenchin-jiru as a meat-less version of ton-jiru, and I love them both. While the original kenchin-jiru is considered to have been free of miso, today many recipes use miso, and I personally prefer it that way, too. The key to a good kenchin-jiru, I think, is to start with frying the ingredients in sesame oil; vegetables stir-fried in aromatic sesame oil, combined with kombu-based dashi broth, make a deeply flavorful soup that will satisfy the appetite of those vegetarians or otherwise. If you are after a recipe to start with, maybe you can start with this one; add miso at the end if you'd like.


Because soups always taste better when made in a large batch, I tend to do so - and the leftover is still great just as it, I sometimes serve it in another way: 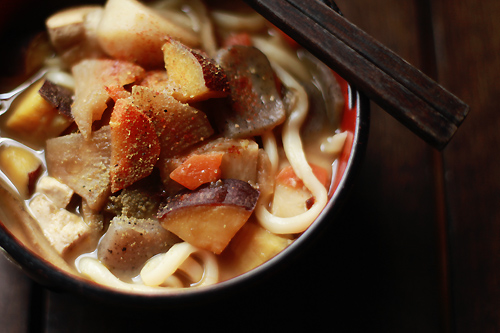 Udon in kenchin-jiru, hence kenchin-udon; you may want to adjust the saltiness of the soup, for the addition of udon tends to make the soup taste a little thinner. Don't forget to top your bowl with a good dose of shichimi!


Another great soup for a cold day: 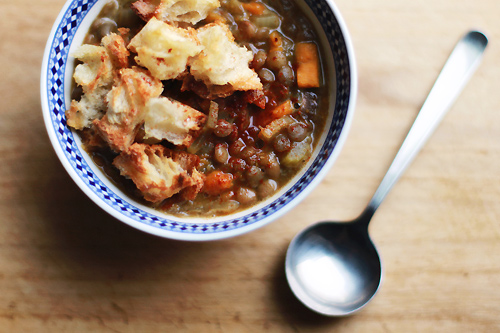 Kabocha and lentil soup, from the ever inspiring Heidi's recipe; you bake kabocha squash in the oven, simmer lentils with spices, and steam-fry vegetables, all of which are blended into a chunky soup with a kick of spices.


The recipe uses star anise and fennel bulb, both of which are something I'm not exactly partial to - and happen to be rather hard to find in Japan (well, star anise isn't, but fennel is); so I simply skipped them. Instead, I used celery - stalks in place of fennel bulb and leaves, star anise. So my soup might have been a bit heavy on celery flavor, but it came out absolutely delicious nevertheless. Oh, I used the skin of the squash, as well - I love kabocha, both the flesh and skin, so couldn't toss the skin that was left after scraping out the flesh. And that didn't hurt at all.


I used an artisanal sea salt & spice mix from Australia, which consists of such things as lavender and caraway, among others, and this helped add a further depth of flavor to the soup, I think. Heidi suggested that you can top the soup with a swirl of creme fracche, which I thought was great - though I finished my batch before doing anything with it.


Yet another vegetable-laden soup: 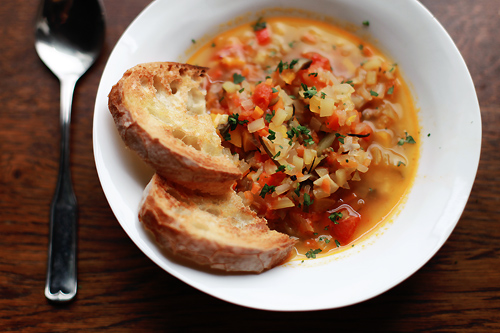 Minestrone must be the most widely known Italian soup in Japan - or dare I say the only one? Often tomato-based and invariably with a lot of diced vegetables, it is one dish that you'll see on the menu of almost any Italian restaurant here. And I'm not complaining; I love it, too.


The recipe I've used heavily since last year is from my friend Taeko's second book (in Japanese) that came out early last year. It builds on a array of vegetables and a bit of pancetta stir-fried in olive oil, which imparts layers of flavors to the finished soup - very simple and straightforward to make, just a lot of chopping.


As much as I love the recipe, this time I wanted to make it vegetarian - no pancetta or bacon, and not even vegetable stock; just vegetables, and a lot of them. I started by sauteing onions, shallots, celery stalks, carrots, and mushrooms (all chopped) in olive oil until soft - maybe a bit like making soffritto. Into the pot the next was zucchini (chopped, too) followed by a glug of white wine, along with a bunch of herbs - Italian parsley, rosemary, and basil, and cooked a little further. Then I added cherry tomatoes (yes, chopped) and some water to simmer the whole thing on a low heat for a while until everything is cooked and the flavors mingle well. Oh, I added bell peppers (guess what - chopped) sometime in between.


In the absence of meat, the soup tasted substantially lighter - but none less flavorsome. It fills you up without making you feel too full, which I think is great.


Because I knew I'd have to chop a lot of vegetables, I decided that I might as well chop really a lot of them, to make a huge pot full of the deliciousness. Oh it was an intense and intimate a-mound-of-veggies-and-me-with-a-cooking-knife time. 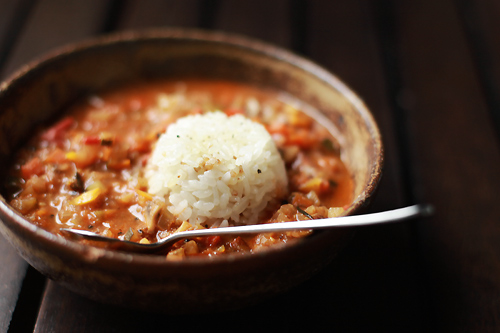 And some of the leftover was turned into another dish, by adding some Japanese curry mixture (I used a meat-free kind here - might as well keep it all vegetarian, right?). I know this is totally NOT an Italian thing to do, but being a Japanese I couldn't resist! Ever since Taeko first introduced me to this way of turning leftover minestrone into curry, I've been doing it all the time - as long as I have any leftover, that is.

Now we are heading straight into March (I mean, where has February gone anyways?), the cold and warm airs seem to be busy taking turns, and although there are increasingly more warmer days, it still does get a little chilly in the evenings. I'm not doing nabe too often any more these days, but I can say soups such as these will totally be staying around for a while - until they are replaced by more springy kinds (peas! asparagus! fava beans!). It's great to have something to look forward to for every season ahead of you? (Maybe a bit less for summer with me, but that's another story...) 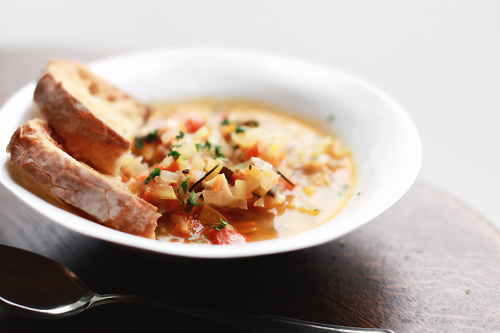 I know I have said it before, but your photography is just beautiful! The food looks so appetizing, and I can't wait to get into the kitchen to create soup! Thanks for the inspiration!

wow. speechless. i'll take any of those soups right now, especially since i didn't eat anything tonight!

I've been visiting your blog for a long time, but never dared to post a comment...
Your pictures are gorgeous. I worship you :->

Your pictures are just so beautiful! I know we make something similar to the soup you made but that bowl there looks so much more appetizing than my curry:). I am glad Aran mentioned you otherwise I might have missed this treat!

I am just discovering your blog (thanks to Cannelle & Vanille) and I LOVE it! Your pics are amazing!
Congrats! :)

I can't wait to try the Kenchinjiru recipe you posted, yum! I adore soup.