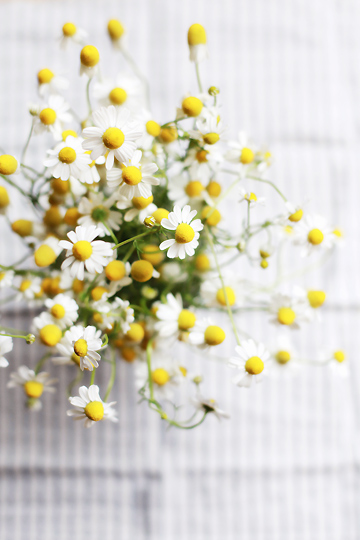 waking up to a dark, rainy morning isn't the best way to start a week, but things seemed to look slightly sunnier with a cup of freshly-brewed tea with fresh chamomile... and a glass full of fresh chamomile flowers alongside.


i'm not really crazy about chamomile tea made with dried flowers. but if it's from fresh chamomile, it's another story - the sweet, soothing, refreshing smell of the flowers shines through as they brew in hot water. we don't find fresh chamomile too often around here, so when i saw large bunches of the flowers, i was super excited! 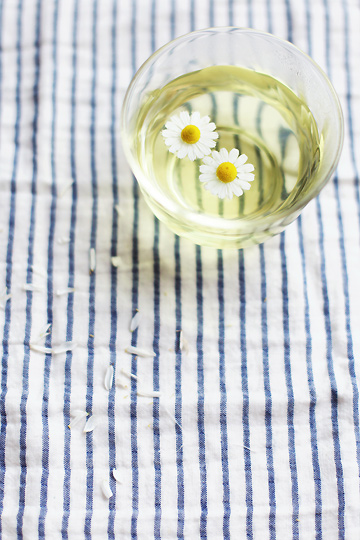 i enjoy fresh chamomile tea as is, but adding a few sprigs of fresh mint to chamomile tea can make it even better suited to drinking in the morning, with mint boosting the wake-up factor. in the evening, chamomile tea may be known as a bedtime brew as it is, but i also like to make it with milk instead of water. it seems to make the tea taste mellower, and even more calming.


because i had a large bunch, i decided to make something other than tea (with or without mint and/or milk), but couldn't bother to go out to buy ingredients in the rain. so i threw things i had at home together into a pan - and out it came: apple and white peach poached in chamomile tea.


sliced apple was gently cooked in fresh chamomile tea along with juice of lemon and dessert wine until tender, and a sliced white peach was added at the end before removing from heat so it'd get only slightly cooked. there i tasted the cooking liquid and thought it was sweet enough, but i was told otherwise so i added a bit of honey. a few chamomile flowers were thrown in as the fruits cooled, then got chilled before serving. 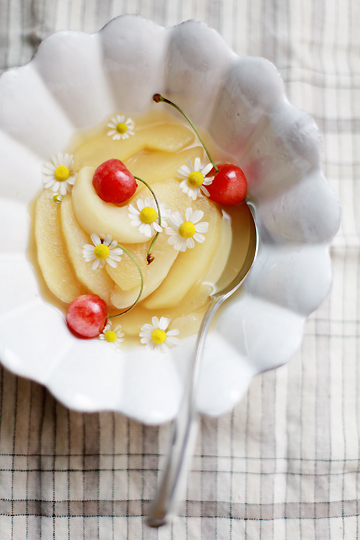 cherries were optional but added a bit of nice crunch to the bowl of soft fruits. a dollop of lightly whipped cream, creme fraiche, or even yogurt would have made a nice accompaniment, too.

It is pretty gray here as well Chika. I couldn't agree more with you about getting up and enjoy freshly brewed tea (in my case coffee). Your photographs capture your mood pretty well.

Oh Chika, that is BEAUTIFUL!! I've never had fresh chamomile tea and now I absolutely must. The blossoms are lovely and so cheery. :-)

I love chamomile tea but never tasted fresh ones... I wish I could get some!

wow, look at that, the color is perfect, I bet the taste is as good as the color

I found your blog recently when I was browsing for posts on Tokyo's Pierre Herme. Beautiful photos and very intriguing entries! I think I'm a fan :)

I used to work at a Japanese tea shop too back at uni... brings back memories. Definitely could do with some Chamomile tea right now...

I like the decoration ! tasty food in a rainy Monday

thanks everyone for dropping by! we've bought some chamomile seeds and can't wait to have more fresh flowers!

thank you for your wonderful and delicious photographs! I wish I can take such beautiful pictures like yours when I grow up...

I love chamomile tea but never tasted fresh ones... I wish I could get some!