lavender to chill out, & start of summer 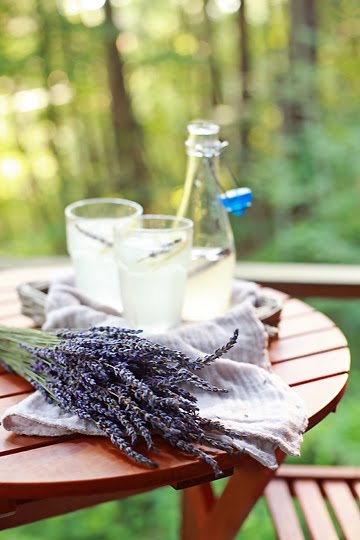 I'm not sure how it is already Friday again (actually it's past midnight in Japan, so it's Saturday really), but I had a busy one playing with summer fruits (reads: preparing homemade fruit liqueurs and boozy fruits!). Having been away for a few weeks on a trip means that I had a lot to catch up on where early summer fruits are concerned.


Between my time in front of computer and in the kitchen, this week I went out for a day to check out a lavender farm not too far from us, as I'd heard that the flowers were now in full bloom. It has long been my dream to see an endless stretch of lavender fields like the ones in Provence or even in Hokkaido (Biei and Furano are famous for them). I'd known it wouldn't be quite the same here, but I was still fairly excited.

As it turned out, the fields were even smaller - much smaller - than what I'd expected them to be. So I think I'd still need to go to Provence or Hokkaido for my dream lavender fields, but it was still nice to be out and about, stretching my legs.

... That said, walking around in the fields under the scorching sun for an extended period of time (which in my case is longer than half a minute) wasn't exactly my thing, so we left pretty quickly - only after getting ourselves some ice-cream (of course!).

They had lavender-flavored soft serve (what else?) there, and I got a vanilla-lavender combo; because too often lavender-flavored sweets have such a potent flavor that they make you feel like you're eating soap rather than food. This ice-cream, on the contrary, had only a very subtle lavender flavor and we enjoyed it very much, except I had to wolf it down as it quickly started melting while I was taking just a couple of shots in front of the field.

The fields were located on a hill and had a fantastic view over neighboring towns and mountains that surround the area. It would have been nice to take our time and enjoy the view. Perhaps next time, when it isn't 90F/32C degrees out.


Back home, inspired by the ice cream, I fancied making something flavored with lavender myself. Now to tell you the truth, I'm not a big fan of lavender scents, particularly in cosmetics and fragrances; they tend to be just too potent for me and kind of put me off. But every now and then I enjoy lavender-flavored food, and found some of them to be quite tasteful - and ones that I enjoy are almost always very subtly flavored. So when I use lavender in food, I try to be very careful and go very easy on the amount of flower I use; one too many buds and they ruin the whole thing.

I am thinking about cakes or some desserts, but today I opted for an easy route and made myself a bottle of lavender-honey lemonade. Simply boil some water, throw a bit of lavender buds (you can do either dried or fresh) and let them steep for a minute or two. Strain the mixture to remove the flower, add some honey to dissolve, and leave it to cool for a while. Now add a lot of freshly-squeezed juice of lemon, and serve it in a pitcher or bottle along with cold water (still or sparkling - I prefer the latter), and a lot of ice. Garnish each glass with a slice of lemon and/or a fresh lavender bloom if you like. It is lovely with sparkling wine in place of water, as well.

I had this on our balcony in the late afternoon as the sunlight rayed through thick trees. It was another hot one today, but these trees provide a wonderfully cool shade that keep us mostly comfortable.


We have a three-day weekend with the next Monday being Marine Day, which is a public holiday. This weekend is commonly considered as marking the start of real summer - although whether a few weeks of 90F/32C+ temperatures that precede Marine Day shouldn't qualify for real summer, I do not know. But many schoolkids start their summer break and lot of beaches open for the public over the weekend, so we definitely feel it's summer now.


Whether it is a three-day or two-day, or even one-day weekend that you are having, I hope you're having a great one! -cx

That ice cream sounds amazing. A friend of mine makes really tasty lavender mascarpone cupcakes. Just a touch of lavender. And delicious

Love the purplish-ness of lavender. You have a lovely blog. Have a great weekend - shaz

I saw this post yesterday and had to make lavender lemonade. Delicious and I so love your photos.

Maria @ A Platter of Figs

I´ve just came back from our holidays in Provence and I did make sure to visit the Valensole Plateau which is indeed breathtaking.

I didn´t know Hokaido had also lavender fields. I guess, I should add it to my endless list of places to visit in Japan.

And that lavender lemonade, well to me it resumes french summer!.

I love lavender! I had some lavender ice cream at a restaurant a couple summers ago that was incredible!

Chika this is fantastic for me as I'm surrounded by lavender fields in Provence!

I love lavender when it is light in flavor as an added surprise flavoring. Those fields, and ice cream looked like a good enough reason to get outside for a few minutes.

Love your pics . You blog is awesome! With love Ste

hi all, thanks for your comments!

Maria - glad if you enjoyed it!

heidi - oooh i'm jealous! hokkaido is forever near the top of the must-visit place list for me...lol.

Jwilkie82 - you know what, i was dreaming about provence and next moment you were there!! lucky you. glad to see you had a fab time! x


thanks again all! x

Those fields are so gorgeous! Definitely not too small for a girl from Jersey! Love it.

I love the relaxing smell of lavender. Your photos here reminds me of the beautiful lavender farms in the Central Coast of California, near the small Danish town of Solvang. If you ever go to California, this town is worth checking out!