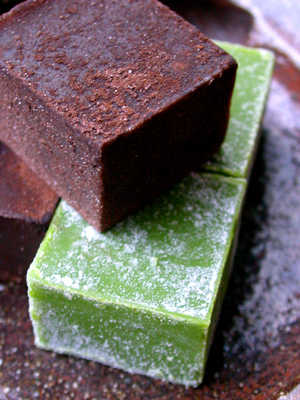 The memories of my recent Kyoto trip are still with me, so are the things I found there. I liked the matcha pavés au chocolat from Nakamura-ya Tokichi so much I mail-ordered another box of them, along with a rather unusual kind of cha-colate: chocolate infused with hoji-cha, or roasted green tea.

Hoji-cha may be much less known than regular green tea outside Japan, but it
is a nice, refreshing tea with a slightly smoky taste that is not unlike that of barley tea. It isn't green, by the way, due to the roasting process. 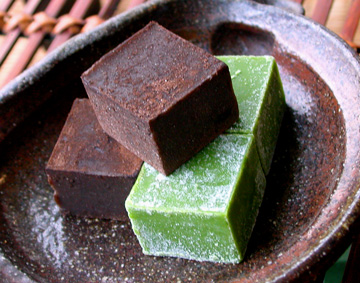 Now there's nothing new about the east-meets-the-west combination of matcha and chocolate in this country, but when it comes to Japanese tea other than regular green tea, it's another story. I didn't know of chocolate with hoji-cha until recently I when saw Nakamura-ya Tokich's*1, and I didn't seem to be the only one.

Just so you know, we never, ever - not at least as far as I am concerned and I know - sweeten hoji-cha to drink. Never. But we wouldn't sweeten green tea for drinking, either, and that made us yuck when matcha sweets made their first appearance years ago. But we are now not only used to them but love them - so why not trying hoji-cha in sweets? At least a try, should we?

I was more curious than suspicious, and the first bite turned my anticipation into conviction: it was yummy! It did taste of fragrant hoji-cha, but in a subtle and pleasant way - actually, if I had eaten a piece without knowing it was hoji-cha chocolate, it could have been hard to figure out the secret. 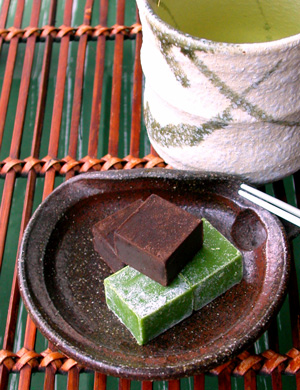 Together, the matcha and hoji-cha chocolates made a nice company to a cup of green tea*2 freshly brewed using leaves I also bought from the same tea shop.

*1: Although, I did know of hoji-cha kasutera (sponge-like egg-rich Japanese cake) sold by another Kyoto tea shop Gion Tsujiri, which I bought but haven't tried yet.

*2: It's a bit confusing, but "matcha" and "green tea" are not synonyms; matcha normally comes in a form of powder, and makes very strong, thick green tea whose taste is what we usually find in "green tea sweets". A weak, paler-looking green tea like the one in the picture above, on the other hand, is called ryoku-cha, which literary translates "green tea", and this is likely to be what Japanese people would first associate with the term "green tea". Even now that everyone doesn't get surprised by "green tea sweets", people still won't think of this latter kind of green tea be sweetened... so something like American Arizona Tea would be a pure amaze to some.

We're having really warm weather these days, and here's the last bit of cherry blossoms; this time it's yae-zakura, the one with multi-layered pink petals. 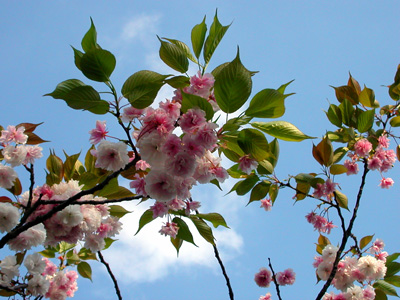 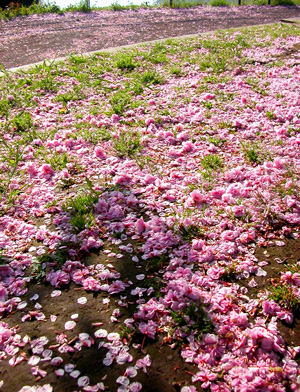 carpet of flower petals is beautiful

Oishi-so! (The chocolates.. not the sakura.) kekeke

oh flying monkeys. too much information regarding matcha and green tea, but thank you for it. i will strive to remember :-) and also try to keep straight hojicha from genmaicha in my brain.

I really enjoyed these Frans . Pocky must be looking over its shoulder nervously.

Just wanna say that your shots are very nice indeed. I wish I could take photographs like that..

hello! i am a new visitor to your blog... and i just wanted to say it is so VERY fascinating and beautiful! ^.^ i thoroughly enjoyed the great photos, your little stories about the food (OH yes! ^.^), and the way you write... very simple and modest, in a way, but still very expressive.

i hope you don't mind if i link you up in my own humble little blog. (just tell me if you do mind, i will take down the link promptly.) i would like to keep coming back here. ^.^

The chocolates look delicious. Other than eating them plain, with tea, I wonder what they'd be good with? The might be good, cut into chunks, in either a quick break or in cookies.

Ahh...sakura. They never cease to amaze me with their beauty.

frederique - it really was beautiful!

santos - o I might have made it sound too complicated. Genmaicha is made from brown rice and it's a whole another thing, but I have to admit it taste a bit like hoji-cha for sure...

anthony - I've tried that one and enjoyed it, too. They've been competing so hard in putting new (and limited-edition) flavors, I've stopped tring every single one of them... there're too many.

juzagirl - thank you very much, I am tring hard to take better photographs as well.

shiko-chan - thanks for your kind words and a link to my blog.

i absolutely love your site!

Were those Royce chocloates from Hokkaido??