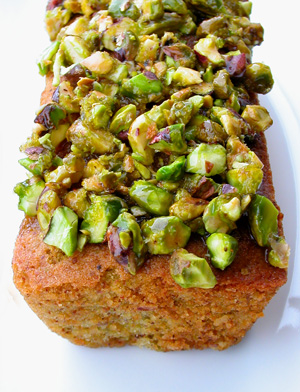 It was a love at first sight, so to speak. I first saw it here about a month ago, and I already knew I was going to make it - and now I finally have, thanks to Josh who has included the recipe in the post. The cake, simply and rightfully named Pistachio Cake in book Italian Easy: Recipes from the London River Cafe by Rose Gray & Ruth Rogers (Clarkson Potter, 2004), features pistachio and lemon - two of what I would most associate with Sicily - in both cake and topping. I love pistachio, I love lemon, then how can I go wrong?

Of course I didn't. The cake was really rich and slighly crumbly because of the high content of nuts (pistachio and almonds), and surprisingly lemony. 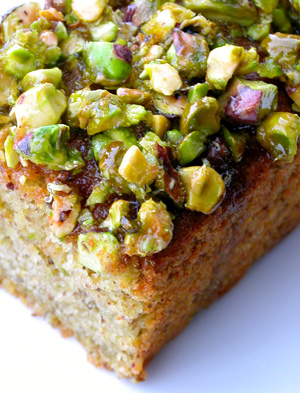 It tasted delicious as is, but what was even better was the topping; I would typically skip anything called "syrup" or "frosting" for simple cake like this, but this one looked too good - a bunch of pistachios in the syrup made from lemon juice and sugar. It actually added an extra kick of lemon and a crunch of the nuts, making the cake that was already rich and brisk even more so.

The topping also made the plain cake look really pretty with its gloss, giving the pistachios an almost gem-like shine. I loved it! 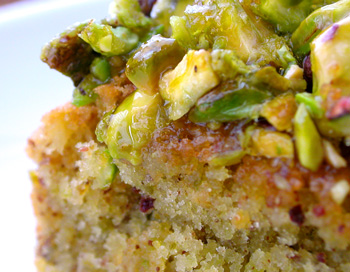 Because I didn't blanch the almonds or pistachios, the cake itself looked a bit dull and not as green as you might fancy, but I didn't care...

Speaking of green, I made really green cakes on another occasion; I tried green tea financiers, using a recipe in Les Gateaux de Mamie by Marie Brazier (Marabout, 2002), the book Estelle kindly got me from one of her recent visits to France.

This was the first recipe that I tried from the book, partly because I was interested to try and see how a French recipe using a Japanese ingredient (matcha, or green tea) would turn out, partly because I was curious about the recipe of financier using whole eggs; as far as I know, financiers usually use egg whites only. Or maybe just because I was tempted to use my new FLEXIPAN mini-financier pan - in fact, I made these on the same day I made yuzu & olive financiers. 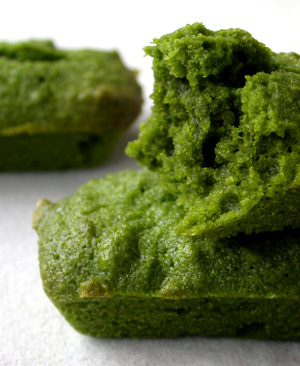 The cakes were a breeze to make, and somehow turned really green, a lot greener than they looked in the photo of the book. I mildly wondered why as I was making the batter, and then realized that I used too much green tea powder; I put a tablespoon, as opposed to a teaspoon, of green powder - oops! It was too late. Not surprisingly, the cakes had a really strong taste of green tea, which I actually didn't mind, but a little less would sure have been just right.

Not a green thing, but a pink: last night I went out to see some cherry blossoms in a nearby park. Japanese people have been particularly partial to cherry blossoms for at least a thousand years, busy talking about which spots have good ones, when they start blooming, etc, making it almost a ritual to celebrate them as a symbol of the arrival of spring.

Blossoms are beautiful in the sunshine, but they also have an allure in the dark. 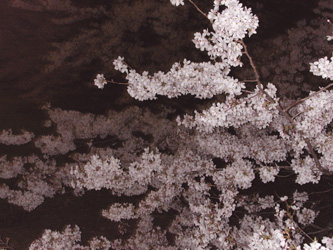 I've never been in Japan when the cherry blossoms were in bloom. Lucky you and such a nice picture too.

Hi Chika - I couldn't access your site for a while, was that just me? Now I'm happy to see this pretty green&pink collaboration :)

I have to admit that I'm also in a *green* mood at the moment, I'd like to try matcha mille feuille or pistachio opera next... how does that sound? (I bought this "Easy' book ages ago, but didn't realise this pistachio cake was in it!)

Your financies look so delicious (and so green)! Could you put the recipe up for me please? I bought some new financiers moulds last week and am looking forward to trying it out. (Speaking of financiers, I made a cake called friands the other day without knowing it was financiers! I thought the recipe was very similar to financiers, but I believed that was a different cake... it was delicious, nontheless.

DId you take the cherry blossom picture in Tokyo? One of my friends there said that it's in full bloom at the moment, I SO wish I was there... enjoy the beautiful season.

Wow. The pistachio cake looks really great. I really liked the topping too -- tart and not too sweet. The color of the financiers is wild.

So, you made the pistachio cake too... Not that I made it, but I am planning on it! I actually bought some dates last Sunday, I am planning to make the dates in mulled wine soon because it sounded so yummy! I am glad your financiers turned out well, hopefully the other recipes won't disappoint you either.

Keiko: I also had trouble accessing Chika's website a couple of days ago. I was scared she closed it but I could manage to access her posts through Google. Everything looks OK now.

Oh my. That looks too good. Dangerous. I got to see the Cherry Blossoms here on the Big Island. This year was a bit warmer so the trees were kinda bare. Still, very pretty.

your cake looks fabulous! a lot of people seem to be making this lately! i may have to jump on the pistachio cake wagon :)

i have a cherry blossom tree as well.. they're so beautiful!! i have already taken several pictures as well.... they just shout spring.

Hi Chika, thanks for this post on the pistachio cake. It looks good & healthy, so I think I shall try it too! By the way, was thinking of adding a link from my blog to yours, if you don't mind!

Also, cld I have your matcha cake recipe? I love matcha but never know what to do with it, in terms of baking! :)

How interesting, my Iranian friend just gave me a bag of lemony pistachio.....now I have a clue of how to use it up!

I just discovered your site today while looking for 'Japanese sweets', and it is incredibly delicious!Japanese foodstuffs' hard to come by where I'm from so I adore looking at pretty pics of Japanese desserts, food in general, and reading about them.Kudos to a lovely lovely site!!!

mmm pistachio thats gotta be good! must give it a try!

Reid - too bad you didn't make it this year, but maybe next year? :)

Cat - yeah maybe too much of green :P

keiko - matcha mille feuille! pistachio opera! terrific ideas, except that you'd have to wait to try them til I come over!!!
are friands same as financiers? didn't know that either. hope you like the matcha financier recipe.
And cherry blossoms, yes those are in tokyo. it was my first and last hanami in tokyo this year (but of course, I saw a LOT in kyoto!)

Estelle - merci beaucoup for the book :) I've got a lot of recipes I want to try in the book. I somehow missed the apple season this year, so I'll have to wait till autumn to try the apple crumble!

*it was a bummer some of you guys didn't get to access here... I did get to browse, but I did have some troubles leaving/seeing comments. Those things happen with Blogger now and then.

Trisha - I never knew there are cherry blossoms on the big island... there are so many things I have missed out.

Emily - yeah, a lot of them :D they all look good!

spots - the pistachio cake was really good. I'll try and get you a translation of the recipe of matcha financiers one of these days, unless you read French (then I can send it to you right away).

vegimouse - lemony pistachio?? omg what on the earth are they like? I'm so curious...

Chris - thank you! hope I can offer more Japan stuff that might interest you :)

suze - it WAS good. seriously.

frederique - thank you, I'm very happy with how the picture of pistachio cake turned out, not to speak of how good it actually tasted :)

I have just come across your website. I am definately bookmarking this great website! Wowweeee what glorious colours I could just eat my monitor!

I was wondering if you could email me this fab looking green tea financier recipe as well as the yuzu financier recipe? I did click on the Japanese recipe link but couldn't find an English translation anywhere.
I am grateful to you thanks soooo much!
D.

Hello,
I've never done this before, so I hope you reply. I adore Financiers, and also Green Tea. Could you send me the recipe PLEASE. I do read French if that helps.
Many thanks,
Susie

Hi !
I'd like to have a look as well at this particular recipe of Financiers, for the use of whole eggs surprises me too ...
Maybe you don't want to give it ... well to bad for us ;)
I wanted to say that as far as I know, friands and fianciers aren't the same thing at all !!
Well not here, in France...
A friand is a salty dish, made with pate feuilletée and filled with meat usually or sausages... or else..
And the finacier is this light little cake made with only the white part of eggs... usually..
According to me, when you put the yellow part, the resukt might be closer to madeleine than financier but I have never tried so...

These are beautiful: both the pistachio cake and the financier one.I am looking for a match financier recipe myself.