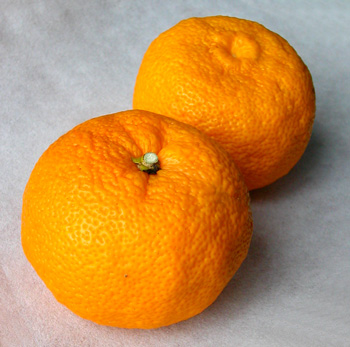 It's already April and the yuzu season is basically over, so I should better hurry before it's too out of place; celebrating this fabulous fruit, King of Japanese winter citrus.

Often seen in Japanese cuisine and sweets - increasingly in Western-style ones as seen in Pierre Herme's entremet and macarons, and much humbly, in my recent yuzu tartelettes, yuzu is a citrus that is used almost like lemon, i.e. by grating zest and squeezing juice. It has a distinctive bitterness which is a bit resembling that of grapefruits, but they don't seem alike at all - yuzu is usually larger than lemon (but much smaller than grapefruits) and has lumpy skin (for more details, refer to this).

Another noticeable difference from lemon can be found inside: 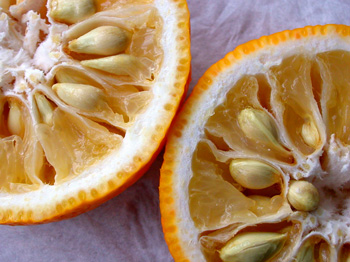 Yuzu is really seedy, and has very little juice to squeeze out. In fact, what people use the most out of this fruit is the zest rather than the juice, although a little amount of yuzu juice goes a long way in splashing over such things as tofu, vegetable, fish, you name it.

It is increasingly used in cakes and desserts in Japan, both commercially and domestically. With yuzu I have made and loved things like pound cake, sponge cake, cookies, mousse, sorbet, etc. etc. other than the above-mentioned tartelettes, and just recently I made another thing; yuzu financiers, using grated zest and juice of yuzu as well as home-made yuzu marmalade that my mom had made in the height of yuzu season. 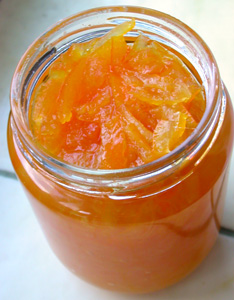 Financiers are traditional French tea cakes made using egg whites, ground almonds, and browned butter. The recipe (in Japanese) I used this time is, although it calls it "financier", not exactly financier because it uses olive oil rather than butter. Well I still used my brand-new FLEXIPAN mini-financier pan anyways! 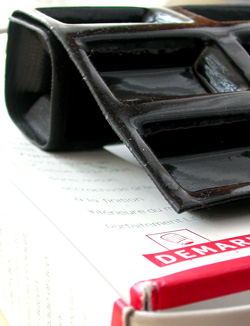 Making the batter was dead easy as I had readily-ground almonds, and what was more, I didn't have to brown the butter. It was ready in a flash and went to the oven right away. 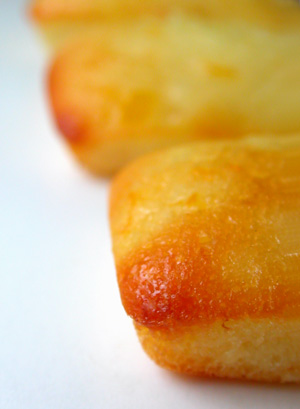 Now I have heard that Flexipan molds (and other silicone pans) wouldn't brown the baked stuff as much as conventional pans do, which seemed to have proved true in my kitchen. Also, the tiny oven we use over here - as small as a microwave oven, or in fact, a lot of them are an oven-cum-microwave - isn't as powerful as larger ones, which together makes baking time longer and color of the baked stuff paler. That was probably how the financiers came out really pale, almost looking as if underbaked, even though they weren't. 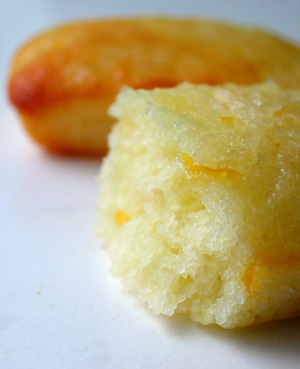 At any rate, covered in plastic wrap and let sit overnight, the financiers - or yuzu-olive cakes, if that sounds more appropriate - were really moist and light, and had subtle but noticeable flavors of both yuzu and olive oil. To tell you the truth, I like yuzu pound cake that I have made over and over (which I haven't blogged yet, unfortunately) better than this, but the rather unusual pairing of yuzu and olive oil was a nice change for sure.

Now the season is over and yuzu wouldn't be sold in bulk in grocery stores any more. I believe that yuzu is really hard to find outside of Japan and maybe Korea, but the same is true in Japan other than in the winter. For now we have some marmalade in the fridge and grated zest in the freezer, and bottles of yuzu juice in pantry shelf, to keep ourselves quiet for a while - and the rest of the time till later this year, we'll all look forward to seeing the first crop coming in the beginning of the winter.
posted by chika at: 4/04/2005 10:58:00 AM

That looks SO scrumptious!! You're a good baker and photographer! ^^ I haven't tasted yuzu yet, but my mouth waters just thinking about it...a cross between lemon and grapefruit - yum!

Wow.. this looks yummy.. any chance I could get a translation of the recipe though? Much appreciated, thx!!

Hi chika!
I wonder if the yuzu fruit is somehow connected with chinotto's  ? The way you describe their taste (bitterness) would perfectly match. I need to see if yuzu's can be bought in Germany, although like you said I might be to late for this year...your yuzu-olive cakes look delish.

I've never tried yuzu before as I've never found them here. Did you have a hard time finding them when you were in Hilo? I think I'll need to check Shirokiya, they have that small area upstairs that might have some.

BTW...those cakes look delicious and so does the marmalade. I'm trying to scan the article from Honolulu Weekly so that I can e-mail it to you. Unfortunately, my scanner is not being cooperative. =(

I was told that yuzu don't grow in Hawaii. How true I don't know. Been that you lived in Hawaii, do you think the weather is conducive to yuzu's growth. One of the people in our neighboorhood has what I thought was an orange tree, but it's so sour/bitter and there's a lot of seeds. Now I know why no one picks the fruits, it just drops on the ground. Looks like your pictures and it looks like it's the end of it's season as well. Although I don't know if it's the of orange season as well. Could it be a yuzu tree? Could you share a recipe for ponzu sauce. I'm like to try it with "that" fruit. Thanks............

Ko - sorry about my much belated reply, I'll try to squeeze some time out to translate the recipe and send it to you sometime hopefully soon. Thanks!

Oliver - wow it was my first time ever hearing about "Chinnotto". I don't know what they're like, but very interesting. (Actually, the page you have linked to briefly mentions yuzu as a "lemon").

Reid - I actually never saw yuzu in hilo or anywhere else than Japan. Wonder why, the climate seems okay as they grow in warmer parts of Japan. Thanks for the article, there's no need to rush at all!

lance - mmm, I might have had a wrond idea then, as I thought the weather would be just fine... I don't know though. I have such a brown thumb! :(

As for ponzu, I'd make "easy" ponzu by combining some soy sauce and juice of citrus (yuzu, kabosu, sudachi, lemon, etc), but traditionally it is made using dashi (fish broth), soy sauce, and citrus yuzu with vinegar and/or mirin (sweetened sake).

hi chika! i don't know if you received my email, but looking at this post, i'm wondering if the fantastic marmalade you sent me was made by your mom? it really is the best i've ever had.

Awesome website chika! I was doing a search on white chocolate w/ black sesame seeds because my friend brought some for me to try. I love it! I hope to find some in the Japanese markets in San Francisco, CA. :)

Okay, I just found you looking up the scent, and now I'm even more intrigued. Japanese winter citrus is the BEST summer scent, and I just want to eat marmalade all day long...Thanks for the info!

HI Chika,
Hey would you like a natural health and beauty gourmet friend in CA? Perhaps we can help each other find things?

Cute name, great posting and pics on yuzus! Can you please tell me the beauty/bathing use/traditions of them? I am planning to buy a tree here in CA. Also as you sound a gourmet gal, can you please connect me with sources for the following wonderful Japanese ingredients I have been looking for for ages? I am into all gourmet, organic, and as natural, artisan and raw as possible health and beauty "medicines'!
1. Marna bath brushes - the triangular brush they call "foot brush" with vegetable fiber bristles. Can't find source in or to send to US
2. Raw, organic, unrefined, unfiltered camellia nut oil for beauty, skin
3. Funori/fumori- seaweed for making shampoo?
Thank you so much for any help you can be, and please let me know if I can be of help to you from beautiful northern CA, SF Bay area

Hi Chika-
I just bought 2 bottles of yuzu juice on line.
I recently had it in fresh corn salad. I found
it very intriquing--very refreshing.
Your blog is very interesting--and the food looks
great. More on Yuzu would be appreciated.
Regards from the Hamptons. CG

I just stumbled upon your site tonight. I would love the recipe for Financiers, if you were ever able to translate it. They look delicious and I would love to bake some for my guy.