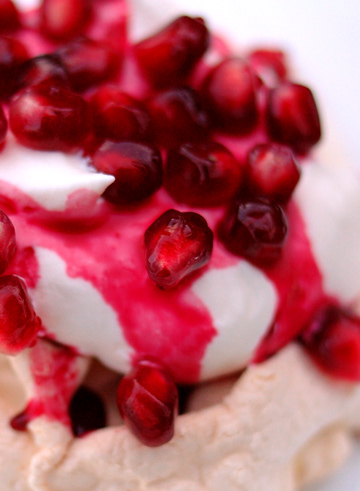 While every gift of mother nature is a beautiful creation, what fruit or vegetable would deserve the adjective "gemlike" more than pomegranate?

When you split it open, exposed are numerous shiny, deep-red garnets crowding in. 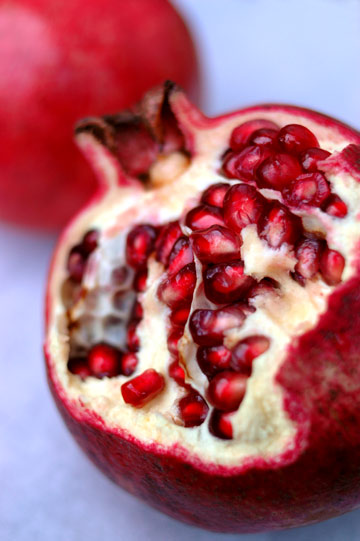 To me, fresh pomegranates were relatively unfamiliar until quite recently, even though I always liked soda with pomegranate syrup as a kid (although, most of commercially available pomegranate syrups don't really contain pomegranate juice). This year I got a few handsome pomegranates and searched up more than a few recipes for me to try. Among several options, what I chose first was something very simple... 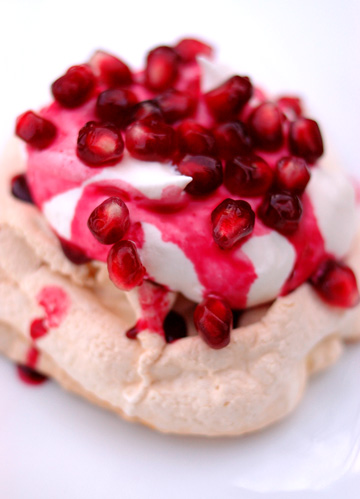 Pomegranate pavlovas, for which I basically used a recipe from Nigella Lawson's How to Be a Domestic Goddess: Baking and the Art of Comfort Cooking (Hyperion, 2001)(US edition). A couple of years back, this would not have possibly been an option, considering that I don't care for baked meringues in general. But over the last one year or so, I have sort of developed a taste for them, starting with French macarons; so I thought I could now give it a try. 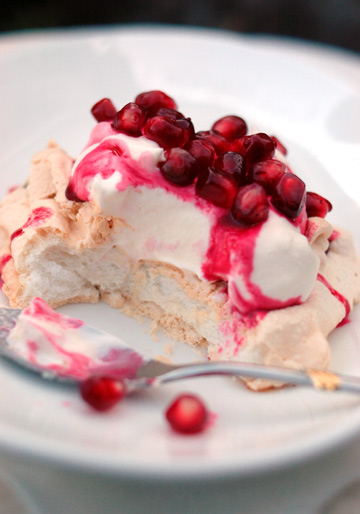 And I am glad I did. They turned out very pretty, and quite a delish; I even liked them, although I could only eat a couple of bites a time. To be honest, I was horrified by the amount of sugar I was pouring into my bowl of egg whites, but I paid respect to classics here, to successfully have pretty mini pavlovas that had fragile crust on the outside and slightly chewy, marshmallowy inside. The tart and fruity pomegranate-lemon reduction and light whipped cream, for both of which no sugar was added, beautifully balanced out the super-sweet meringues, and the topping of pomegranate seeds not only made the dessert look gorgeous but added a nice, crunch texture. I don't mind making these again, sometime when I have a crowd, probably, but I should probably better try to make these a little smaller to suit my own taste.

Back to pomegranates; on another occasion I made another simple stuff with them - a little less sweet ones; muffins. 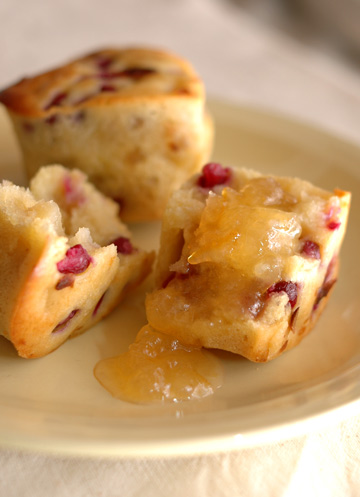 I came across a recipe for ginger-pomegranate muffins in one of Japanese food blogs that I frequent, and couldn't resist the idea (the ginger part, of course). Here I added some cooked apple dice along with pomegranate seeds, and some grated fresh ginger root in addition to crystallized ginger. I changed a few more details, but overall, muffins came out good; there wasn't really anything special about the resulting muffins despite the addition of rather unusual fruits, but pomegranate seeds still reserved the crunch and went very good with both apple and ginger. I think I will do a bit more pomegranate stuff while they're around, as these red dots give some festive look to winter platters....
posted by chika at: 12/16/2005 03:48:00 AM

This is my first time coming here from a search link on google. I'm absolutely giddy at your photos. I'm very fond of food and baking (rather dessert) thus your blog is adore. I'm very jealous.. I found it a lot more difficult to photograph food than others (I generally take landscape).

Pomegranates, I've always been familiar with as in my culture but never so much as you wrote. I liked them in greve punch but I don't see them used much otherwise. Always fresh and plain. Your dessert looks divine. Your quite older than me I believe.. I hope to refine my cooking as you have. Also to appreciate and experiences what is new and strange to me. ^^;

Pomegranates are indeed little gems. I was looking for dessert recipes from the net. Thnaks for the inspiration.

This is very pretty looking. You take great pictures. I added you to my blog. Your pics are a great inspiration!
Thanks for sharing them!

What pretty creations! The muffins are so cute!! ^_^ Thanks for sharing. As a matter of personal preference, do you actually eat the seeds/pips of the pomegranate or eat the red juicy parts, then spit out the seeds? ^_^

Hi there, thanks a lot for your comments!

Tea - that was an issue on my other blog, too... do you eat the seeds or not? Well, I do. I mean, I eat them and swallow them down all the way, never really thought of spitting them out. Interesting!

Except for cherries, I think Pomogranites are my favorite fruit. I love breaking open that globe and finding those little jewels inside. I do just chrunch them up and eat them-inner seeds and all. My French husband looks at me like I am crazy as I eat them. In France they are called grenades which reminds me of hand grenades-I think they did come to be called that based on a weapon during some war-and how they are rather like shrapnel sort of exploding into small pieces when opened. I always end up with purplish fingers when I finish one.

AWESOME SITE! I LOVE THE RECIPES!!!!!