one snowy weekend in Tokyo 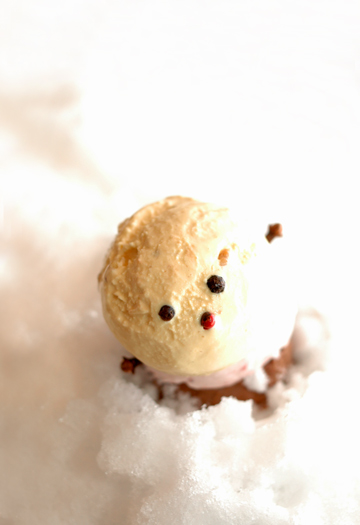 Friday: the weather forecast was telling us that we were going to have quite a bunch of snow in Tokyo on Saturday. Now we usually don't have much snow in Tokyo, really - one winter may typically have a couple of times or so of light snow - but this time, there will be relatively a lot, they said. Here, "a lot" means a few inch deep of snow; if you wake up and see outside to find basically everything is white, that's "a lot". For Tokyo, at least. This winter we happen to have the coldest winter in 50 years or so, and some areas of heavy snowfall have had over 10-feet deep snow, seriously; some hundred people have died in snow-related accidents in the past month and a half. So it wasn't that surprising that we were having relatively heavy snow even in Tokyo.

That evening, I made myself a cup of hot drink, thinking about how much snow we were to have next day... 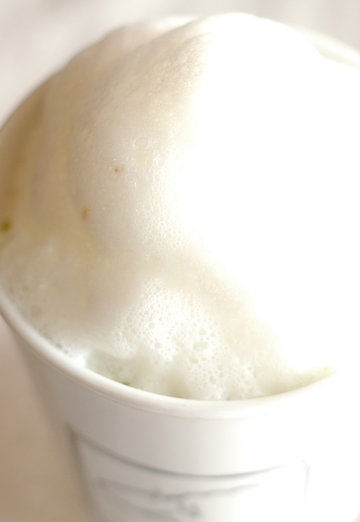 Warm and sweet white hot chocolate with yuzu and ginger, topped with a mound of "snow" or fluffy foamed milk. Excuse me for keep using the same combination of white chocolate and yuzu over and over, but this was a winner. Usually, I prefer thick and strong one when it comes to hot chocolate, but this time I wanted something nicely light, so I went with a no-cream/milk-only version (based on a recipe that seems to have appeared in Cooking Light magazine); heat water with sugar and slices of ginger, add chopped white chocolate, juice and grated zest of yuzu, and milk, which I separately steamed and whipped up to form fluffy foams. 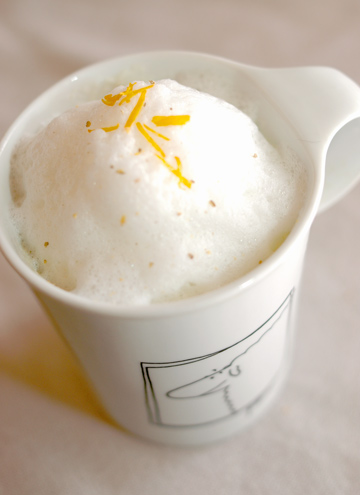 Finished with thin strips of yuzu zest and a couple of grinds of white peppers, it was nice and mellow but not overly sweet, probably thanks to the addition of tart yuzu and zesty ginger. A keeper.

Saturday: yes, the weather forecast had been part right but part wrong; it did snow quite a lot, only heavier than they had forecasted... 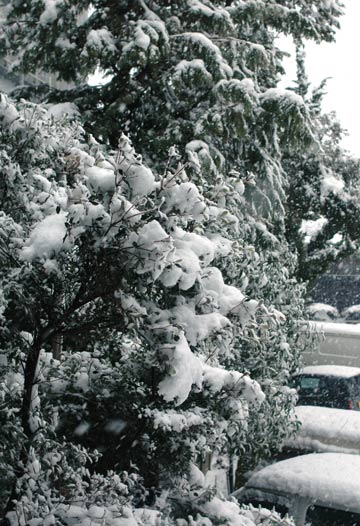 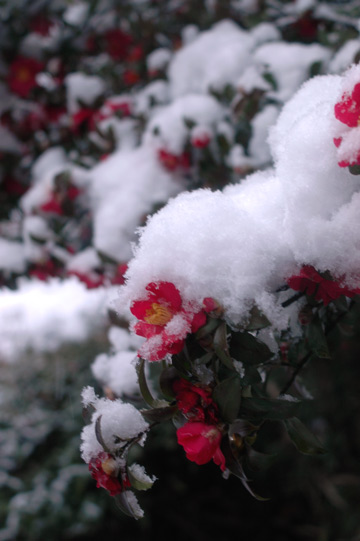 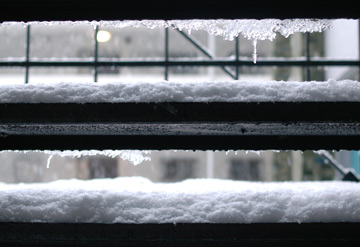 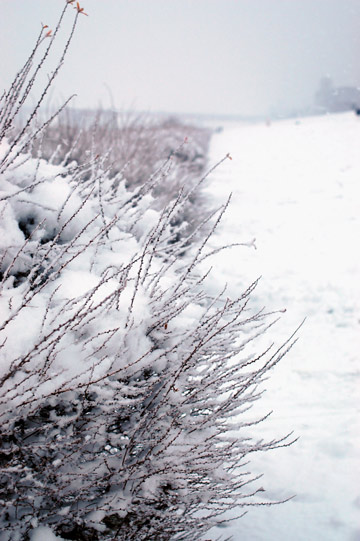 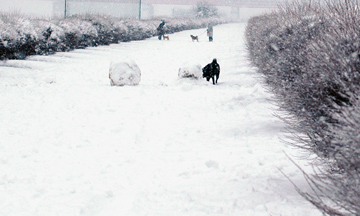 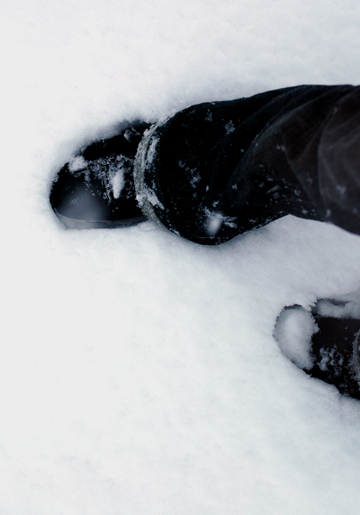 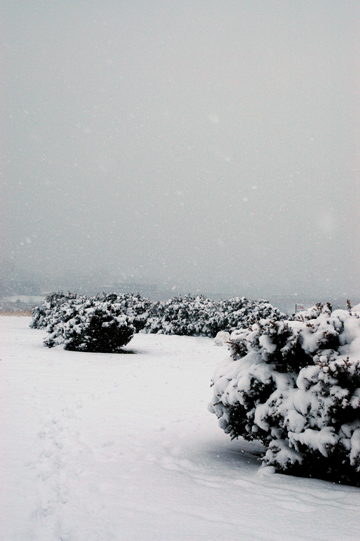 It almost didn't look like Tokyo, or Japan - it was definitely the heaviest snow I've seen in Tokyo in the past five years or so.

To warm up in a cold night such as that one, we had a nabe or hot pot dish for dinner. Nabes are an extremely popular winter dish in Japan, and there must be as many kinds of nabe dishes as there are households in the country; you could almost put anything in a nabe dish, from vegetable to mushrooms, and from meat to fish. That day we had Yuki-nabe, or "snow" hot pot. Also called Mizore (sleet)- or Yukimi (snow viewing)-nabe, Yuki-nabe is named so because of its resemblance to snow/sleet. Here's how; 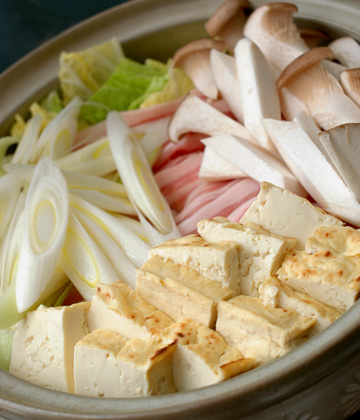 You put some vegetable/meat/fish/seafood in an earthen pot (which is what folks usually use for a "nabe" dish), then - 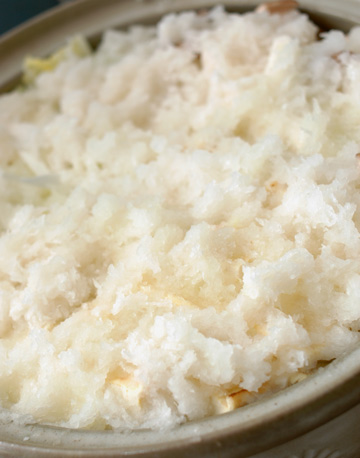 Cover with grated daikon radish, a lot of it, as you can see. This white clouds are what makes the dish resemble to snow or sleet (admittedly, more like the latter), so you need a lot of it. It's quite a labor to grate one whole daikon radish or more, but once it's done, your yukimi-nabe is half ready. Cook it over a heat until everything's cooked - we don't usually use things that require long-time cooking for this dish, so it shouldn't take more than 10-15 minutes until done. 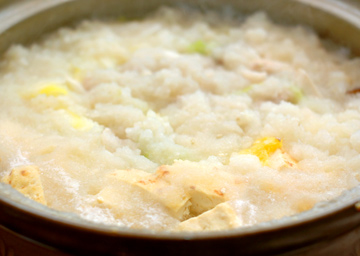 When it's ready, serve the dish in a pot, still sizzling... 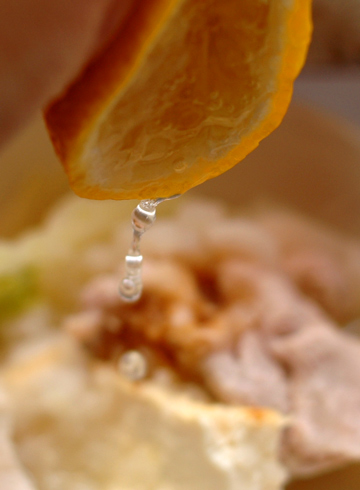 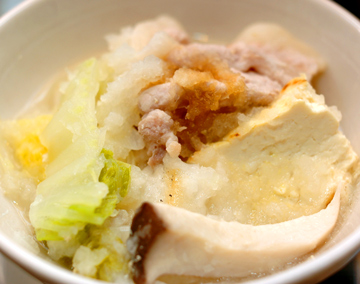 I don't know about others, but this stuff is my all-time favorite comfort food of the season, definitely.

By that time, though still pretty cold, the snow had turned to icy rain, while the following day's forecast was sunny weather, meaning we weren't likely to have the snow lasting very long.

Sunday: mostly clear, with some clouds rolling in. 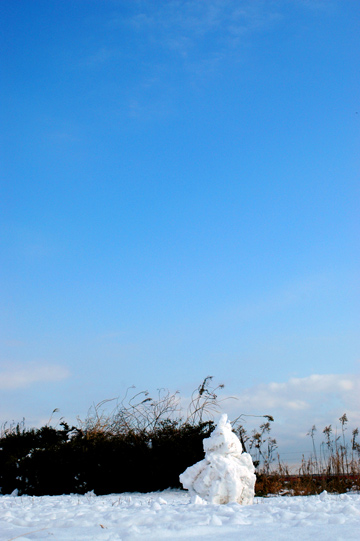 This picture was taken in an open space, which is why you still see snow covering the land, but on most roads and sidewalks, there was only what once had used to be snow - muddy and squishy.

Now, here's my good company in a chilly winter afternoon: 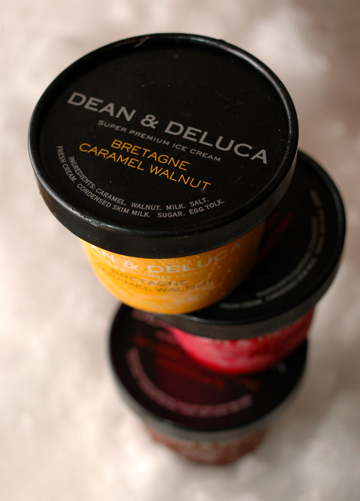 I-scream! What's better than indulging yourself with some premium-quality ice cream in a warm room when it's chilly outside? And this time I got Dean & Deluca's (for your information, they now have stores/cafes in Japan). I don't know if the same line is available in the US or it's Japan-exclusive, but there are Bretagne Caramel Walnut, California Strawberry, and Belgian Couverture Chocolate, along with Madagascar Vanilla which isn't shown above.

Now, now. I have no problem with Dean & Deluca's presence in Japan. They seem to have been doing good here, having just opened their 4th and 5th shops/cafes in Tokyo since they opened their first store in 2003, and I am totally happy with it. What doesn't make me happy hands-down is the fact that these ice creams are sold in convenience stores. A Dean & Deluca product in a convenience store; what's going on? Even though this gives me a convenience (yes, literally) of being able to get quality ice cream within a minutes' walk, I just can't stomach this apparent mismatch of a supposedly high-end gourmet food product and a, um, common-or-garden retail store.

Whatever. All told, it looks like I do stomach their ice cream anyways; and they're good. In a fond farewell to the snow that had a short life on this land, I built a snowman with the ice cream... 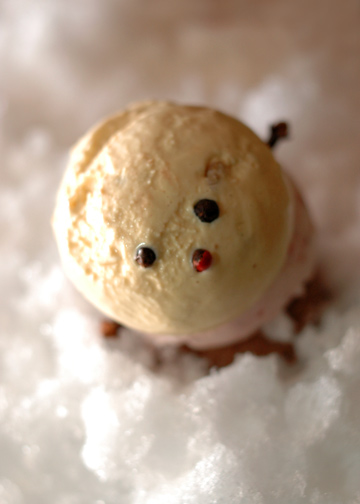 Ah he's slanted and already melting (and looking yummy, above all), it looks like he's going to have an even shorter life than most other snowpeople out there... 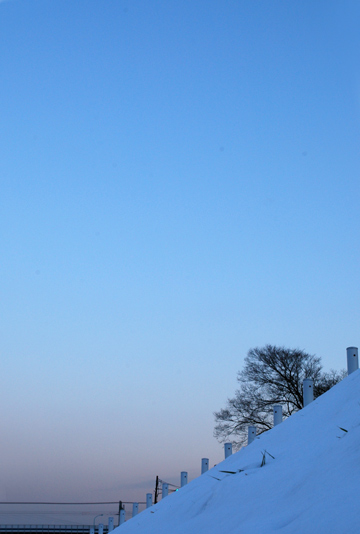 And for the entire week beginning today, we are going to have a more typical Tokyo winter weather; fair and dry. Winter is far from being over.
posted by chika at: 1/23/2006 03:37:00 AM

Seriously. Fabulous pics - my fave is the squeezed yuzu shot!

As always, thanks for posting such great pics and info! Cheers and keep warm!

Great post, Chika. As usual, I love your photos! I can't believe how much snow you got in Tokyo. Although I've never even tasted it before, your pictures and description make me want to have yukimi nabe  NOW! I'll have to seek out a recipe somewhere.

I have just bought my first earthen-ware pot for nabe, but haven't used it yet since I haven't been to chinese grocery recently. Your yuki-nabe inspired me to make it! But I have a question, do you put dashi/broth before you start cooking? Or, the grated daikon itself will generate enough water?

By the way,
in case you missed it..
I'm tagging you with a meme
"10 random facts about you that I didn't know"

if you've done it, just disregard this ^^

Hi Chika,
Your pictures remind me of our weekend trip, while all the snow in Munich is gone right now, just a 45 minutes drive from here we had tons of it... And your blue sky is too beautiful for words!!!

OMG, is this really Tokyo?! unbelievable! does that means the sakura season will come later in April?

Yuki-nabe is a wonderful idea perhaps compensating for the lack of snow for those living in the tropics :)

Aww...that little ice cream snowman is SO cute!! It's so surprising that in Tokyo, where you're not used to getting a lot of snow got SO much of it. Over in Toronto (Canada), we barely got any. By now, it all melted as well. Of course in other parts of the country, they got snowed in, but where I live it's quite warm. ^^;

I must try that nabe! I never heard of grating daikon over top. It looks so oishii!!

Your ice-cream snowman is too cute!!! Thank you for the lovely visit to snow-covered Tokyo. It's such a lovely treat to get a peek at Japanese home cooking, especially yours!

What an amazingly fun post. I love the pictures. My parents lived in Roppongi for three years and I can't recall them ever mentioning snow-my goodness. I'll have to ask the next time I speak with them. I love the ice cream snowman-so cute. Now I might have to go get some ice cream..

Gorgeous pictures! Love them all, really! I love snow and all that goes with it! Your blog is truly inspiring. You are on my fav list! Thank you for sharing this. It seems to snow everywhere these days. I just put up some snow pictures too recently! ;-)

I'm desperate to see the pictures. I'll come back and again in hope they dreaded red x left the place for the pictures to shine.
I come often to read you but never made a comment. This is the occasion to tell you how nice it feels to read your blog and admire your pictures. Everything conveys such a calm and serene feeling.
Should I mention you planted in me the seed of curiosity about wasabi and chocolate... :-))

Just looking at the nabe makes me feel warmer inside. It's amazing how a change in temperature can spark such intense cravings for certain foods. Beautiful post.

Hi everyone, thank you for your comments and I'm so glad you enjoyed the virtual snow viewing :)

Kathy - I think it's generally true that earthen pots are often used in slow cooking, but they are also good when you want to serve your food warm on the table, as they retain heat very well, whether or not the food is cooked slow. I don't know about the sex (gender?) of pots though...

Ceendy - you needn't add any liquid at all to a yuki-nabe. You'll see why if you actually try it - daikons give out quite a lot of liquid themselves. Although, some recipes do call for an addition of broth, especially when they tell you to strain the grated daikon before use.
Thanks for tapping me for the meme, I will try to find some time to work on it...

slurp! - the funny thing is, they forecast a warmer-than-usual March and the same-as-normal arrival of the spring. But you never know, as they said we'd be having another warm winter this year, which has proved to be so wrong. :P

Zoubida - sorry about the missing photos, they're now fixed!

vanessa - absolutely agreed, as I'm just back in chilly Tokyo from warm Hawaii, and all I longed for was a nice and hot soupy dish...

Thank you Chika, I can see all the photos now. It's a treat!

What a lovely, lovely post--the photos are gorgeous! I just found your blog because of a comment somone left on mine. I wrote a post on nabe in January and a reader alerted me to your yuki-nabe, which I have never had before. Even though it is warming up here in San Francisco, I will be making your nabe this week. It looks delicious! I'm looking forward to reading more of your posts.