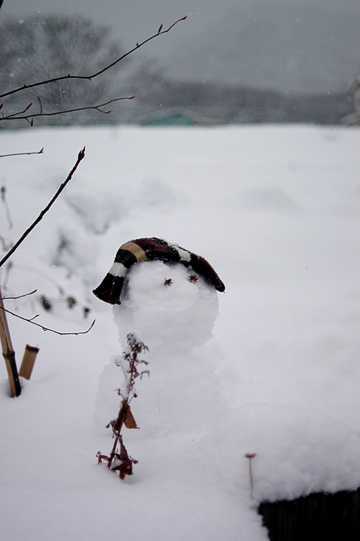 And so you made it back in Japan, this time around in the middle of the winter... sooner than anybody, including yourself, would have expected since your fist visit last autumn?

Get set and go, eat our way in the mid-winter Japan... 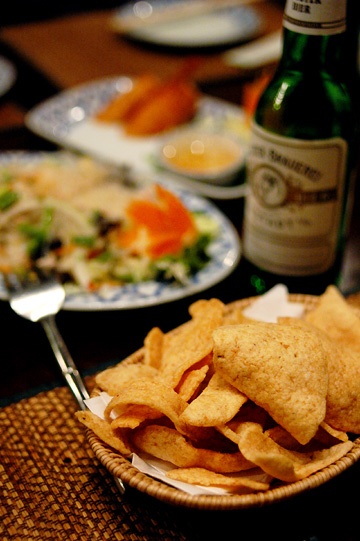 Welcome-back dinner at a Shibuya Thai restaurant, Tokyo; having gotten into central Tokyo after a 10+ hour flight and a couple of hours of train ride, you still managed to go out and party! We ordered way too much food for four of us, but we fared well, didn't we? It was nice to have my favorite Thai beer, Kloster Brauerei, after such a long time, so was their fresh Shrimp chips. Hope you'll get to have a spicy Thai mung bean noodle salad, or Yum Woon Sen, at your local Thai restaurant down the road (failing that, you can make your own at home)! 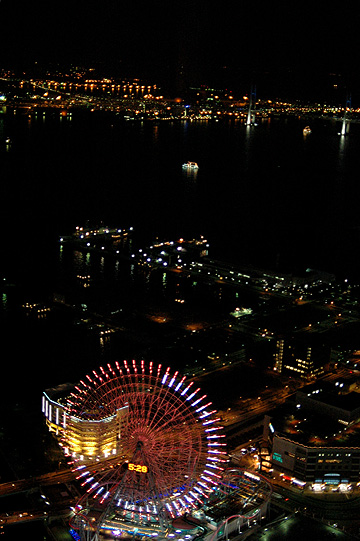 Tea at a hotel lounge 70-story high up in the Landmark Tower, Yokohama; after a brief but important trip to the city, we were a bit tired and desparately in need of a little break. Although the tea was rather pathetic and overpriced in my humble opinion, the view through the window well made up for it I guess. 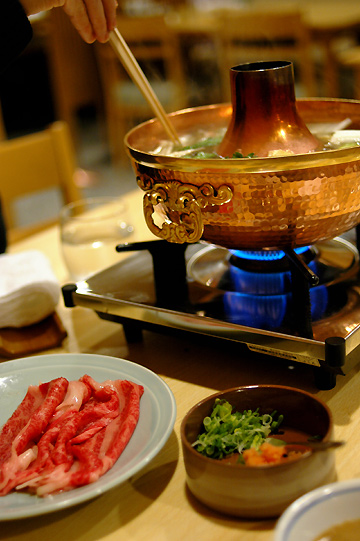 Kobe beef shabu shabu at a hotel restaurant, Kyoto; YES it was Kobe beef and YES it was a real thing. Hope you enjoyed it (phew)! I had a piece myself, too, and it was my first ever and might possibly be the last ever... who knows. It was rather nice, of course (what if it hadn't been????), and yet I was quite happy with my yudofu (warmed tofu) set. And by the way, tofu is much more than just a meat substitute for vegetarians, you see! 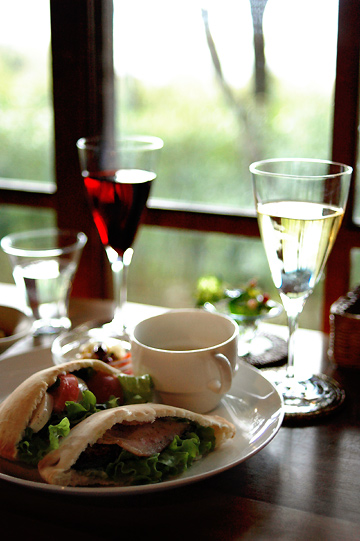 Brunch at a cafe up on a bushy hill, Kyoto; you really seemed to have liked there the last time, so I am glad we made it there again. Food and drinks there are fine, but what really gives the place a special beauty is its hideout-like hilltop location with a view overlooking the city of Kyoto and ranges of mountains beyond, creating such a serene atmosphere all over the place. People there are nice, too, and I'm also glad that we eventually managed to find those wine glasses they used at the cafe back in Tokyo (and that they've made it all the way back home!); here's me hoping to have my wine in one of those next time I'm over at yours. 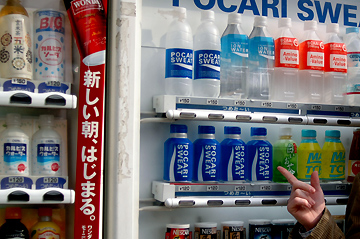 And yes, you made it! Pocari Sweat from a random vending machine (and there was even some Calpis right next to it, which you didn't try to reach... next time I suppose?). Last time you missed your chance to give it a try, so I am REALLY happy you did this time around! And you actually liked it and even brought some home... shhh, I won't tell anyone. 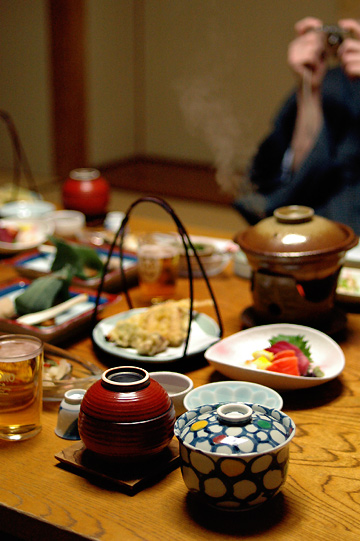 Kaiseki dinner at an onsen ryokan, Nagano; onsen hot springs and traditional Japanese-style ryokan inns are such a must if you visit Japan in the winter, so it was great that we got to squeeze it in! You were literally cooked in the onsen as our dinner were being cooked... and some ice-cold beer must certainly have helped. 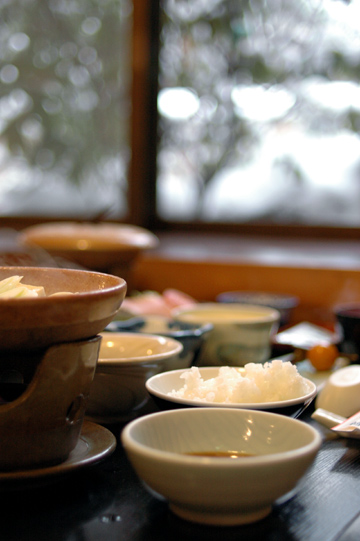 Breakfast at the ryokan, Nagano; the following morning we had snow-white yudofu on the breakfast table, and the real white snow outside the window... it was the first snowfall I'd really seen this winter, and the first real snow you said you'd seen in a long time. 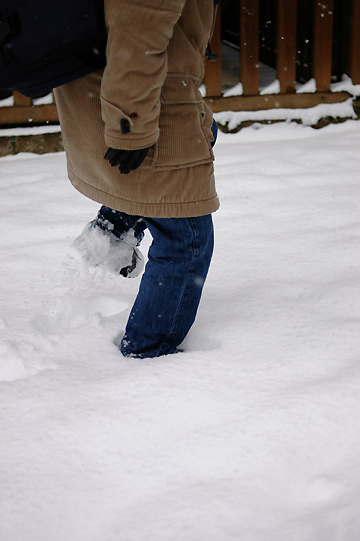 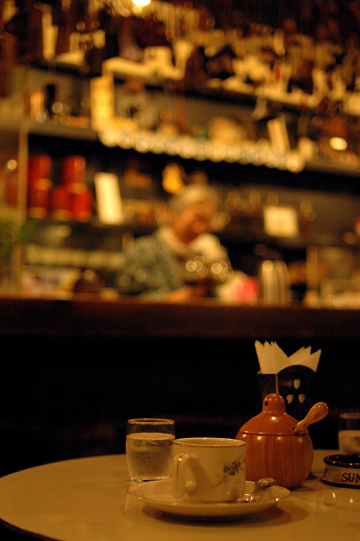 Coffee at an old coffee shop, Nagano; after some walk and drive around in the snowy afternoon, my mom took us to one coffee shop that they like. Small and old but quiet and friendly, the place was like a good old pub, you said... and you were probably quite right. It just celebrated its 50th anniversary last year, and from every small thing you find in the small place, you could tell that this must indeed have been well loved by many people for many years. 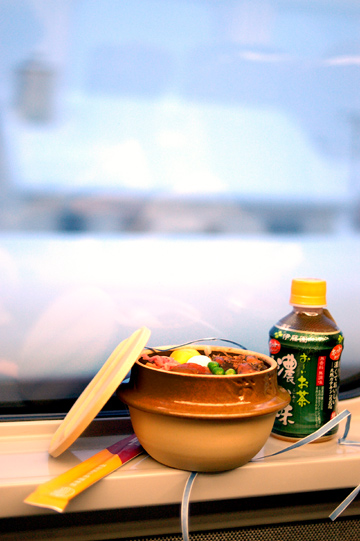 Toge-no Kamameshi on the Nagano Shinkansen train; in my book, this is the ultimate ekiben. I like kamameshi or earthen pot-cooked flavored rice dishes in general, but there is something really nostalgic about this particular one, which may perhaps have to do with the fact that this was what I'd always look forward to on our rare rail trip to Nagano as a kid, when we'd buy ours either at a train station along the way or on the train.

I hadn't had it myself in ages, and it actually tasted better than I'd thought it would... you know, childhood memories tend to get romanticized over years, but I was pleasantly amazed by an exception like this. From what they say on the shop website (in Japanese), by the way, the pot do seem to go into the oven safely as well as on stovetop... it might actually be a perfect way to cook your rice at home! 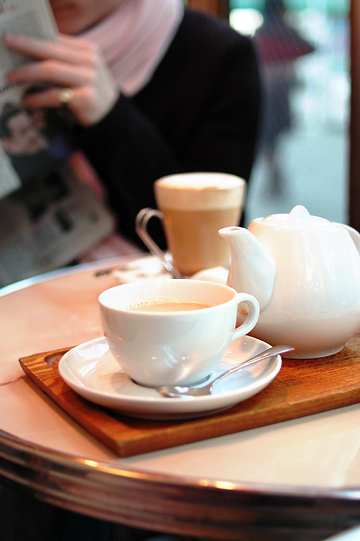 Tea & coffee break at a cafe, Tokyo; and it was your last day in here, spent walking, shopping, and generally taking it easy.

Your other discoveries foodwise this time around included onigiri or rice balls, nikuman or steamed meat buns, miso soups, and apparently, yoshi-gyu, or Yoshinoya's gyudon beef bowls. You even seemed okay with umeboshi pickles, green tea (not matcha sweets though), and sashimi and sushi... who would have imagined half a year ago that you'd even touch raw fish?

And as much as I appreciate that you were brave and polite enough to try most of the things served in front of you, I know there were certain things you didn't care for, and one thing in particular even disgusted you by a mere look of it. And I wouldn't tell you exactly what it was or how it usually come by in other dishes, because, like you kept saying, "if you don't tell me what it is, I'll eat it" (which was why I eventually stopped giving you explanations of the food you were eating); so next time you are here, chances are that you might be eating it without even knowing... and chances are that you might even like it. (Don't look that horrified.) 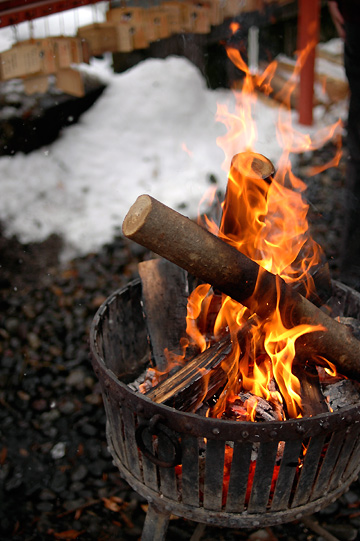 We've got another snow forecasted for this weekend over here. I haven't really seen snow in Tokyo yet, but it's certainly been a rather cold one so far. I've heard you haven't had snow yet over there... well you at least saw some "proper" snow while in here! Keep yourself warm and cozy, and enjoy your Pocky. Thanks for coming over, and hope we still have something you find worth coming all the way here for (maybe not in the middle of summer though, but well, if you ask for it....)
posted by chika at: 2/08/2008 03:33:00 AM

oh man, in my next life, can i be your companion and will you take me around too? ;) lucky, lucky person!

Wow, that was a nice trip I had to Japan, courtesy of your post. Very nice pictures! I think I fell in love with that delightful circe & dot chawanmushi cup at the ryokan.

These photos make me hungry! They also make me wish for snow (we got just a bit of it here last night). I don't know much about Japanese food, beyond sushi (and I'm a fan there) but this post will inspire me to expand my palate, for sure. What an enviable trip! Thanks for sharing it.

what gorgeous gorgeous photos! I felt like I was there :) Brilliant!!

hello all, thanks a lot for leaving a comment...

santos - you don't have to wait until your next life... when you come over next time I'll take you around! although, it would be more like you taking me around... (I really haven't travelled around in Japan...)

domesticshorthair - yeah pretty one :) that had some vegetables and seafood.