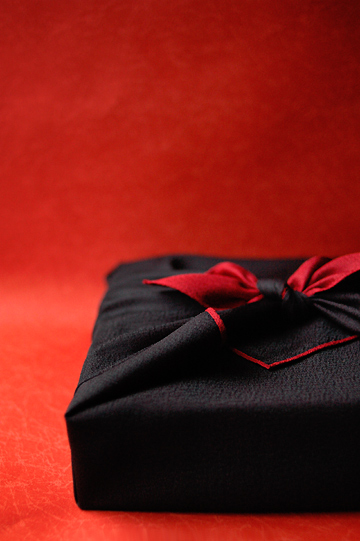 Well I assume the Christmas and New Year holiday season is pretty much gone for many people. Or perhaps some of you might be getting ready for a New Year if you celebrate Chinese New Year, which comes up at the end of January/beggining of February. Here, as we celebrate a New Year big time at the beggining of January, we are slowly struggling to recover from the lazy holiday, back to the "normal" daily routines.

In fact, because the New Year mood is so overwhelming over here, we have to shake it off in a phased approach; although New Year holiday is officially until January 3rd and many are back in business on the 4th, a lot of people just take more days off to extend their holiday, and most schools start on the 8th or so (just in case you are jealous, we don't have Christmas days off). Plus, there still are other New Year-related events on our calendar, such as the day you are supposed to eat a certain type of food (herbed rice porridge, to be precise) to rest your tired stomach, the day you are supposed to put your New Year decorations away, and so on. And we have a three-day weekend in the middle of the month with the second Monday of January being a public holiday. When all these are done, well, we finally give in: OK, let's face it... the New Year time is over. A big sigh.

So we are right in the process of letting it go at the moment, and before I finally pretend to be determined that the New Year is gone, I'm sharing a bit of what we had for the New Year: 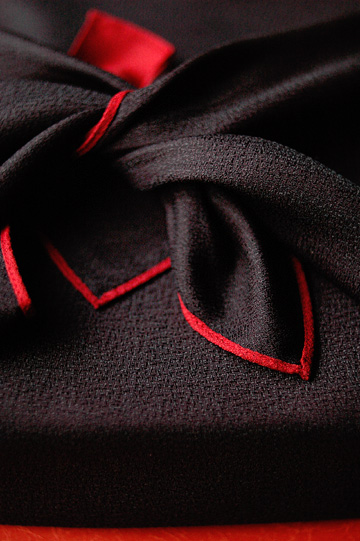 One of the biggest New Year traditions we have in terms of food is osechi, or a set of dozens of different dishes each representing or symbolizing something auspicious. Traditionally you'd make them yourself at home at the end of the year to prepare for a New Year, and I'm sure many people still do so, but even more people are just buying theirs at a store, either by individual dish or in a whole, full-blown three-tiered box.

Now that I said we celebrate a New Year big time, it doesn't necessarily mean we at our family observe every traditions and customs very closely; rather, we don't really. And osechi quite frankly must be one of those Japanese New Year traditions that we never really do. We don't make them, nor buy them. We just don't eat them, apart from a certain few of dishes that usually make a part of a full osechi set.

So this must have been the first year I ever bought an osechi box myself... even had to order one a couple of months in advance!

It came beautifully wrapped up in a cloth, inside of which there was a handwritten kind of New Year message that vaguely read "hatsu-yume (the first dream of the year) 2008", or so I guessed; I can't be too sure though, as the calligraphy is rather too artful to actually read....

So what was the first dream of the year anyways? 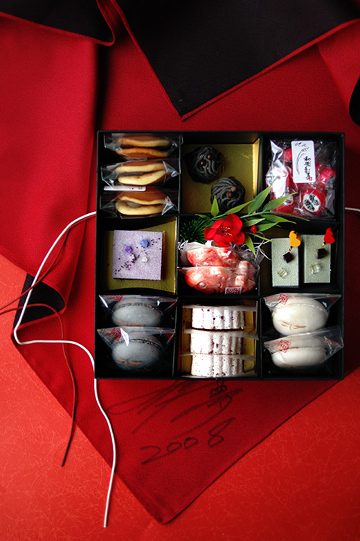 How about an osechi that consists of candies, cakes, and chocolates?

Although I can't quite remember what my own hatsu-yume was about (or if I had a dream at all that night, for that matter), I found it quite impressive the way they put the set together. It was from Warasuku Beniya, a shop owned by a renowned Japanese French pastry chef Hironobu Tsujiguchi who has an array of cake and chocolate shops under his name in Tokyo and elsewhere. Established as a reopening of the once-closed shop of Mr. Tsujiguchi's parents who were Japanese confectionery makers, Warasuku Beniya offers a mix of Japanese and Western sweets, in wagashi (traditional Japanese sweets) with a twist of French baking and French-inspired desserts using traditional Japanese ingredients.

True to such a fundamental concept of the shop as well as the spirit of real osechi, their special wagashi osechi brought together a beautiflly-presented set of East-meets-West fusion sweets, filled with Japanese New Year festive spirit. 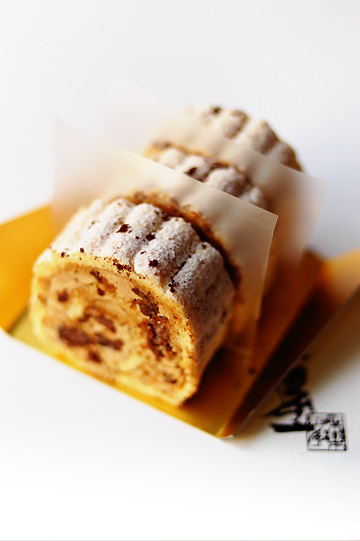 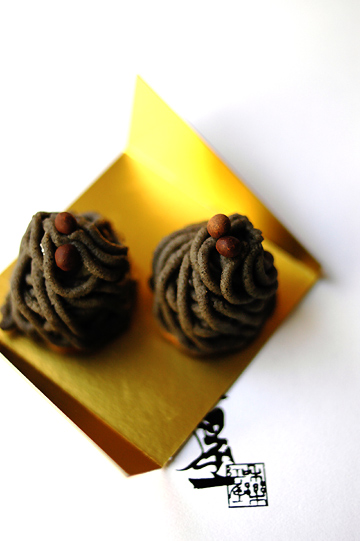 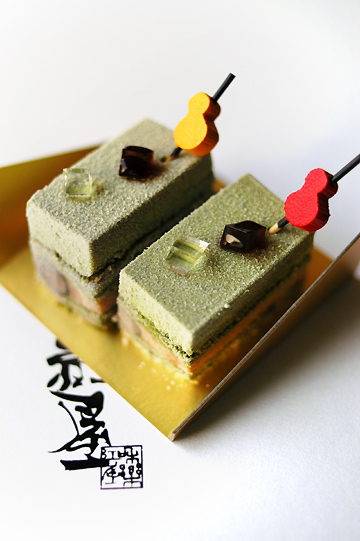 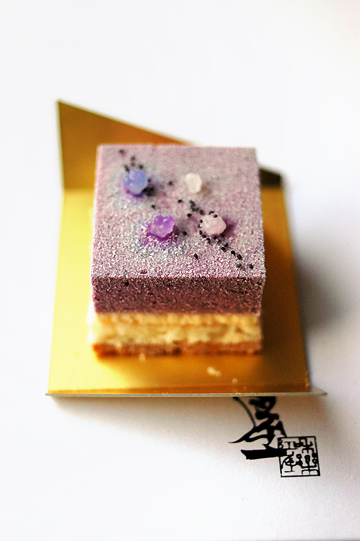 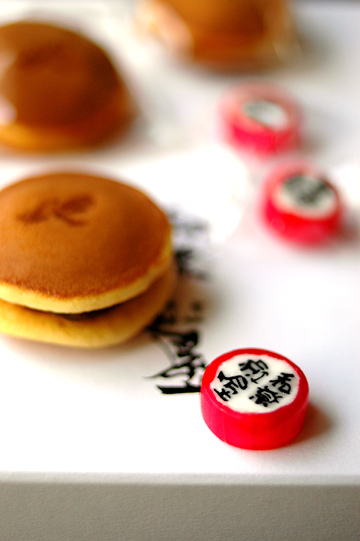 Mini dorayaki pancake sandwiches and sweet and sour plum candies: dorayaki usually comes as a size of a palm of your hand, filled with an awful lot of sweet azuki bean jam (which I loathe), but these were tiny, more or less silver dollar-size ones with a moderate amount of azuki jam, along with a sweetened chestnut and/or gyuhi (soft mochi). 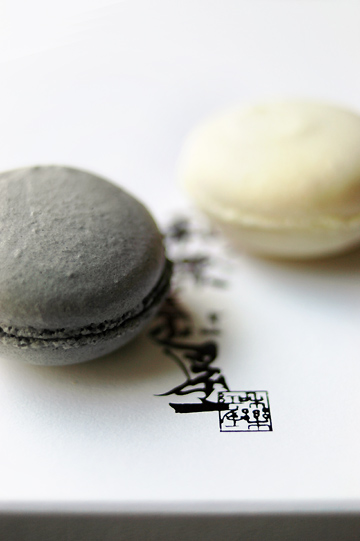 Macarons: what are macarons? Well nowadays I don't seem to be able to write a post without a reference to a Wikipedia page (this very post is a case in point), and yet the Wikipedia page on macarons has a link to one of my own blog posts, so this could perhaps mean I am giving at least something, instead of taking and just taking.

Anyways, their special macarons came in two flavors, one with yuzu and the other with a sweetened Japanese chestnut. Wonder how a yuzu macaron ended up looking blackish? Well it could potentially make a long story, so I'll just try and add an explanation only if anyone is interested. 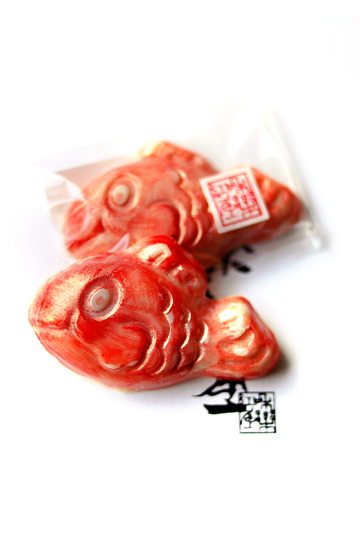 And finally, chocolate red sea breams: sea bream, or tai in Japanese, is another such auspicious food item that often appears on a Japanese New Year festive table. These small molded fish were made of strawberry-flavored white chocolate with puffed rice, coated in another layer of white chocolate and finished in pearly red.

Now I'm not sure if these altogether look a small portion or not, but almost the whole set went down in a matter of minutes among three of us as each pieces were quite small. And yet, they were quite sweet as well, just like traditioal wagashi usually are... so it may have been a good thing that the set came in a single layer, rather than a three-tiered box like a real osechi set.


Now it is more than a week ago that we actually ate our sweet osechi, and yesterday was the day for us to put away our kagami mochi, another important piece of Japanese New Year decolations, and make the mochi rice cake into shiruko, which we did. Personally, this is the event that really brings me down to earth, making me feel that the New Year time actually is over for real.

Then again, while the New Year holiday might be over (okay, it is over), the year itself - the year of 2008 - actually is only at its beginning, isn't it? So stop moaning and get a life, me - we have a whole year to enjoy until the next New Year is around!

Such a feast for the eye, thank you for sharing! I'll have to remember to order an osechi set from one of the Japanese bakeries in Paris next year...
Akemashite omedetô gozaimasu Chika-san!

Happy New Year!! All the pictures are great!

so pretty. I would have found it really hard to wolf it all down =)

In the last few months, you may remember receiving an email invitation to become a part of the Foodbuzz Featured Publisher Program. With all the recipe-writing and food photography to be completed, we know emails can easily get lost in the shuffle, so Foodbuzz would like to re-extend our offer of inviting you to be a part of our food blogger network. I would love to send you more details about the program, so if you are interested, please email me at Shannon@foodbuzz.com.

I also wanted to say your photos are absolutely beautiful--lighting, clarity, everything perfect. And yes, I am still working off that holiday hangover as well. =)

beautiful pictures! didn't get around to read the text, your photos stole my attention!

Belated Happy New Year, Chika-san.
And thank you for the B-E-A-U-T-I-F-U-L photos! They certainly made the start of the new year a great one.

I wish I could take photos like you do...!! No one else would be able to take such breathtaking and sexy shots of furoshiki. I mean it!

as C&Z said it's such a feast for the eye. thanks

Gorgeous desserts! I especially like the purple sweet potato and coconut cake! Beautiful!

Hello all, thanks for dropping by and leaving New Year greetings... I hope you all had a great New Year and the first month of the year!

clotilde - fingers crossed they have pastry osechi sets like this over there in Paris... if not, come over! (when are you coming over anyways? :))

Shannon - thanks for the emails and comment... sorry for not having been able to work on it yet.

obachan - yeah but furoshikis are sexy, aren't they? ;)

this is gorgeousness embodified. it looks fantastic!! i chanced upon your site and now I'm never looking back ;)