tastes of the Big Island that I never tasted 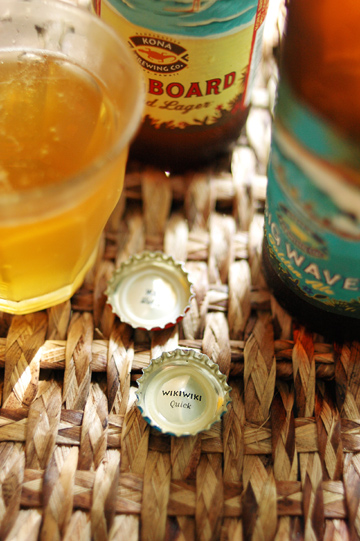 On a random day early this month when we were blessed with the height of summer heat, I was shopping at a nearby supermarket and strode into the beer aisle. I already had a few things in my mind, but there something caught my eyes. Bearing labels with some pictures of sea on the bottle, they were named Longboard and Big Wave, which instantly evoked an image of Hawaii. To me anyways, and I'd say they did a good job there, as they indeed were from Hawaii. Kona, on the Big Island, to be specific.

I must have spent good five minutes (or so it seemed) in front of the beer section, pondering if I should grab a few bottles of these Kona Brewing Company brews. I was really tempted, yet eventually decided not to, for I already had a basket full of other shopping stuff I'd have to take home (and no, I don't go shopping by car - I bike with a backpack and a few extra shopping bags).

After a couple of days I quickly forgot about them (let's be honest, I'm not a biggest beer drinker anyway). Then, by a sweet twist of fate I happend upon not one but two blog posts that mentioned the beer in question - both bloggers are based in California by the way, and apparently Costco has the beers in stock. Lucky folks.

So, I took the whole thing quite conveniently, convinced that all these things were telling me to head back to the store and treat myself to those Hawaii beers. Well, there was no reason for me not to! So I did. 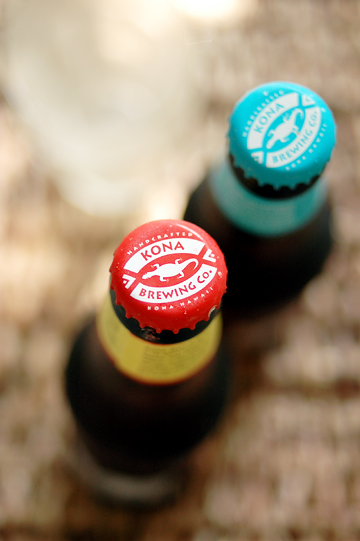 Now, as a one-time Big Islander, I had never tried or even seen these beers made in Kona. Not that I can remember. Sure, I was on the other side of the island, but I'd think some liquor shops would carry a locally-brewed beers when there aren't, like, hundred of breweries on the island? That said, I never really frequented at liquor shop, either, so I wouldn't be surprised if someone pointed out that I indeed saw them while in Hawaii.

What I found more interesting was the fact that there seem to be quite a few places in Japan where you can have a sip of the beers. Of course, Japanese people love Hawaii - some are even obsessed with it -, so it may be hardly surprising if I find some Hawaii beer at a Hawaiian food restaurant/cafe or maybe a large liquor shop. 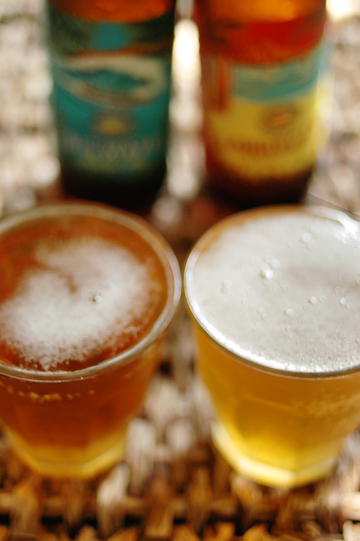 Excuse me for a hardly appetizing snap of beer - it's not that I waited five minutes to shoot until the beers were gone flat! Well if you are patient enough to ignore the absence of proper head on beer, the one on the left is a golden ale called Big Wave, and the other one on the right is a lager called Longboard. They tasted like - um - a light ale and a lager, respectively. Smooth, refreshing, rather pleasant to drink. That's about as much as I can elaborate on beer tasting - I liked them though! 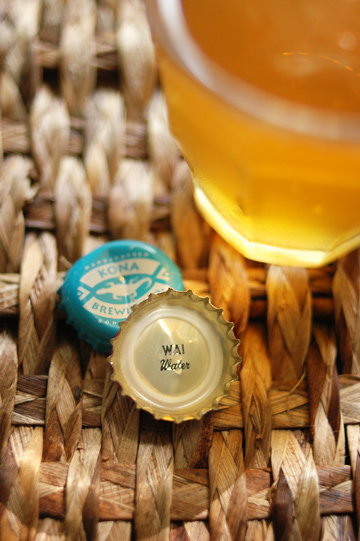 (Another thing I found neat about the beers, beside the fun names and funky labels, was that they teach you some Hawaiian vocabulary inside the bottle cap!)


Now I would have been quite happy just sipping my little Hawaiian treats, but it just occurred to me as I put my hand on the beers at the store; what can I do with them?


I haven't been able to go through here on this blog, but I have been a bit of ice-cream and sorbet freak this summer. I must have churned out a dozen of frozen desserts this month. I will come back with more details on them, but for now, just one word (three, actually): beer ice cream.

Don't go yuck! about me, there really is such thing as beer ice cream. One recipe in case can be found in Pure Dessert by Alice Medrich (Artisan, 2007), from which I tried more than a few ice-cream recipes. This fabulous book features Guinness ice cream, which I was going to try in the beginning - then as I was reaching to the Hawaii beers at the store I suddenly remembered that Medrich noted that you can substitute the stout with another type of beer. Why not some Hawaiian beer ice cream to beat the heat? Geneus, I told myself in my head, and popped two bottle each of the two beers in my cart.

And on the following day in a sunny, warm afternoon, I opened two bottles, snapped a few shots, and measured out what I'd need for my ice cream, then shared what's left with my sister, who happens to love both Hawaii and beer. 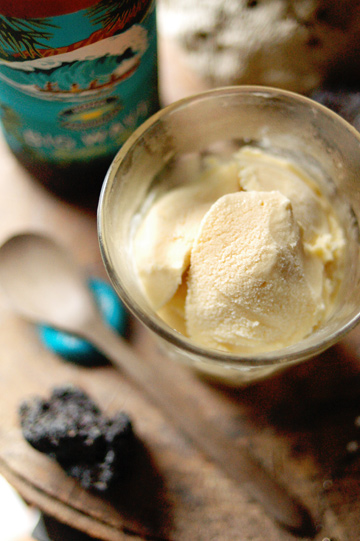 For the ice cream, I used Big Wave, as the label claims it has slight sweetness which I thought would be good in ice cream. Turned out, it might have been a tad bit too bitter a side - just a little - but otherwise the ice cream was lovely. One thing I learned is that the taste of beer really does shine through, so you really should use the one you like to drink; Medrich suggests in the book that you should avoid Indian Pale Ales though - are golden ales somewhat like them? I just don't know too much about beers.

Now the book has another recipe that uses beer - namely, beer granita. While beer ice cream was appealing to me, I wasn't too sure about beer granita, thinking, it's basically slushy beer, like the one you'd sometimes get when you have popped a bottle in the freezer trying to shortcut the chilling, only to forget about it until the beer is frozen halfway, on the brink of exploding in the freezer (if it has not happend already)? Mmm. Then, something the author says in the recipe changed my mind - in a good way. She offers that the beer granita should make a good accompaniment/topping to vanilla ice cream, which sounded pretty darn good. So I took some of the lager for the granita, which really is simply a frozen beer with a little bit of sugar (and water). 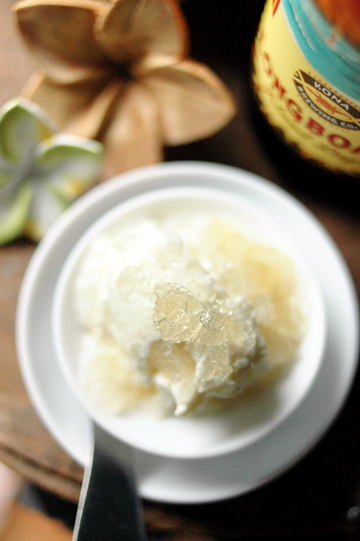 And you know what, I was so glad I had changed my mind. When I tasted the granita out of the container, I was like, "well, this really is a frozen beer". Yet once flaked on top of rich and creamy ice cream, it really shone. The bitterness of the beer perfectly cut through the sweetness and richness of the ice cream, without losing its presence.

One thing about the recipe I didn't follow was that I didn't pair it with vanilla ice cream. The book does have a recipe for it, but I instead went for another - more appealing in my view - recipe, named Heavenly Honey Ice Cream. 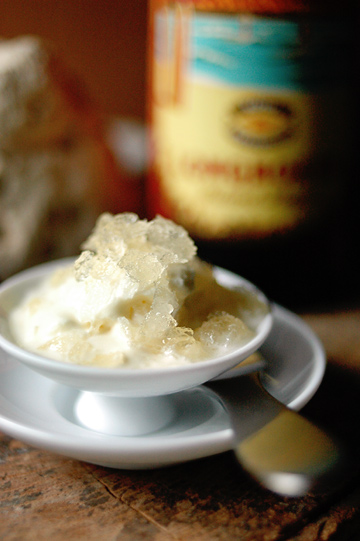 Like many other ice cream recipes in this book, this is an egg-free version that proves to be fuss-free to make. For the honey ice cream, you just warm some milk, let it cool, dissolve honey in it, mix in cream, let it rest for a while in the fridge, and churn into ice cream (in my case, I did a non-ice cream maker method). Since it is mostly made of cream, it was creamy but light, or heavenly, true to its name's sake.

There was another reason why the idea of pairing the honey ice cream with my beer granita won me over: 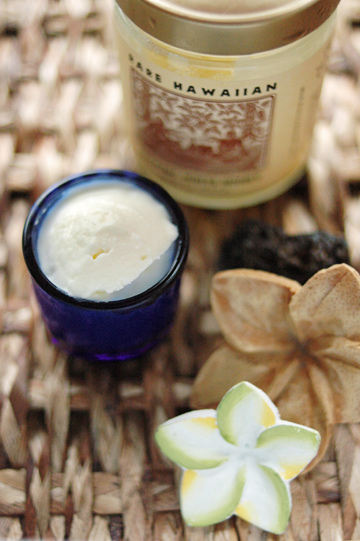 When you have a Big Island beer, why not use a Hawaiian honey to go with it? Well you might happen to know that I am sold to truely heavenly, superb Hawaiian white honeys by Volcano Island Honey, not because they are from the Big Island but they seriously are sublime. When you have only three ingredients in your honey ice cream and you are using an exceptional honey, you really can't go wrong (unless you use crap milk and/or cream, of course).


So I made myself a few Big Island-inspired desserts, none of which I actually had while living in Hawaii. But they were good enough to bring some good memory from the island, and they sure made a perfect summer treat, if nothing else. 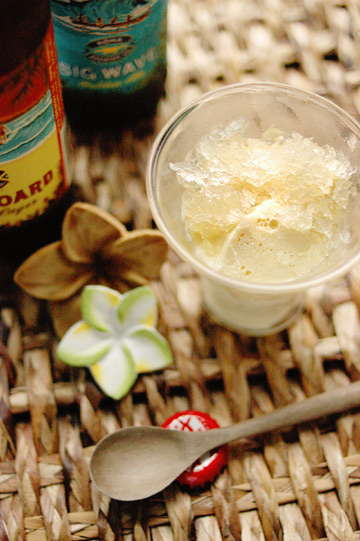 (I even threw all the three together in a glass to make it parfait!)


So if I ever have a chance to go back to the Big Island again, I would love to make a visit to their brewary and pub; a Kona coffee plantation tour would be a hit for tourists, but when you have a local brewery, you just have to get yourself down to it! 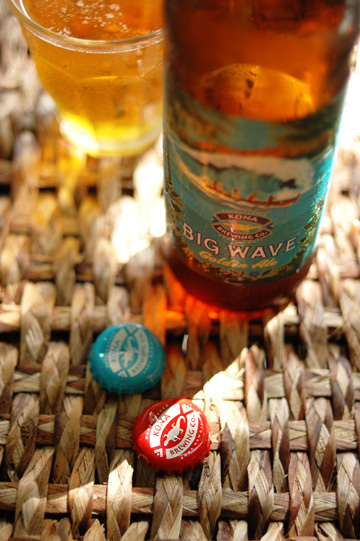 u pictures... are wonderful...

do visit my blog when u find time and leave ur comments and suggestions...
http://envittuvirundhusamayal.blogspot.com

One, that beer looks great. Secondly, that honey you talked about sounds incredible. I wish I could get some.

The beer granita looks wonderful! I want me some of that but then being a good Aussie anything beer is good by me ;)

Even though I live right in Kona, hi Chika, I'm not much of a beer drinker so I don't drink the brews from Kona Brewing Company often. Though I must admit every St. Patrick's Day I substitute Kona Pipeline Porter for the Guinness in the drink 'Irish Car Bomb' and call it a Kona Pipe Bomb.

- manger la ville - I can't get them in Tokyo, either. about time to make a buying trip to Hawaii...

spankthecook - you guys got some great beers down there indeed!

baron - what a cracking idea, Kona Pipe Bomb! I really do have to do that, too, when I finally make my visit there, St. Pat's Day or not!