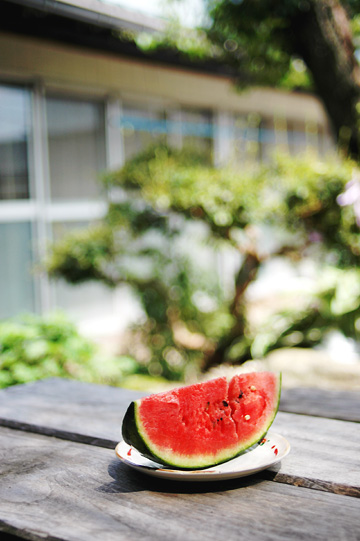 Just when we all thought the summer was over, it came back - at least during the day when the sun is out.

August was gone with the wind (well more like storms, actually), and came September with a blue sky and some lingering heat. 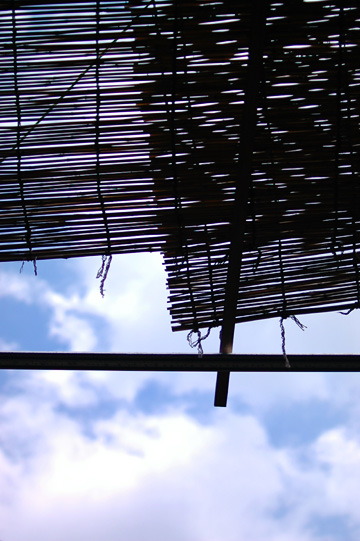 We'd had a week of heavy rain and storms, so a sight of a blue sky was a much welcome change, even with the not-so-welcome heat. 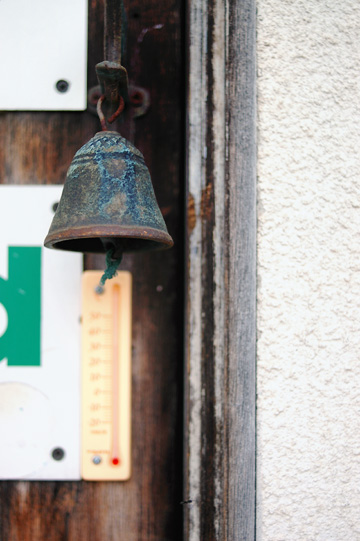 Just about midday, the outside temperature hit 85F or so - quite warm for a place up in the mountains in September.

As I arrived there, Mom raced out of the house, saying, "We've got watermelons!" 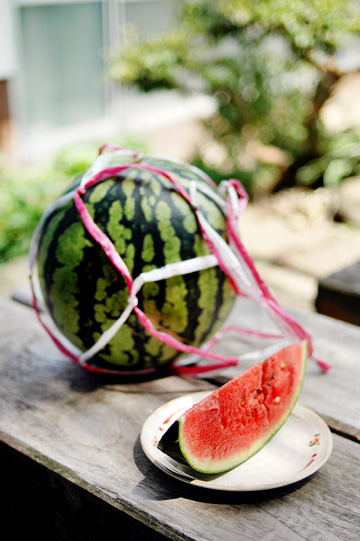 It's crazy but I somehow hadn't had watermelon all this summer - I mean, if you didn't eat it in the summer when would you?? I must have mentioned it to her before coming, and apparently she remembered it and so got some for me. I was tired and thirsty after a long trip up there, so a chilled, juicy wedge of watermelon was most welcome.

And it didn't come short of my expectation; in fact, it tasted really good, unlike those waterish, bland stuff you sometimes get from supermarkets. "This is the best watermelon I've had this summer", I gave it a rave, to a bit of surprise to my mother; "But you said you hadn't had any this summer?" "No, I hadn't", I replied with a grin. "Oh, well, yeah, sure," she laughed and disappeared into the kitchen. Sure, it may have been the only watermelon I'd had this summer, but quite possibly it could still have been the best even if I had had some before - it was that good, indeed. Besides, seeing a large, whole watermelon sitting around in the house reminded me so much of my childhood, when these funky-looking squashes would be our favorite snack/dessert during the summer break; as I grew older and started living away from my parents, a whole watermelon became something that I wouldn't reach my hand for, as they would typically be too large for my small household and fridge.

From the kitchen, Mother declared out loud that today's lunch would be tempura. Yay! 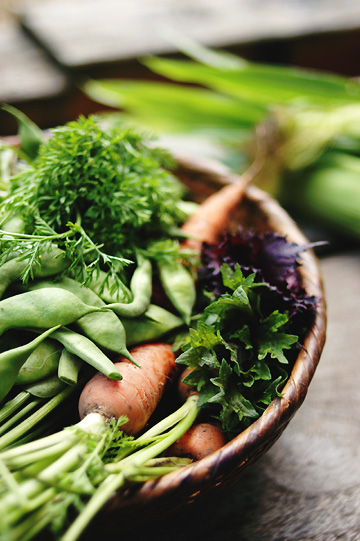 ... And as it turned out, we had to start with obtaining our ingredients. Needs must, as they say, and off we went - to their vegetable patch right across the street, no less. How cool is that? 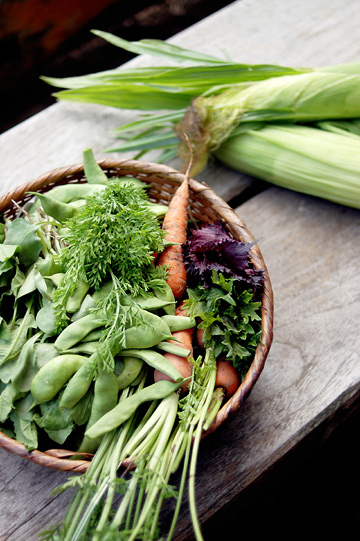 As we came back with just a small basketful enough for three of us there, someone came around and left us some more vegetables, all home-grown and just-picked, too.

And all went to the kitchen, came out deep-fried, piping hot: 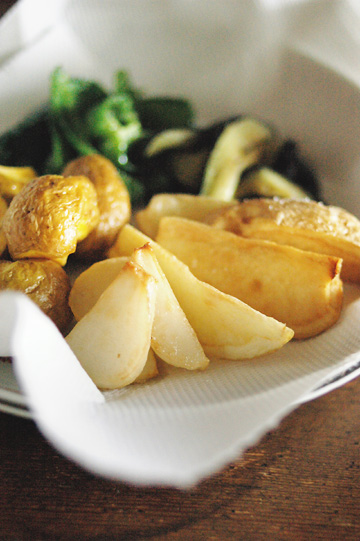 A few different types of potatoes, small and large, along with garlic cloves, green peppers, and egg plants... 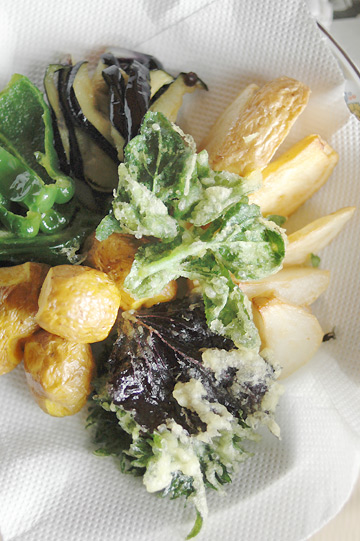 ... Some local greens and shiso leaves, purple and green... 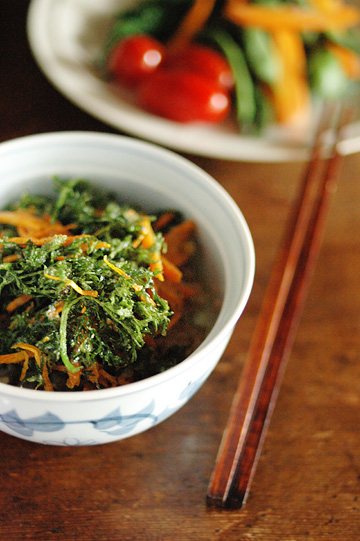 ... And my biggest favorite of the day: carrot leaves (and um, carrot) tempura. You just can't expect carrots to come with their leaves left on at regular supermarkets these days, let alone in such an ultra-fresh state, so it was a real treat - especially when I never do tempura, or any deep-frying for that matter, by myself. I had mine on rice in a bowl, dipped in a light tempura sauce. Some might think this is nothing but a simple - humble, even - meal, but to me, it was a most fulfilling, enriching food experience, to celebrate seasonal bounties in a freshest possible way. And the food was an epitome of summer - even if the summer itself was about to give way to the autumn.

So I'm in up in Nagano again, secluding myself deep in the mountains (well almost). It had been about three months since I was last here, and my initial plan was to come up here, relatively cooler and definitely less humid, in the height of the heat to stay away from the dreadful Tokyo summer. Then I kept missing a chance to travel out of town, until it got suddenly cooler and I realized the summer - whether to enjoy or to escape from - was close to the end. So I am lucky that it did get a little more summer-like again, so I can enjoy some pleasant summery weather here, in place of the muggy Tokyo.

That said, we do see small signs of autumn here and there... 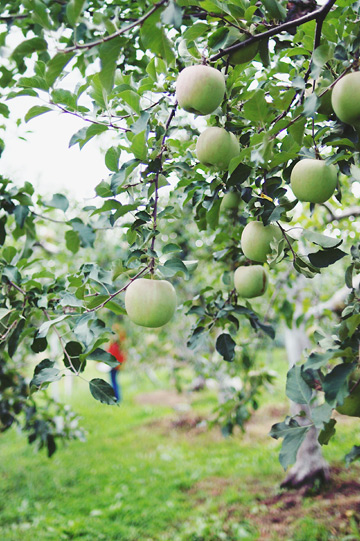 When my mom and I were out to get our vegetables for lunch, we walked through their apple trees, already loaded with the fruits. 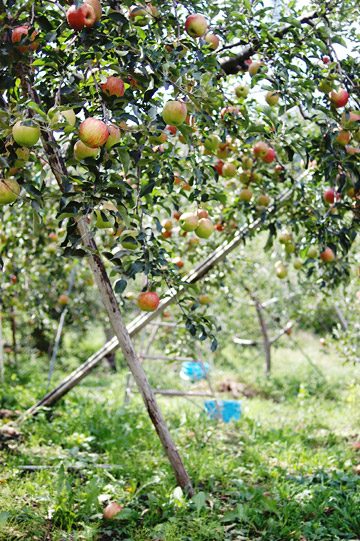 Some of the apples looked as if almost ripe. In fact, they'd just harvested their first crop of apples this year. The biggest variety grown in this area, namely Fuji, will be ready much later in the year, around in November. Untill then, the fruits will stay on the tree, slowly ripening and loading up sweetness. Come to think of it, I didn't really eat apples last year - certainly not ones from here. Can't wait to have a bite of the first Fuji of the year!

Now, it wasn't for the apples that I came out of the house following my mom... (nor for the lunch ingredients, either, as we weren't having more vegetable than she could hold by herself). 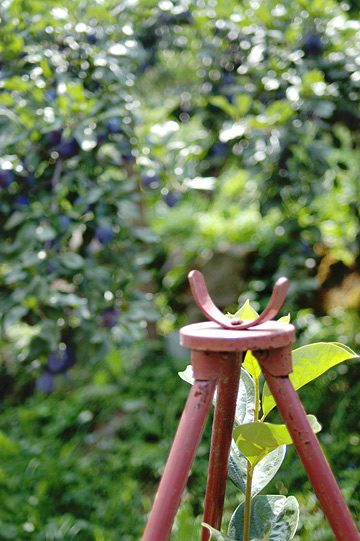 It was, for them: 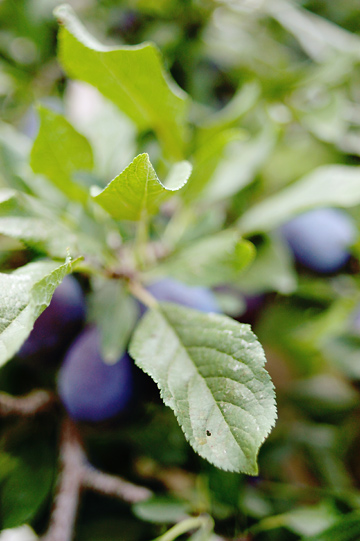 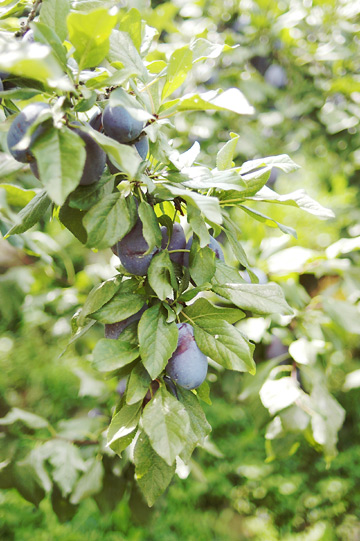 Prune plums - or, Italian or French plums, depending on where you are coming from. Out of every and all plum varieties around, this could be my biggest favorite, one that makes me excited every year when I spot them (usually at the store) for the first time in the season, toward the end of August. I enjoy them dried year around (maybe more in colder months than otherwise), but there is something about this dark-skined, tart and juicy oval fruit that makes me feel so obsessed.

I'd known that they have prune plum trees here, and they had even sent some before if I was in Tokyo during their short harvest time, but this was my very first time seeing the plums on the tree, ripe and ready. I had secretly looking forward to it before coming to Nagano this time, and seeing them in front of me was a thrill. 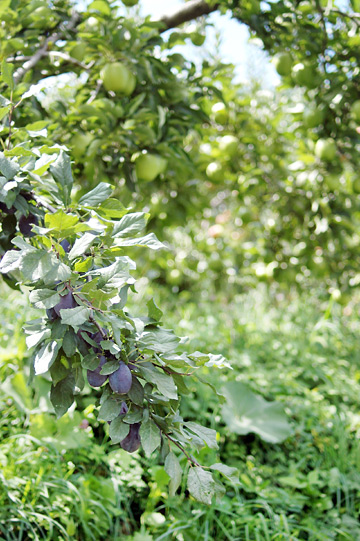 That day I didn't pick any, as I was told that they might be slightly underripe, but did a week later - and now I'm busy snacking and baking. With a large basketful of my crop in the kitchen and still loads left on the tree, I now truly understand how people must feel like when they have a flood of fruit or vegetable crop from their garden - a mixed feeling of being excited, blessed, and yet overwhelmed... 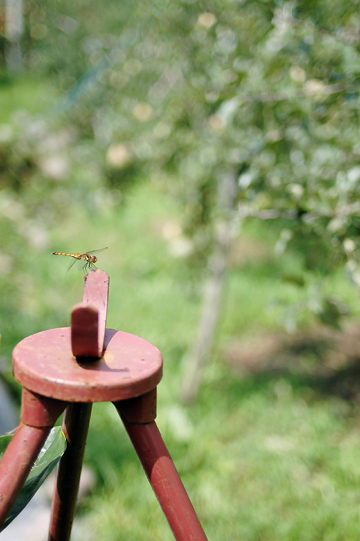 This was about a week ago, and it's been quite warm during the day and chilly in the evening and early morning. I'm not really over my summer favorites such as peaches, tomatoes, zucchini, ice cream, etc., but am nevertheless excited to see the first waves of grapes, pears, figs, pumpkins, and other autumn bounties. 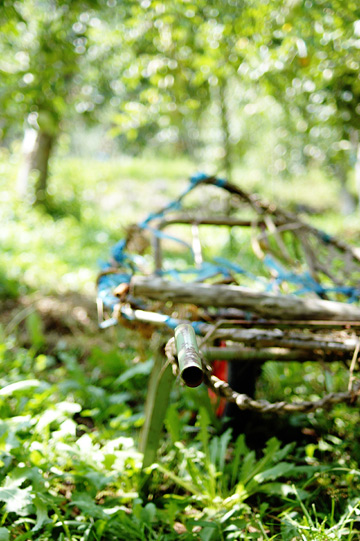 So I hope I'll share some of the things I encounter here in the mountainous countryside, in what arguably is one of the most beautiful times of a year. 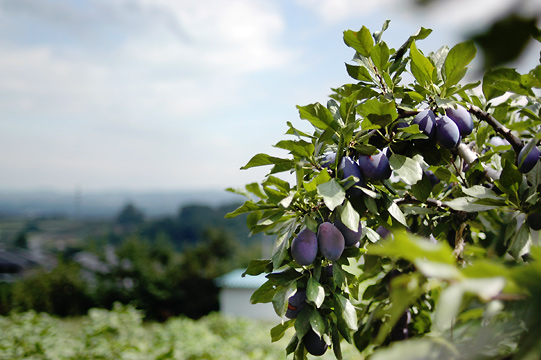 Thank you for posting such beautiful experiences and pictures :)

As always, everything looks beautiful. I was holding my breath while reading this entry.
Beautifully written, as always.

Your photography is absolutely stunning. I love attention to detail.

You are a wonderful girl.

Oh, I didn't know that carrot leaves are edible. How wonderful! I'll buy them with the leaves on from now. Your posts make me long for Japan. Thank you!

could not help admiring those beautiful close up shots of the veg. Nicely taken and also apple farm. Feel relax looking at them.