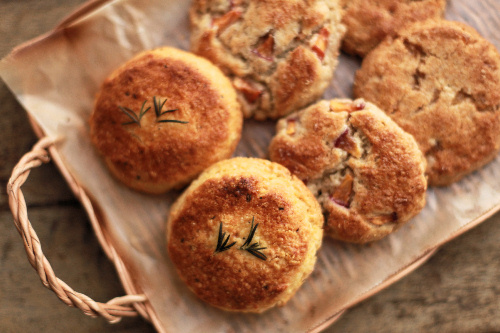 Scones for breakfast, for every day of the week...


It all started with a couple of jars of home-made jams that I had around. Not really a jam person, I don't consume jams of any kind too much, and I was pondering over possible ways to use them. Then one of the things that occurred to me was scones; not by smearing the halves of baked scones with jam, but rather filling the dough with it and then bake - kind of like these. 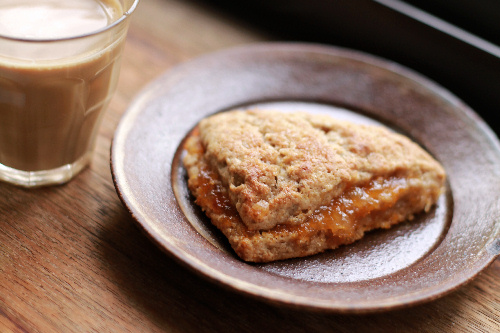 Since I'd flavored the jam (peach and ume, if you wondered) with ginger, I went for a ginger scone recipe, and settled on this one.


I was pleased with my jam-filled ginger scones, but if I tell you the truth, the first ginger scone recipe that came to my mind was another one - by Nancy Silverton, the head baker at La Brea Bakery. 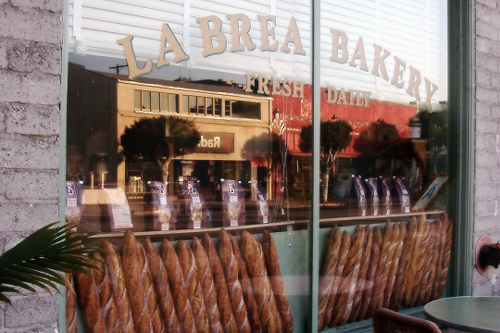 I was first introduced to the breads and pastries of this well-respected bakery back in 2004 when I was in Hawaii, by one of my very good friends who lived (and still lives) in Los Angeles. She is extremely nice to send me care packages every now and then, all filled with delicious goodies, and one of her packages contained selected pastries from La Brea Bakery. First bite (and many more to follow), I fell hard for them - especially their ginger and rosemary scones.


So when I bought her pastries book, Nancy Silverton's Pastries from the La Brea Bakery (Villard, 2000) soon afterward, I was thrilled to find the recipe for ginger scone - and though at that time I was not sure, that for rosemary scones.


Anyhow, while I used another recipe for ginger scones than Nancy Silverton's this time, I was still reminded of how delicious La Brea scones had been, and couldn't help but realize that I had not eaten them for quite a while now. This notion promptly made me crave for - almost obsessed with - their rosemary scones, pretty badly. 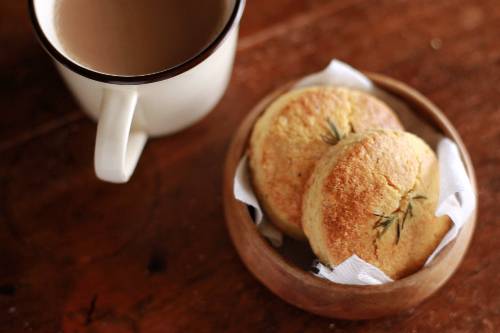 So in the following morning, I did myself a favor and baked a batch of rosemary scones. This only came after a bit of confusion about the recipe had been cleared, however; the recipe is called "Rosemary Corncakes" in the book, and when I first saw it (and made the cakes), I thought it was NOT the recipe for the rosemary scones they sold at the bakery. For one thing, it was not called "scones". But more importantly (to me), the recipe seemed to use way more cornmeal than I would taste in the scones from the bakery - or at least so I thought.


But as I was chatting (online) with my long-time blogger pal Santos, she indicated that the "corncake" recipe in the book should be for the "scones" from the bakery. If nothing else, I hadn't eaten these particular scones, either the "real" thing or ones I'd bake at home, for such a long time I could hardly remember exactly how they had tasted like. So it was about time I'd whip some up (and go to Los Angeles - but that's another story). 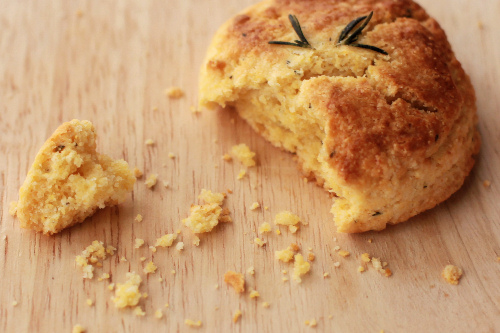 And while I still couldn't have the real stuff (just yet), baking these little cheerfully yellow morsels must have been the next best thing, and it certainly satisfied my craving with the scones. (The real La Brea Bakery rosemary scones, by the way, are nothing but "little"; they are, in fact, huge. But I happen to use extremely small oven, so I tend to make my baked goods fairly small. Just in case anyone wondered.)


And now that I had my go-to rosemary scones, I just had to have my go-to ginger scones, might as well. Two batches of ginger scones within just a few days were totally fine by me.

If you excuse these flat, un-scone-like scones that may look more like thick cookies, my ginger scones were beyond delicious - soft and crumbly, sweet and spicy. And the good news is, you can find the recipe online and make your own now! I replaced half the flour with whole wheat (pastry) flour, but they should come excellent either way.


So I might have already been baking a lot of scones in a rather short period of time at this point, there was something else that I had set my mind on for a while - which happened to be, alas, scones; nectarine scones to be precise. 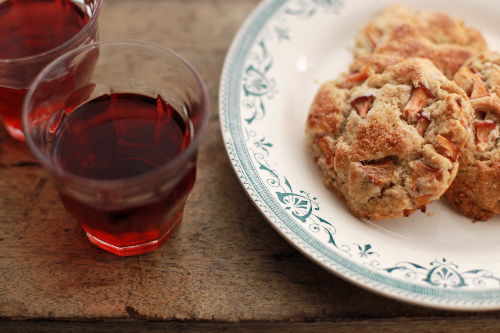 Well, strictly speaking, these are called "shortcakes" in the recipe, but to my eyes they are perfectly scones. Whatever you like to call them, these were very simple-to-make, just like any good scones should be... and sweet with chunks of fresh fruits. I subbed half of the flour with (wholewheat) rye flour, and it seemed to give the scones a bit of tang, as well as a touch darker shade.


Now I normally make pastries in small batches (usually half, or even one third, of a recipe), and I halved the recipe for all of these scones. Still, I'd bake only half my (already halved) batch at a time, and kept the remaining half in the fridge to treat myself on the following day or so to a morning with freshly-baked scones without having to make the dough from scratch, which is excellent. 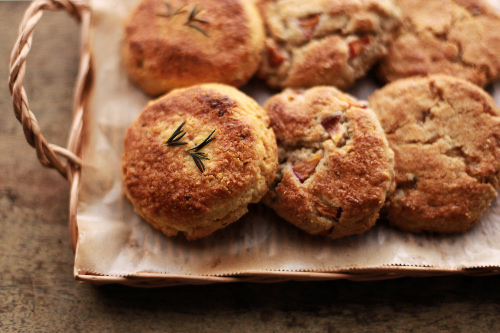 On one particularly good day, we managed to have three different types of scones, all at once - two of which came from the fridge and went straight to the oven. Bliss.


And before I sign off, I'm throwing another thing into this post - another batch of scones, that is. We went for blueberry picking over the weekend (for the second time in this summer!), and our fridge and freezer were on the verge of exploding with blueberries. 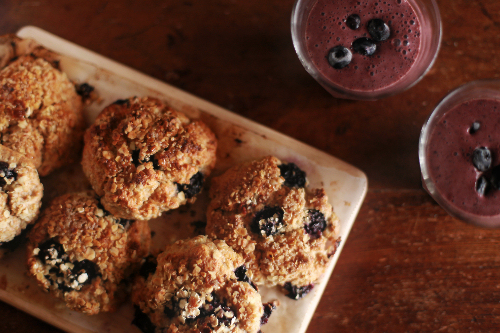 So there came these berry-dotted, oat-flecked blueberry oat scones (recipe here). These were slightly lighter than many others and barely sweet - even I thought that I might have liked them a little sweeter at first bite, but I came to like them better with subsequent bites, and I now think they are just fine without any more sugar added. But that's up to you.


So these five recipes of scones were made (and eaten) within the period of a week or so, and you might think I seem to have been acting as if I had known nothing else to make than scones, but too many scones isn't necessarily a bad thing - except maybe for your waistline. 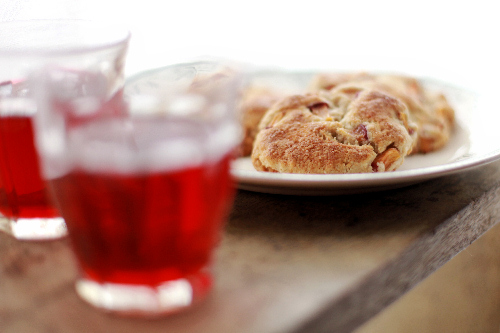 rosemary corncakes. how interesting... i'd love to try making it, would u mind sharing the recipe? :)

Swee San - they are excellent and i'd love you to try it, but unfortunately the recipe is not mine to share here. you might have to find the book - sorry!

Those rosemary scones look absolutely gorgeous! I have some fresh rosemary growing out on my patio, I will have to put it to use for these :)

good stuff. i love rosemary in everything!

these look exquisite!
Unfortunately I live a jam-free life. I have no choice.
Jam + a spoon = I'm a goner.
But I love your pictures
So far I'm managing...

these look wonderful! and lovely photographs. I am a huge fan of anything rosemary. And all things ginger. But I have never had them together before. I am sure these are delicious and right up my alley!

I adore scones! These all sound delicious. Your photos are beautiful too!

Lovely photos on your blog...yum!

Hi! I love your blog - - I recently came across it through Aran from Cannelle et Vanille. I have a semi-random question: if I reimburse you for the costs and shipping could you send me some cherry blossom extract? I've been trying to learn to bake and I'm following recipes I find on Aran's blog but can't for the life of me find cherry blossom extract in stores or online. Anyway, if this is something you could do I would be soo greatly appreciative!

Beautiful photos- your making me hungry!