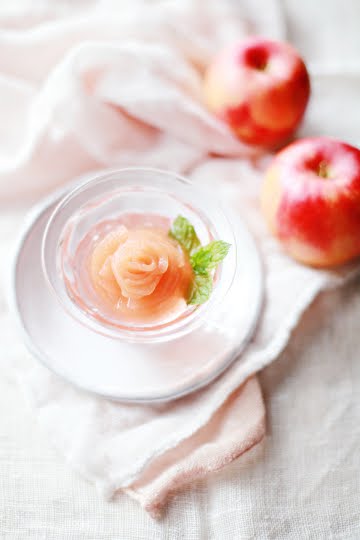 After spending the whole summer indulging myself in a bounty of fresh summer fruits, I was still not quite ready for apples. Sure, I saw the season's first apples as early as mid August, but I like them the best in late fall, and usually pass up those early-autumn varieties. And quite frankly, I wasn't done with summer fruits just yet. After all, in just a few months there will be few fresh fruits available but apples at the stores, so why hurry now?


Yet last week or so at a local green market, I found something that intrigued me, and it happened to be apples. 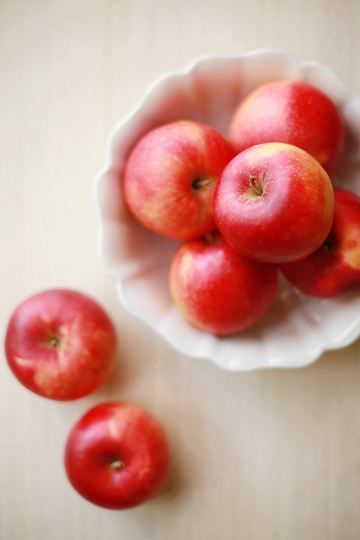 The tag read "Rose Husk", and according the leaflet that came with them, it is a variety of apples that smell like a rose. And sure enough, when I sniffed the lot of them, I did smell rose - or something close. They smelled like apples, of course, but there was definitely really sweet and floral note to it.


The leaflet suggested that you put one of those apples in a room or a car, as if they are a room/car fragrance. I could easily imagine that. What was more interesting to me was this little note that said "they are OK to eat"; what did they mean, exactly, by this? We guessed that they would be not inedible but not palatable, but not certain. Since nobody at the market could answer our question as they had never tried them either ("they are a new variety and just arrived today", they said), I decided to find it out by myself and took a case home with me.


And quick googling taught me that Rose Husk is a relatively new cultivar developed and marketed as ornamental apples, and perfectly edible raw - unlike, say, crab apples. That said, they weren't exactly tasty; let's just say I wouldn't bother to eat them raw, especially when there are plenty of other apples that taste great cooked or uncooked. Yes, "they are OK to eat". Precisely. 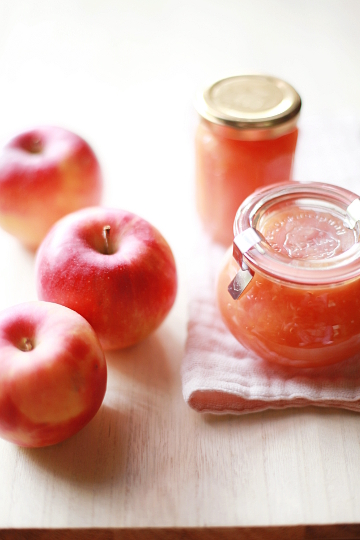 So after enjoying the sweet smell of them in the room for a few days, I set out to make jam. I largely followed this recipe (in Japanese), which is a quite simple one; you make your jam with apples peeled, but add the peels to the pan to tint the jam pink. Well, my jam turned out more orange than pink, and perhaps not exactly a typical sort of pink that you'd associate with roses, but still pretty. And no, it didn't smell so much of roses, unfortunately, but smelled nice still.


Another question: would they still smell like a rose when soaked in booze? 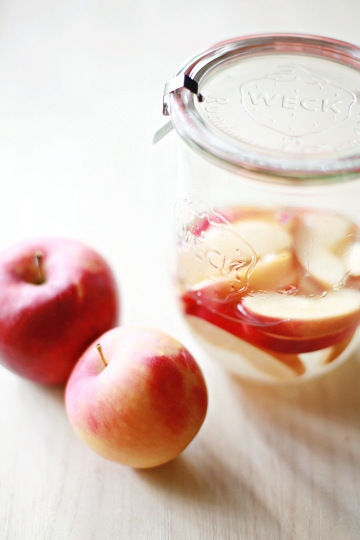 Well, my expectations weren't that high, but I still gave it a go - apple liqueur, that is. As a matter of fact, I wasn't too impressed with the results of my last year's batch of homemade apple liqueur made with apples, brandy and cinnamon and wasn't sure if I'd want to do it again. But this experiment intrigued me and prompted me to try it myself - not four different samples, but just the one with apples replaced every few days to give the booze a fresher flavor. A few days into steeping the concoction smells nice, so far - again, not rosy, no, but fine. Let's see how it turns out in a couple of weeks.


Next up: would they still smell like a rose when... well, never mind. 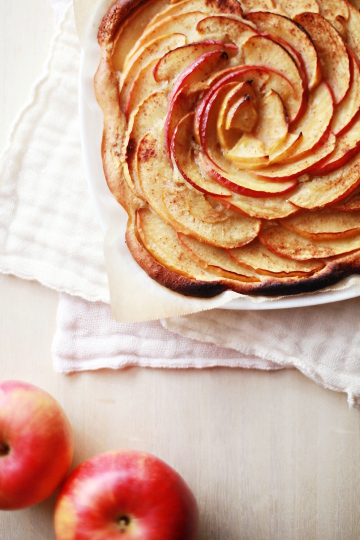 I knew they wouldn't smell like a rose when baked, but that didn't stop me from baking with them. I'm not certain if you have noticed from the picture, but here I attempted to arrange the apple slices on the cake to resemble a rose in bloom - not very successfully, I know, but well. And yes, I am certain that you have noticed that the cake was burnt on the edge, but otherwise it tasted good, even without a rosy scent. I will write more about this apple cake - or actually, "Finnish apple pie" as the recipe calls it - in another post.


And as though this hadn't been enough, I tried my hand at another this-is-supposed-to-look-like-a-rose thing: 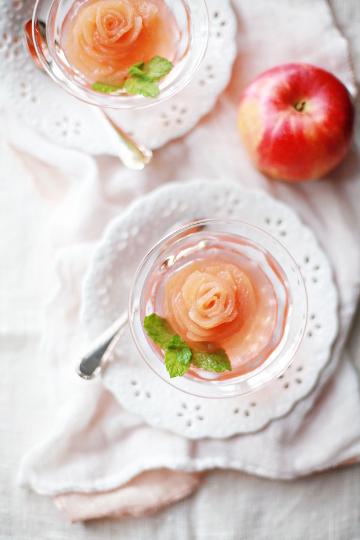 'Roses' made of apple compote blooming atop gelatin cups flavored with the apple compote liquid and rose wine. Perhaps I could call it 'apple-rose gelee with an apple rose', but that might sound a bit confusing or redundant.


Whatever you call it, it is basically just a gelatin dessert with apple compote and quite simple to make. Except it wasn't so for someone like me who is all thumbs with this kind of things (remember my disastrous ichigo daifuku? - there are reasons why you don't find elegant entremets or elaborately decorated cupcakes around here). Carefully putting together these 'petals' of thin, fragile slices of cooked apples in an attempt to make a 'rose' was definitely not my kind of thing - honestly, I don't know what got into me!


Anyhow, a little more about the dessert: the apple compote was made in more or less the same way I did with the apple jam mentioned above, by poaching thinly sliced apples along with the peels, as well as a bit of sugar, juice of lemon, and some white wine. I must say I was very tempted to add rose wine here to make the apples really pink, but didn't; this muted shade of pink was pretty in its own way, I decided. I did add rose wine to the cooking liquid for the gelatin part, though. 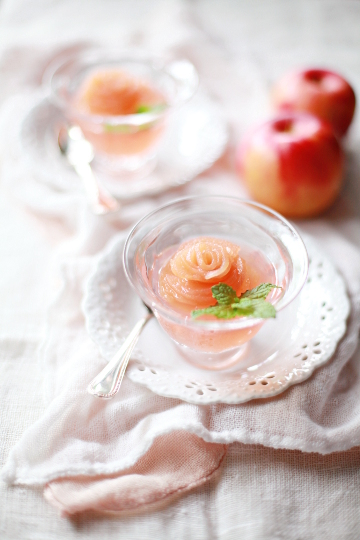 I think these apple rose cups managed to look reasonably pretty, and most importantly, tasted nice. I won't be in a hurry to try to give this roses-made-of-apples thing another try, but do look forward to baking more with apples. I tend to like apples eaten fresh, but one can only eat so many apples in one winter, and being in Nagano means there will be a lot of them in my near future. A few more peaches and some grapes, and I shall be ready for apples.

Everything you make is such a work of art -- love LOVE the gelee idea!

You are an artist! I wish I had your creativity!

wowza, those photos are actually stunning. very talented. so glad to have discovered your wonderful blog.

They are really beautiful! all of your pictures and your ideas are great!

I love your photos ...and I must tell you I love apples So here you gave me a lots of ideas ! Thanks for sharing with us bye, Ste

what a nice composition Chika san :)

Your photos are so beautiful and dreamy!

How beautiful! I do love your way of composing posts and pictures. Nice crispy fall has come here in Japan, hasn't it?

What a fun concept, rose apples, bred to smell nice =) they look beautiful too. Your apple compote looks beautiful.

BEAUTIFUL... I cannot take my eyes off these pictures (well, I mean, I have long enough to leave a comment, ha) lovely blog, I will definitely be back...

Everything is beautiful!
I am so amazed, I just discovered your blog and am alreadu addicted!