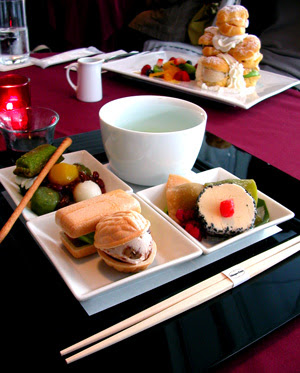 It's been quite cold for May over this past week, and it was this one week that Japan's Haagen-Dazs did a one-week only event called Haagen-Dazs Premier Lounge in Tokyo, in which they opened a small cafe and served special ice-cream platters exclusive to this event. My friend Namiko and I went and checked it out on one cold day.

It was a weekday afternoon but the place was full. We didn't have to wait too long though and got seated in a matter of ten minutes or so. They've got a menu featuring ice-cream sets inspired by several different countries' cuisines such as Italy, France, Argentine, etc. I had already known what I was going to have and I followed it through. 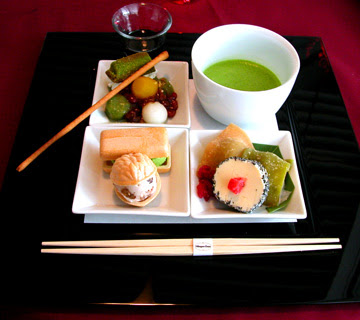 This was the set called Wa la carte - in Japanese wa often refers to Japan or something Japanese. As its name suggests - and as you can guess from the picture - it was a Japan-themed set. Here it went: 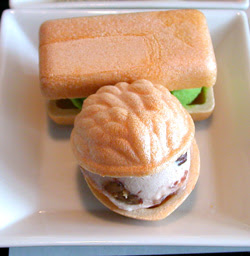 First plate: thin-wafer sandwiches filled with matcha (green tea) and adzuki (red bean) ice-cream, or monaka. Monaka is a very traditional Japanese sweet which is most often filled with sweet bean curd, but ice-cream monaka has been pretty common for the last couple of decades at least. 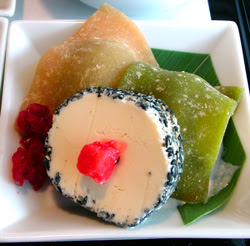 Second plate: vanilla ice-cream sushi roll "wrapped" with black sesame seeds and "filled" with frozen strawberry, served with "gari ginger" made of raspberry jelly; and yatsuhashi filled with matcha and adzuki ice-cream. Yatsuhashi is cinnamon-flavored thin mochi sheets filled with, again, sweet bean curd (oh it's everywhere in Japanese sweets, give me a break!), and is a very popular Kyoto sweet. 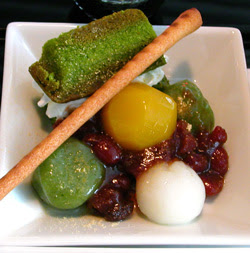 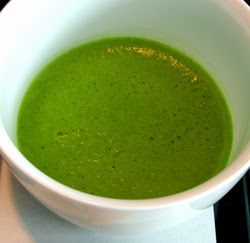 And a cup of real matcha green tea. You may notice a difference from thinner ryoku-cha green tea that I wrote about a while ago. This is a traditional way to serve matcha tea, in which a small amount of strong (unsweetened) ultra-thick tea is served in a large bowl. It was a small but nice cup of sips that helped me take a break from intensive waves of sweet and cold treats.

All in all, there was nothing really new about this limited-edition cafe, in terms of the flavors ice-cream they served there; there was no limited-version flavor exclusive to this event, but it was more a matter of how they present it, whether it be by serving it in a Japanese-style set of dishes or in cream puffs (like the one my friend had, which you can see in the first picture). It was nice though, I wish they do this more often and for a longer period of times - and hopefully in the warmer weather (sneeze, sneeze).
posted by chika at: 5/15/2005 09:10:00 PM

hello chika! you wouldn't happen to know how to make the wafers for the monaka, would you? everything looks so beautiful but i can imagine being quite chilly after eating this on a cold day.

That looks really delicious! I guess it's the presentation that just sucks me in. I love wagashi! Thanks for sharing.

Oh so pretty! Looks so elegant. I love the whole idea of a dessert set.

And I can't help wondering... what did you friend have in the distance eh? =)

hi chika,
is there an email address i could reach you at? i'm writing my honours thesis on food blogs and would greatly appreciate you input =)
cheers, ling

I am staying in Tokyo too and love to seek out nice food places here. The Mango Tree in Marunouchi Building serves great Thai food. There was a Thai festival last weekend in Yoyogi Park, wonder if you had gone there. I had made my own fried carrot cake in sweet black sauce last week. Luckily, it turned out fine. If you are free, do drop a line :-)

Hi Chika,
this looks soooo yummy! As I'm addicted to ice-cream (especially Haagen-Dazs) I'd really love to try everything captured on your wonderful photos! We do have Haagen-Dazs here in Munich, but I never heard anything about special events ;(

Oh how I love the food in Japan! They need to have something like this in Hawaii. Maybe I can do soamething about that huh?

Wow. These look amazing. I think I share every one else's sentiments when I tell you how jealous we are! The Singapore branches of HD don't offer anything quite so cute or creative. They do have some great ice cream cakes (my fave is the Caramel Cone Explosion), but other than that, the parlours here are pretty standard. By the way, I adore your blog! It's one of my daily must-visits!

Yum!!! Japanese food!!! Not fair, we dont get this in Australia!

Really nice photographs too! Did you take them yourself? They look like they came right out of a magazine!

Thanks for helping me with my diet! =)

I need to have some ice cream right now.

I am soooooooooooooo soooooooo jealous :(
I have been on a matcha mission of late, I cant wait til I go to Japan and get to try some of that stuff.

Hi Chika. Those desserts look heavenly and since it's heating up for summer, it seems that everyone is in the mood for cold sweets.

Hello, chika.
You know that your blog is one out of what I like the most. Especially your picture is always fantastic.
It incite our appetite.
This time, I open my blog. visit me, welcome you.
See you more often

Your blog is my very favorite site on the www. My mother is Japanese and your attention to detail and the phrasing in your blog remine me of her gentleness and of everything Japanese. I feel as if I am entering a very familiar place. Thank you so much.

it's looks almost too good to eat!

This is awesome! It doesn't just look pretty and inedible, it looks delicious. Very Cool.