in praise of cherry blossoms 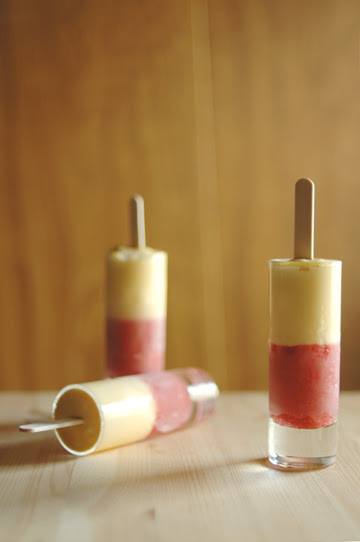 Last year, I missed Tokyo's cherry blossom season because I was in the other hemisphere around the time. Instead I sought an image of the flower in something pink I had then... rhubarb, that is (quite a stretch you think, but oh well).

For the better of for the worse, I am in Tokyo this time this year, and yet I found myself grabbing it all the same... rhubarb, that is. 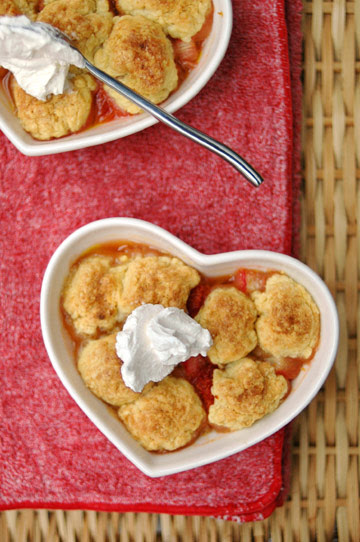 Except this time I only got a stalk of it. Not a bunch, not a bag, but just one single large stalk of handsome rhubarb that I managed to find cost me handsome 800 yen (about 7 bucks, and 10 with my transportation expenses added - I must really have been being serious and desperate, which I was).

So I had the great courage to grab one home with me, and turned my expensive acquisition to something extraordinarily... simple. 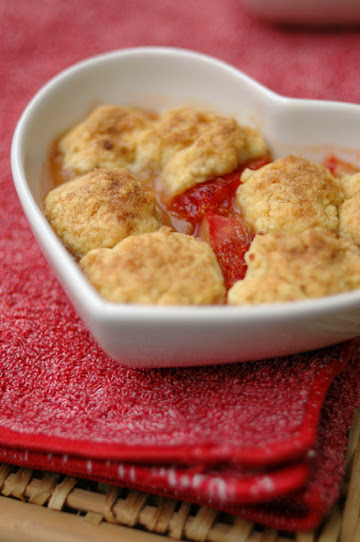 The oranges I used were from Italy and had the flesh only subtly tinted with red, rather than that dark, really "blood"-like shade some Californian blood oranges would have. Yet the rhubarb nevertheless took on the color and the whole thing nicely burst with juicy pinky red. Pretty! 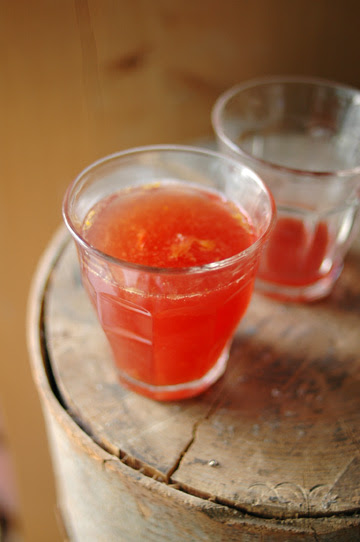 Now originally, I had to get rhubarb because I had the blood oranges first, and wanted to try the cobbler. My local stores failed to carry rhubarb when I first went out for it, so I ended up having to do something with blood orange sans rhubarb. That was when I fixed this concoction - sparkling wine with blood orange and pomegranate juice.

This was based on an aperitif I had at Petersham Nurseries cafe restaurant one afternoon, and although theirs looked a lot fancier and tasted sweeter (lovely all the same, of course), my quick fix wasn't all that bad, either... well worth a fuss, if at all. (And by the way, I have been struggling to find time to do a post or two about the lovely Richmond nursery for ages... apologies to those who have been expecting one, I haven't given up yet!)

Now, now... I couldn't justify buying 10-buck rhubarb just for making cobbler, if you know what I mean (call me stingy, I am it!). In the natural course of events, I saved about a half of the worthy stalk of vegetable and used it for something else - something totally different. 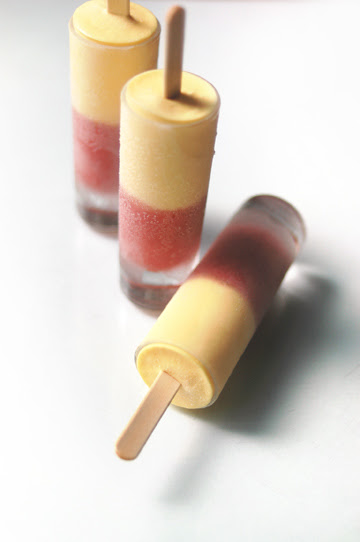 Looking cute and fun, Rhubarb and Custard Iced Lollies were what caught my eye among some recipes by Jo Pratt, a British chef who has just released her first own cookbook (she had co-authored one before). The recipes I got weren't directly from the book but from a newspaper column she had on a "Sunday supplement with one of the newspapers" they have in the UK - to tell you the truth, I don't exactly know where it's from as my English buddy just forwarded them as an attachment to an email (thanks).

Anyhow, when I saw the recipe I thought the way ice pops are sticking upside down in shot glasses was really cute, and that this would be a good reason to buy some rhubarb (no matter how expensive it can be!)... needs must. 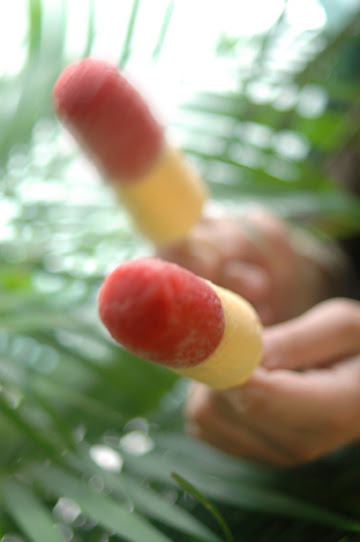 They are basically frozen layers of rhubarb puree and custard in shot glasses. Now as I didn't have that much of rhubarb to spare, I mixed in some strawberries to the rhubarb and managed to produce three ice pops. For the custard part, by the way, I just made it from scratch even if the recipe calls for "bought, ready-made" one... for your information, ready-made custard can't readily be bought from the store over here, and making your own makes a lot more sense than hunting for one.

As much as the name "lolly" itself, the combination of rhubarb (plus strawberry) and custard, to me, seems utterly English... even if I have actually never eaten lollies in the UK. I liked my lollies a lot, except maybe for the fact that it was rather tricky to eat the fruit and custard part in one go (I could have poured the mixtures alternately into a glass to make more than two layers, but I couldn't be bothered). Having had yet another warm winter, we had expected cherry blossoms to come into full bloom in as early as the mid March, but the abrupt chill cut in and delayed it, which made the flowers bloom only this past weekend. I didn't have time to go out and have a binge under the tree (that's one of our traditions, apparently), but at least took a few minutes to admire a last bit of the short-lived beauty in my neighborhood. I've posted just a few photos of the flowers here if anyone fancies, but for more "proper" Japanese cherry blossom views, you can turn to my old post about my grand day out in sakura-filled old town Kyoto.

One last thing before I shut up, about something completely unrelated to cherry blossoms; 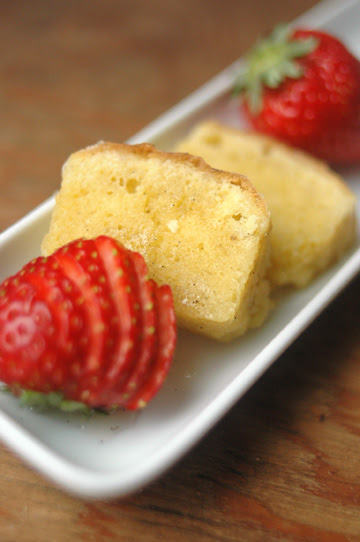 A small vanilla bean loaf that I made after seeing the blossoms. The recipe I used is from my long-loved book called Cooking for Mr. Latte: a food lover's courtship, with recipes by Amanda Hesser (2003, W.W. Norton & Co.), but she gave credit to Rene Becker of Hi-Rise Bread Company in Cambridge, Massachusetts for the original recipe. Flavored with vanilla beans, vanilla sugar, and vanilla extract (which I skipped) in the batter and finished up with vanilla-bean syrup, the cake really burst with the fragrant vanilla, although tasted almost as sweet as sugar itself, even if I had cut down the sugar in the batter by half and used less syrup... oh well, what can I say, it was still yummy.


In the Sunday morning when I was out for the flowers it was warm and sunny, almost early summer-like weather, but by that evening the rain and winds swept over Tokyo area... I don't even know if blossoms are still there. I should probably consider myself lucky to have at least been able to shoot a glance at them, and might just have to cherish the memory and images of the blossoms... yes they are indeed very special to us. 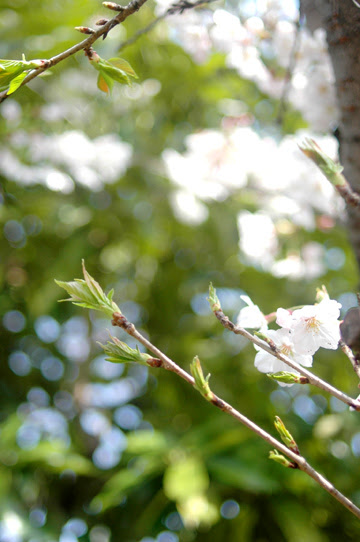 Beautiful pictures - each one reminds me of Spring more than the next?

Your photos are great.
I love those lollies!

Hi Your food blog looks great and you have some lovely recipes, I will be back to visit you.

happy easter to you ms. chika! i only had one opportunity to buy rhubarb this year and didn't do anything near as exciting with it. ah well, it was still tasty.

hi chika! i LOVE your blog and especialy your photographs. they are so inspiring and they have a japanese aesthetic which i LOVE! thanks for sharing them...i also love the rhubarb and custard lollies in this post. mmmm...

hi there, thanks all for dropping by and happy easter!

oh what a beautiful post,lovely pictures and definately making me want those lovely treats ! Happy easter.

Hi! I've been looking at your pictures and they are really impressive. Could you please tell me what camera do you use? Thank you so much!

God you take gorgeous photos, Chika. Those are stunning.

Oops, didn't mean to sign in anonymously --they really are gorgeous!

Hi Chika, I just stumbled across your blog for the first time. It's tasteful and so beautiful!! A great saturday morning visit. Thanks.