in place of cherry blossoms 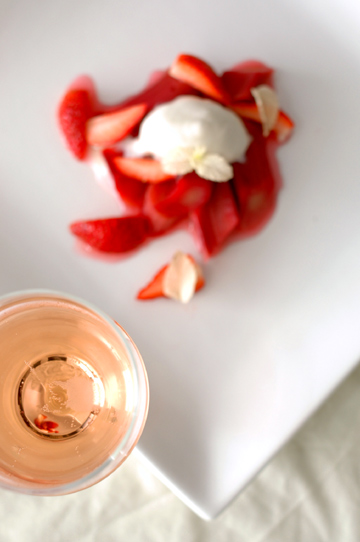 At about this time last year, I was in Kyoto to see cherry blossoms blooming. This year, since I am at the moment here on the other hemisphere where it seems as if the summer turned directly into the winter, there is no post of cherry blossoms here. Instead, I've got something seasonal in pink at least - namely rhubarbs.

When it comes to an easy fruit treat, one of my usual suspects is crumbles; 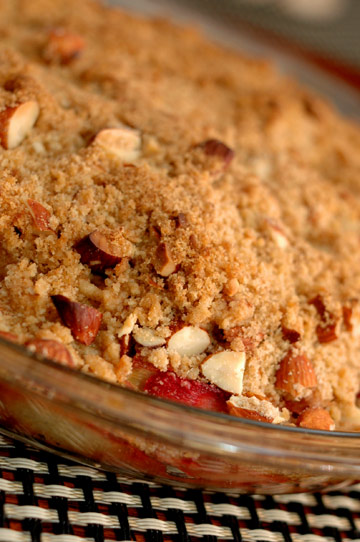 And slightly gingered crumble happens to be one of my favorite way to eat rhubarbs. I've got my staple recipe for crumble base, but this time I used one by Delia Smith, which isn't remotely different from my own version anyways in that both uses almonds and ginger, though I left my almonds pretty chunky rather than finely chopping them. 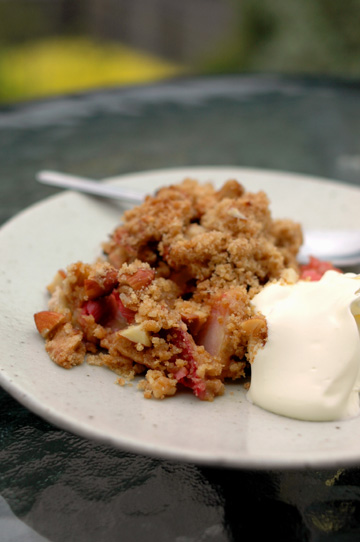 This time I mixed in an apple for a texture, but it made rather moderate difference. I also served it with double cream instead of ice cream, which would be what I usually have with my crumble.

Speaking of rhubarb crumble with ice cream, how about giving a bit of twist to its composition; 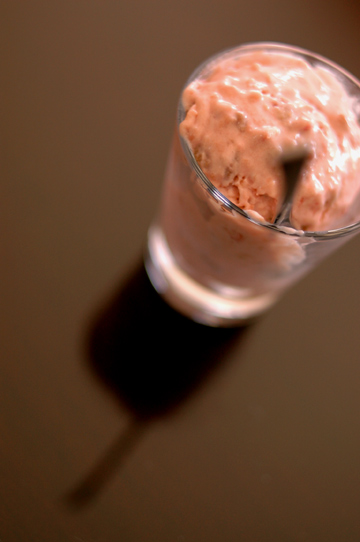 Rhubarb crumble ice cream, whose recipe I happened to find when I got the Delia Smith rhubarb recipe mentioned above. It is basically ice cream made by mixing gingered rhubarb puree with cream, with crumble base broken into pieces mixed in, in a manner that you make cookie & cream ice cream. Funnily enough, when I made the rhubarb puree, it smelled and tasted like strawberry puree; and the ice cream did actually taste like strawberry or raspberry one. It was easy to make and very tasty, so I'll probably make this again, although I'd rather top rhubarb ice cream with crumble pieces rather than mixing them into the ice-cream base, because that way I'd get more of crunch from the crumble.

Okay, now here's something NOT crumble-involved; 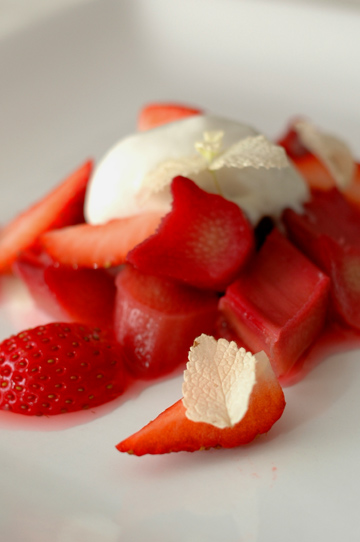 Champagne-poached rhubarbs with rose water, served with coconut sorbet and fresh strawberries, which may sound rather swankish for something I make. Admittedly, the recipe I found in the March 2006 issue of Australian Gourmet Traveller is by Philippa Sibley, an Australian pastry chef currently at a renowned Melbourne eatery Circa, The Prince. So it is certainly a restaurant-dessert type of stuff, specially if I had made sugar-coated rose petals as suggested in the recipe, which I didn't bother. Then what's left was quite simple; all I needed to do was to mix rhubarbs with sugar and a dash of rose water before baking them with sparkling wine, and make lime-scented coconut sorbet, with which I shortcut several steps and simply blended coconut cream, syrup, and grated zest of lime and churned it in an ice-cream maker. 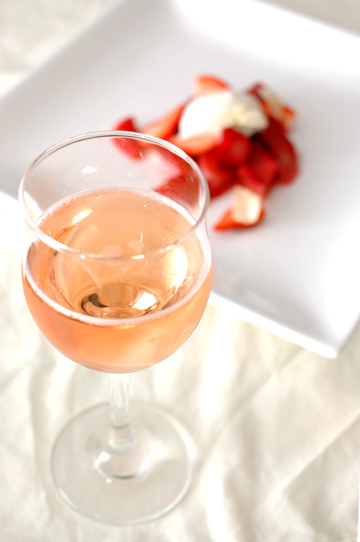 The recipe used a regular white sparking wine, but I used a pink one which I served with the dessert. The dessert itself was quite sublime; the combination of rhubarb and rose was very charming, and I actually smelled and tasted sparking wine; cooking rhubarbs with the wine at a relatively low temperature seemed to manage to reserve the delicate scent of wine quite well. It also worked well in making the texture of the fruits just right; the rhubarb chunks held their shape beautifully, and were tender but not mashy.

Since I liked the scent of rose in rhubarbs, I might try it in something else, such as rhubarb cobbler with rose-scented cream by Claudia Fleming (whose recipes seem to be the flavor of the month among a lot of fellow Japanese food bloggers these days)....
posted by chika at: 4/08/2006 01:50:00 AM

Beautiful pictures. I just made a similar crumble, no apple though, only strawberries and plums! I am mouthwatering now!

I have been reading your blog for some time but I think it's the first time I post.

I love your photos, they are so beautiful!
Yours is among the blogs which made me want to make my own.

I was wondering what are the things that looks like whitish mint leaves on the champagne-rubarb thing?

Hi Chika, just discovered your blog and I am amazed how beautiful and great are your photos and recipes. Wondering what is your job : can you help ?

As always, beautiful recipes, gorgeous pictures, and everything so much poetic!
You blog is my favorite, and i'll discover food blog thanks to you...

Hi Chica..
I absolutely accidentally stumbled onto your blog and after going through all your archives and reading every post and oohhing and aaahing over every picture.. i have to say you have a super duper blog. Would have ideally liked to mail but will leave this comment instead. Do keep up the posts. I will come back again and again.. Am actually very curious to know as to whether u are in the food based business or do you cook so elaborately, out of the passion for the art?

WOW! I am totally blown away by these images and recipes! I have been trying to document Japanese Cuisine on open source web site. I could really use your help! I am doing my best, but I am here in America and only know what is offered here and what I can dig up on the internet! So, I am pretty sure my information could be more accurate.

If I were to ask you... Does this page accurately represent Japanese Cuisine? What would your answer be?

Is there anything you can think of that I may be missing?

Any input is greatly appreciated! Also, my site is 100% opensource and community driven. If you would like to preserve or back up your recipes, let me know! You may contact me at: wikimanager@yahoo.com

Beautiful! Just discovered you and am relatively new to this form. Am Japanese (half) and have Australia/NZ on my "most definitely someday" list. I've been told by Oz friends that Melbourne is the new food capital of the world. True? Did you make the white chocolate leaves? Impressive.

I write in two blogs one is nice the other less so b/c I'm not bound by rules of the check signers...
http://suite101.com/foodanddrink/ - I'm their gourmet food writer.
the other
http://Leatherdistrictgourmet.blogspot.com
stop by!

i love your pictures. so bright and rich in colour.