last weekend of the year 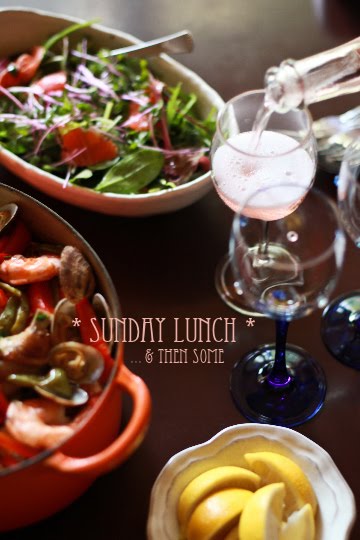 10 a.m.: Breakfast - a couple of slices of stollen(-ish bread) I'd baked for Christmas, using the bread machine. Not the greatest piece you can ever find, but fine enough.

8 p.m.: After a nap comes "coffee break" with a few small slices of fruit cake I'd baked about a month ago, using the fruits I'd soaked in booze back in September for Christmas.

10 p.m.: Finally, dessert - panettone tiramisu, or something like that, with season's first (!) fresh strawberries; served with a glass of elegant & smooth Moscato d'Asti, to wrap up the day of going slow, enjoying food and spending time with family.

3 a.m.: ... And a bit of alone time at the dead of night, with a few spoonfuls of honey ice cream with deeply boozy, honey-sweet dried fruits and almonds (and the booze - a.k.a. "liquid panettone; here is how I prepared it a month ago). Not a bad way of ending a Sunday.


I didn't really have anything planned for Christmas this year. It didn't occur to me until the 24th, but somehow I decided to cook Christmas lunch for three of us at home. It didn't take too long for me to decide on the menu as I was for something easy and casual, and off I went to neighborhood supermarkets to shop for the ingredients I needed.


And it was in that evening, on the Christmas eve no less, that I fell sick - probably stomach bug I assume, but I managed to spend a whole day curled up in bed on the Christmas day, unable to eat much - let alone cook. Not the best Christmas day that I've ever had, let's just say, but as they say, **** happens.


But it was lucky that I didn't seem to catch influenza as so many people appear to be out there. On late Saturday I was starting to feel better, and by the following morning I was able to get out of the bed, ready to cook. I had almost all the ingredients at hand, and some were perishable and needed to be used quickly. Christmas was over, but it was Sunday so I could settle with Sunday lunch, I decided. At least it should save me the effort of trying to make the table festive as I would have had to, had it been actually a Christmas lunch, I reckon.

My main was paella - or a distantly related cousin of it. I started with this recipe for Dutch oven paella, but made more than a few changes - most noticeably, I skipped saffron. So I think this did not qualify to be called "paella" any more, but it tasted good nonetheless, despite my stupid mistake of using too much water to cook (I disapprove of soggy rice unless it's porridge).


Everything else was put together while the rice was cooking in the oven, except for the bread which had been baked in the night before. Breadsticks were wrapped in slices of Parma ham (I forever owe Anthony for introducing me to this little trick for an appetizer that everyone loves when he cooked terrific dinner at his home in Perth).


Meanwhile, the salad was a breeze to prepare as a bunch of mixed greens were simply tossed in juice of lemon and olive oil, salt-and-pepper'ed, and nestled in a serving bowl with slices of smoked salmon. As for the octopus and mushrooms - well, if anyone is interested, it was easy to throw together as well; you prepare the butter by blending softened butter with chopped raw garlic and parsley; then you fry mushrooms in olive oil, add chopped (pre-boiled) octopus and fry a bit further, and add the garlic-parsley butter just before removing from heat. My mother saw something similar on TV a while ago, and has been making it for us since - we all love it. It goes really well with both bread and rice.

I had my family start with beer about an hour before the lunch was ready, serving them some bread and breadsticks. I warned them not to fill themselves up too much with them as the big rice dish was coming, but not sure if they heard it! Oh by the way, the bubbles was Sparkling Moscato Rose - I'd thought it'd make a nice aperitif but perhaps a little too sweet to go with the dishes; it was. So we opened more beer, but had no trouble finishing up the rose in the end!


I was planning to serve dessert - panettone tiramisu - right after the lunch, but we were really stuffed - and besides, the sweet rose sort of worked as dessert for now. We chatted away, dozed off for a while, and finally ready to have a small slice at ten o'clock (well, we did have some fruit cake before...). I'd in fact prepared it the night before (fresh off my sick bed!), but the whole thing was really easy to make, just a bit of cutting up and mixing up...


Panettone Tiramisu with Fresh Strawberries
Slice up panettone into small squares, ends trimmed off.
Lightly whip heavy cream and fold in some mascarpone cheese, and lightly sweeten with honey.
Bring to boil some white wine in a saucepan and stir in some honey, and leave it cool.
Puree a few fresh strawberries and sweeten with a bit of honey.
To assemble, dredge half of the panettone slices in the cooled wine 'syrup' and line the bottom of a pan with them in a single layer.
Spread half of the strawberry puree over the panettone, followed by half of the mascarpone mixture.
Repeat with the remaining half of panettone, strawberry puree, and mascarpone mixture.
Cover and chill in the fridge preferably overnight before serving
Serve slices with fresh strawberries and dust with confectioner's sugar.

I assume this would be a nice way to use up any leftover panettone that may be sitting around after Christmas - not that it's hard for me to finish them simply toasted! I served it with the lightly fizzy Moscato d'Asti (which is often served with Panettone, I was told) and it added just the right amount of sweetness to this not-overly-sweet dessert.


Speaking of panettone - well it can be a long story, but I've somehow been obsessed with "experimenting" on baking panettone in the bread machine - or maybe I should say panettone-like bread. From the amount of yeast (a kind specially made for panettone) I've used, I have apparently baked around 30 loaves of the stuff over the period of a month and a half (!). I'll spare you the details here (I did elaborate on this on my Japanese blog), but I've never managed to make mine really like the real panettone, although I think I have managed to make it as I like it.


Anyhow, this whole experimenting thing left me an abundance of panettone(-like bread) at any given time over the past month, and in particular around Christmas; at one point I baked six loaves in two days. So it proved quite handy to know a recipe or two to consume panettone other than toasting a few slices.

So on the following Monday, I made some french toast with panettone - another thing that I had planned to do on Christmas day but never happened. The recipe I used is this one; the batter is light compared to some others, which worked out nicely with the rich panettone. Orange and spices gave the bread a warm aroma perfect for any wintry morning, before or around or after Christmas.


... And when I thought the weekend was just over. another one is around the corner, this time with another year (gasp!). I honestly have no idea how and where the year has gone so quick, but as I type this, it is indeed the last day of the year where I am. Which makes this the last entry of the year around here, so let me finish by wishing you all the very best for the New Year. This is nothing but a small, personal place of mine on the vast cyberspace, but it wouldn't be the same without you popping by every now and then. So thank you.

i like your style! very good looking feast....slow too which is what it is all about. Dayle

Happy New Year. And cheers to another year of your beautiful blog. I enjoy it so much. It's truly an oasis in vast cyberspace!

thank you all & a very happy new year!! x