a new year, a new look 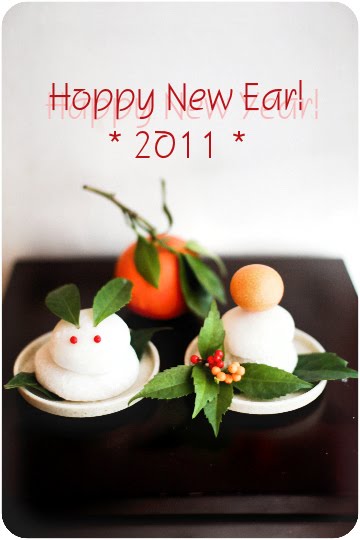 What, am I the only one who is still saying it? But being Japanese, we wish each other a happy new year roughly until the middle of January (upon seeing each other for the first time in the year, anyway), so here goes: Happy New Year & Best Wishes for 2011! I hope you've all had a good start to the new year.


As for me, I've had a few restful days for the most part, and spent a lot of time in the kitchen, cooking some New Year dishes...

It is customary for us to celebrate the New Year's Day with a big feast for breakfast. We don't do one of those elaborate osechi ryori dishes as many Japanese families do, but I got us a few pre-made osechi dishes, grilled a red sea bream, and made a zoni soup, which is probably the only real New Year dish we never fail to make in my family.


Zoni, or o-zoni, is a soup with mochi (glutinous rice cake) and an assortment of meat, seafood, and/or vegetable. Exactly what goes in the soup varies widely among different regions - in fact, among families, too. In my family, we usually make a clear broth with katsuo dashi stock, use a bit of chicken, daikon radishes, and carrot, as well as a few toppings such as mitsuba (a Japanese herb) and thinly-sliced yuzu peel.

And starting a several years ago, I now top the whole bowl with an assortment of slightly fancier ingredients, including salmon roes and large prawns. It is my way of glaming up our single most important dish for the New Year for the occasion. The picture above obviously fails to capture the intended grandeur of the dish, but it's normally like this (from a few years ago).


And yes, we do drink at the breakfast - and often continue on throughout the day. Traditionally we start with otoso (although it's not always spiced as Wikipedia describes but often simply just plain sake), then move on to beer - or in my/our case, sparkling wine. But for this year, I got something a little different - non-alcoholic, even (!).

Coming in a pretty bottle like a one designed for champagne, it's a sparkling white jasmine tea named Golden Star Tea. Lightly sweetened and slightly fermented in a method used to produce sparkling wines, it makes a most elegant drink that's festive enough to celebrate this special occasion, for regular wine drinkers and non-drinkers alike. Let's just say it was refreshing not being all that drunk for the entire day!


After the big breakfast (more like lunch), we spent the rest of the day lounging around - nibbling on snacks, reading and writing nengajo (New Year greeting cards), perhaps drinking a bit more, and cooking some more in my case.

Our New Year celebrations - or indulgence, both in terms of food we eat and leisure we have, last for the first three days of the year, before that festive feelings start wearing off and things start going back to normal, much to our chagrin.


While we do dread going back to work, we are sort of already tired of all the rich food by the end of the New Year's holiday, as a matter of fact; we tend to crave for something simple and light after all the overindulgence that started on the New Year's eve. And I cooked something that just fit the bill - simple, maybe not exactly, but light and a bit different from what we've eaten for the past few days.

It's a herby and spicy soup with noodles and beans, and it's a recipe shared by the ever so inspiring Heidi, whose recipes never fail to deliver (and happen to be vegetarian!). It's called New Year Noodle Soup, and I just had to make it when I saw it.


Flavorwise, the soup is spiced with turmeric and cumin, topped with cilantro (coriander leaves) and dill, garnished with caramelized onion and walnuts, and finished with sour cream and juice of lime. The list of ingredients is long, true, but like Heidi promised it was all worth it. To be perfectly honest, as I was making the broth I wasn't too sure how it'd end up - it tasted a little too bland despite the use of the spices. But when I put everything together - herbs, garnishes and everything, the final results made the most satisfying layers of flavors that mingled so well in the bowl we couldn't help but wolf it down. I admit that I skipped a few of the ingredients (borlotti beans and cilantro), substituted some more (lemon for lime) and added a few extra things (ginger to the broth, and sesame seeds as a topping), but the dish still came out beautifully.


A bit special without being too precious or complicated to make, this was a perfect dish for wrapping up the three days of celebrations - and starting another year that I hope will be filled with a lot of cooking adventures. And I hope I'll be able to share many of them here. Here's to a wonderful new year to all of you!

P.S. I trust that you've noticed a little change around here on this little blog site of mine? Well, after almost seven years (!!), I have finally given it a bit of face lift with a tremendous help from my talented sister Yuka. I hope you like it as much as I do! -cx
posted by chika at: 1/03/2011 09:13:00 AM

Lovely new outfit, Chika! And thanks for (yet another) appetite-whetting post.

In France, you have until January 31st to wish people (those you haven't seen or talked to yet) a happy new year... Best wishes for 2011!

明けましておめでとう！I like the new 2011 look, and am jealous of your osechi ryori (even though I have to admit we had fondue).
All the best for the new year!

Happy New Year! Your post is beautiful as always. So nice to always know to visit your blog there will be a beautiful, relaxing view.

May the new year be more delicious and adventurous than ever. Please keep cooking, shooting, eating, and blogging.

Your site is lovely and your post absolutely adorable. Happy New year and keep on writing!

Happy new year! Ozoni is one of my favourite new year foods but ours is a lot simpler (just some hakusai, shiitake and omochi in a clear katsuo broth). Yours looks TOO delicious. Love the new look too:)

Happy New Year to you, love your photos as usual.

Wonderful photos. Wishing you a delicious 2011!

The dream of the real Japanese experience.....Happy New Year to you. May 2011 bring lots of joy and wonderful things. Tasty, of course, not doubt.

in the south (the states), we have a set new year's brunch or dinner of shrimp and grits (like oats) and a bean salad ("hoppin john").
but i wish we ate japanese food instead XD

Wow. Delicious foods to start the year. Thats a good way to start 2011. More power to you.

Love the new look. Happy New Year Chika! Wish you all the best in 2011.

Nice! Happy new year to all, and fingers crossed for a great 2011!

lovely thanks to all for your new year's wishes and compliments re: the new look here! extra happy 2011 to you all. cx

Happy Belated New Year! Wow your strawberry shots are stunning...was trying to create the same effect but yours are amazing.