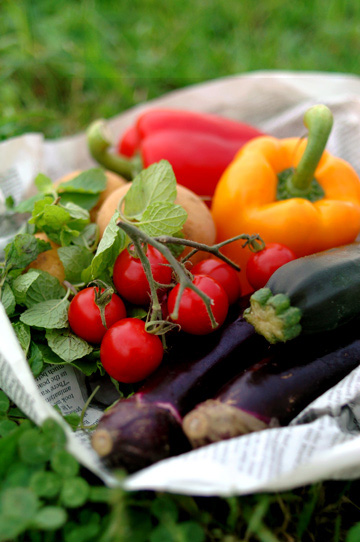 Been hot, been wet, been gray - that's what's all about the rainy season here in Tokyo. Can't bother to go out in the rain (thank god I'm not a nine-to-five office worker, even though I am supposed to be working from home for longer hours anyways) but when I saw some brighter sky through the windows on Saturday, I just had to go out. We need to photosynthesize every now and then, I suppose. 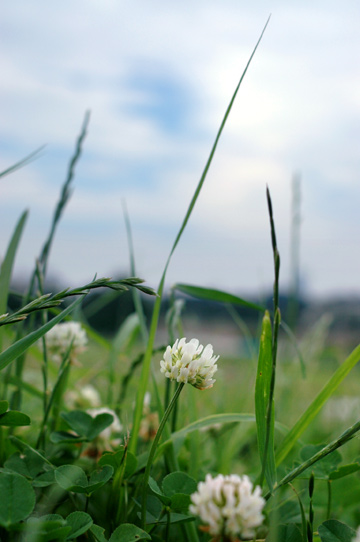 I rode my bike, got some fresh air, and bought some summer veggies for dinner that evening - I hadn't gotten around to cooking a proper meal for some time. 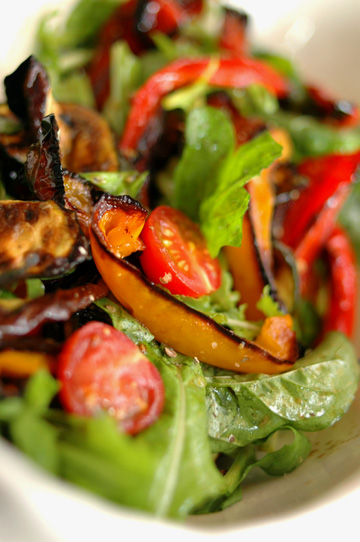 Well, by "proper" I mean anything more complicated than making some simple hiya-yakko or chilled tofu (not a fancy one like this), so even a salad could count as a proper dish, I reckon. So I made ourselves two salads; one was this summery vegetable salad which combined grilled zucchini, eggplants, and bell peppers with plum tomatoes and arugula, dressed with mustard-based dressing. Slow-grilled vegetables render wonderful sweetness, which would be matched nicely by a sharp mustard and slightly bitter arugula. 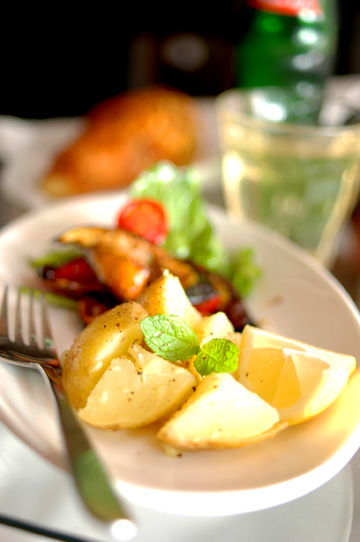 The other one is called minted potato salad. To put it bluntly though, this was simply boiled potatoes, slightly sophisticated way. Basically, you throw a good bunch of fresh mint into a pot of potatoes in the water, cook as you'd normally do, drain and discard the mint, dress the potatoes with olive oil and a fresh squeeze of juice of lemon, and season with salt and pepper. It was that simple, but I loved it - I loved the way mint didn't make the whole thing taste like a toothpaste but just subtly add that distinctive sharp and soothing scent of mint to the tender potatoes, which was complemented by the fresh lemon splash. 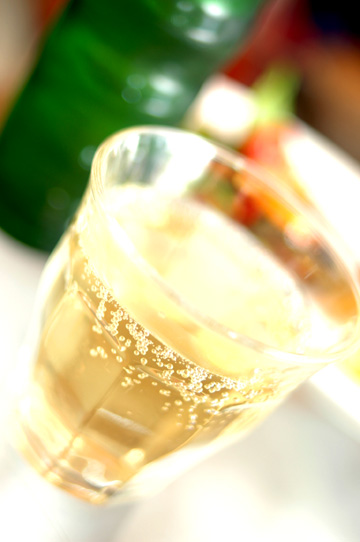 The salads were both appeared in a June 2005 issue of delicious. magazine (Issue 66), and although the article included these as barbecue sides, they made a light dinner just fine. And while the article suggested some white wines to go with these, which should make a perfect sense, I instead supped at a ginger ale and citrus-scented green tea cocktail. It was light and refreshing, although not as full-bodied as the Earl Grey version, which is my all-time favorite. 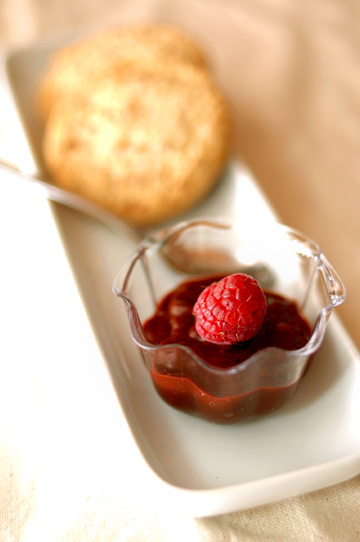 It seems like, if I bother to make dinner, I should make some afters, might as well; while grilling my vegetables, I whipped up raspberry ganache using pureed fresh berries and good-quality Italian dark chocolate. Although this was nowhere close to the original recipe, which comes in a form of tartelettes comprising of raspberry ganache in tart shells served with berry sauce and vanilla ice-cream, all home-made, the ganache was dainty enough by itself, and made some lovely nibbles along with some good nut cookies. 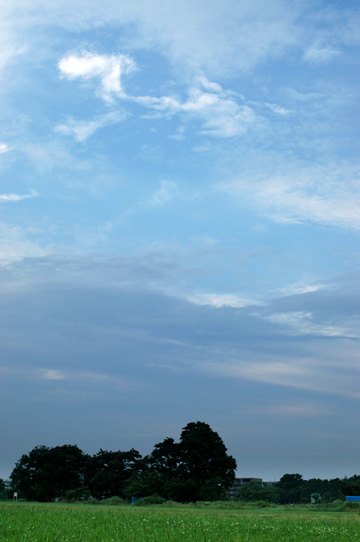 It has been only a week since the beginning of wet season was officially announced for Tokyo, I'm already feeling so deprived of blue skies, knowing how I will be tired of it once the long and hot summer actually comes in several weeks' time....
posted by chika at: 6/20/2006 01:11:00 AM

Delicious and refreshing! I feel I could have been on my bike there too! SO hot here on the other hand!

Send us some rain! (and some tasty food)

One very boring point - "mints" usually refers to the mouth freshening candy and "mint" is uncountable and refers to the herb
(gomen! gomen!)

bea - it was nice to get some breeze on the bike

Anthony - I would gladly do if I could!
Thanks for the words, I'm definitely in need of those :>

Hi Chika ! Just a word to tell you that I absolutely love your blog and all of your pictures, thanks very much ... and I also dream of going to Japan at least once in my life.

Posted by Steeve from Paris

Hi!I like your photos!it's very important eat something that is tasty but also very nice to see!
Lots of Kisses from Rome

Just beautiful photos, thanks for sharing!

I am Patrick from VegTomato again.
It’s summer time and need something to stimulate our appetite. Like your Japanese tofu recipes in the follow:

I am wondering if I can have your permission to introduce them in my website?

What an amazing array of produce and how fresh does it look? Beautiful photographs, they really transport you to another place.

Chika, I love all your photographs, what camera did you use to take these beautiful pictures?

hi chika.
the vegetables look so fresh it's so unreal and i love the veges salad, looks scrumptious and your photos are superb. :)

Sorry for my bad english, I just discover your blog and it's really beautiful... Yours photos are so great ! and yours recipes are original, colorfull, fresh, all I love actually. Good luck Chika :)

What a lovely post! Nice to feel such kinship with a cook so far away from my home in northern California. Actually, I've always felt an affinity with Japanese food sensibilities -- so fresh and clean and simple. I, too, have been depending a great deal on salads since the warm weather arrived. Your mention of chilled tofu has me inspired now...

I liked the photos! They are fantastic! The colors, the light, focus, everything is great! congratulations! I need to learn how to take photos of food!
http://anneminmutfakokusu.blogspot.com/

Hi Chika,
I'm a reporter with the Chicago Tribune newspaper and I'd love to
>> include your blog in a list of sites with beautiful photographs of
>> food. One question: What is your name and are you a professional
>> photographer? I can be reached at ttsouderos@tribune.com
>> Thanks!
>> Best,
>> Trine Tsouderos
>> Reporter
>> Chicago Tribune

Hi there, thank you all for leaving comments and compliment... it always means a lot to me! It's nice to see people like the salad, it was actually

Patrick - tofu a la mode's fine, but the tofu cream with mango is from a Japanese cookbook, so I am afraid I'm not the one to give permission...