chocolate & me: before the event 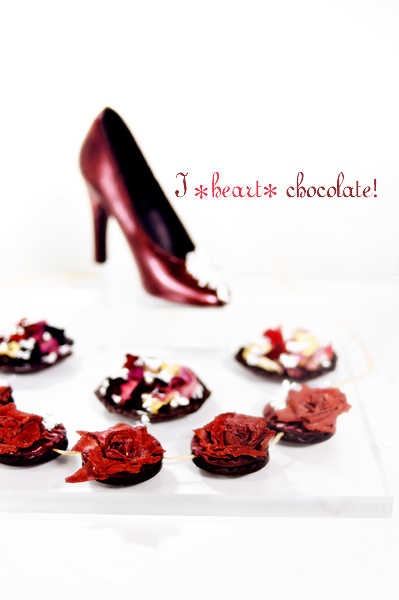 In the mid January every year, when people in Japan would have finally (and rather reluctantly) started getting over the New Year holiday spirit and the afterglow thereof, and perhaps forgotten most, if not all, of the resolutions they made in what seems like a lifetime ago, the whole nation (or just younger populations only, perhaps) are all turning their heads to the next big event that is about a month away: St. Valentine's Day.

When I was growing up many years back, February 14 was all about girls giving some chocolate as a sign of their affection to boys they fancy - and/or those they don't. This unique, rather bizarre 'tradition' around St. Valentine's Day in this country, has since evolved further over the years, and these days girls would get chocolate (good ones, usually) for themselves, in addition to - or instead of - boys around them. St. Valentine's has become just another excuse for girls to buy chocolate, as if they ever needed any such excuse.

And this year, things have finally reached to the point where boys are encouraged (by girls, or all the stores, or maybe both) to give chocolate to girls. Talk about girl power.


So the chocolate industry here is now focusing more effort on this event than ever, as they can now sell chocolate meant to win the favor of not only guys but girls, who indigenously love chocolate more than the male species do. And ladies favor fancy chocolate, especially if there is anything romantic about it.


Now, if I have sounded more or less bitter about the whole SVD thing, that's perhaps because of the fact that I never really had a particularly sweet experience around the event as a young, naive girl (won't elaborate). Whatever the case might have been, it has been quite a while since I last got some chocolate for someone on the day, and you probably won't see me doing so this year or the next, either. Not for St. Valentine's Day, at least.


Which doesn't necessarily mean that I would not seek for chocolate at this particular time of the year, however. Chocolate is a kind of food that you would rather have in the winter than anytime else in a year, and any excuse is welcome if that brings us better choices of the confectionery.


And there comes a string of St. Valentine's Day-oriented (and often commercially-geared) events in town from late January through mid February, particularly in major department stores holding Special chocolate sales, gathering all prestigious as well as up-and-coming chocolate sellers from all over the country and beyond. Perhaps the most notable of all may be the event proudly called the Salon du Chocolat, or Chocolate Show. 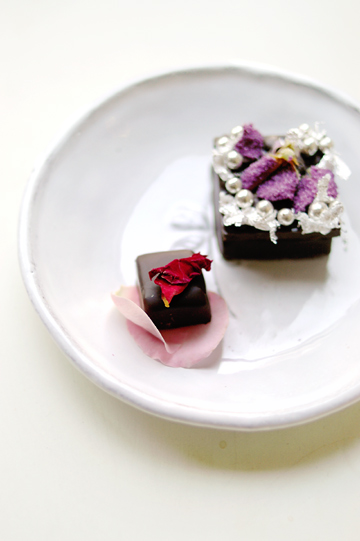 As its unmistakably French-sounding name suggests, it's an event originated in France - Paris, to be more precise - where it marked its 14th year in autumn 2008. In Japan, it was its 7th year in Tokyo, now followed by several other locations in the country; most (or maybe all) of them are hosted by major department stores, with two of the largest venues, namely Tokyo and Kyoto, both taking place at Isetan department store's respective locations.

The roster of chocolatiers and patissiers invited to the event usually looks quite impressive; when you are in Paris and visiting stores like Pierre Herme or Jean-Paul Hevin, you wouldn't expect to encounter with the celebrity chefs greeting you at the counter as you walk in. At the Salon du Chocolat, you might get such a chance to meet quite a few of them at one single event, without ever having to travel to France, or any other foreign country, for that matter.


That is perhaps why the event has been quite a success, drawing hundreds of thousands of visitors who would leave the venue with an equally large number of boxes of chocolate every year. And that is also the reason why I was never drawn to this event, or any other similar chocolate event, for that matter; the crowd.


In the past years, I heard and read so much about just how insane the Salon du Chocolat Tokyo would go; a massive crowd, dauntingly long lines, and outrageously expensive chocolate that can disappear from the shelves early on the first day of a week-long event. All this seemed rather overwhelming to me, and just a thought of myself being in the middle of the crowd was off-putting enough. No, thanks, I'd say; I never dared to join the crowd.


That was how it has always been as far as I am concerned, until this year when I received an email in mid January, from an aspiring patissier who said was planning to visit Tokyo over the Salon du Chocolat, and asked me where I would recommend to visit in Tokyo for extra-fine chocolates and pastries.


Now I must admit that I'm not the best person to ask such a question to, as I'm not exactly up-to-date with what is hot or not in the sweets scenes of Tokyo, which seems to be changing every quarter of an year or so. Yet as I was putting together information about things I like as well as those I think/heard/read would be good, I inevitably came to an conclusion that the Salon du Chocolat indeed appeared to be one great opportunity to taste some of the finest things as far as chocolate is concerned. And the more I looked into the event, the harder it seemed to become for me to pass on such a great chance.


So, that is how I finally gathered up my courage to venture into this tempting little world of chocolate this year. To me, it was destined to be a losing game in a sense - I knew once I'm in the middle of things, it would be too difficult for me to fight off ALL temptations to get hold of those beautiful chocolate!


And it turned out to be a fun; I got to sample a lot of fine chocolates and talk a lot about them with some dedicated chocolate connoisseurs along the way - and went home with a bag full of chocolate for later.

Now I was meaning to write about the actual show in today's post, and not my random ramblings around St. Valentine's Day business in general... oops. I guess it would be better to do separate post(s) about the chocolate I had at the show, but for now I am running the full list of participants at this year's Salon du Chocolat in Tokyo below, for a reference; the event site does not seem to keep it up to date (for Japanese locations at least).

* Outgoing links are accurate as of January 2009. (J) indicates the shop's website in Japanese, where available.

Oh my! they look so pretty! Chocolates and wine are definitely on my list this Valentines :)